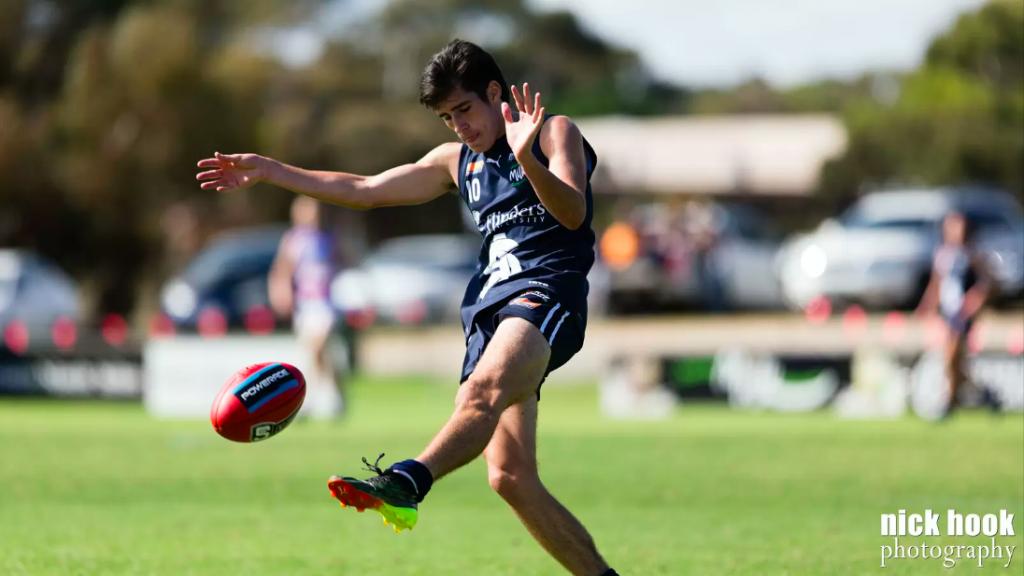 SOUTH Adelaide wingman Isaac Birt made his SANFL Reserves debut on the weekend, turning out in the Panthers’ enthralling four-point loss to Central District. The 18-year-old is part of South Australia’s Under 19 state squad, and earned his recent call-up on the back of undeniably consistent Under 18s form. He collected 11 touches in his maiden outing, and may have eyes on joining a trio of top-end Panthers prospects at League level down the line.

We put his Round 18 SANFL Reserves performance under the Player Focus microscope this week, breaking down what was a promising debut quarter-by-quarter.

Claiming a starting spot out on the wing, Birt made a steady start to life at Reserves level. He set up with separation on the defensive side of his opponent, watching the flow of the ball like a hawk on the outer and spreading both ways as it broke.

His first touch came via a sliding mark just inside the boundary on the outer wing, before darting a left-foot ball inboard to open his disposal account. Birt managed a couple more possessions for the term, flicking out effective handballs as South looked to move forward.

One of those handballs was earned via a hard ball get with good intent, and Birt went on to crash an aerial marking contest at half-back to show he would be up for the fight, despite being quite light. He notched four disposals (one kick, three handballs) and a mark in term one.

Taking his place on the outer wing once more, Birt showcased his ability to move into dangerous outside territory when the Panthers broke on the counter. He continued to work his short kicking game, contributing a trio of effective passes for the quarter.

Two of his kicks were sent inboard, with Birt taking the attacking option as pressure neared. A factor in that decision making was favouring his left side, which proved no problem given his sharp skill execution. It added some variation while maintaining the flow of South Adelaide’s ball movement.

In another period of play where he made use of each touch, Birt added three kicks and to bring his half time tally to seven disposals (four kicks, three handballs) and two marks.

The intensity of the contest continued to lift, with plenty of niggle about and pressure around the ball mounting. Even on the outer, Birt was made to think quickly and would have taken some handy learnings from the pure pace of the game.

With South Adelaide playing catch-up, the intent to move the ball on quickly was evident. Birt exemplified that with his trio of kicks in term three, looking to dispose almost immediately and hitting space on a couple of occasions, rather than direct targets as he had been.

His one touch in a bit of space was a mark at half-forward, which resulted in an inside 50 entry – his only one for the day. Overall, Birt contributed those three kicks, one mark, and one inside 50 across the 26 minutes.

Birt made a relatively busy end to the game, notching up another three uncontested marks and finding his way into either arc. He showcased his work-rate to run forward hard and mark about 35m out from goal, but missed the chance to snare his maiden Reserves goal.

At the other end, he marked in the middle of defensive 50 and speared a nice pass into the corridor, making for his lone rebound 50 of the day. Birt marked for a third time in the defensive corridor, but was caught holding the ball as he wheeled around off his mark.

Despite the unfortunate last touch and result, Birt capped off his game well by adding a couple of kicks to his tally. He finished with 11 disposals and six marks overall, playing a pretty classic wingman’s game with plenty to built upon.