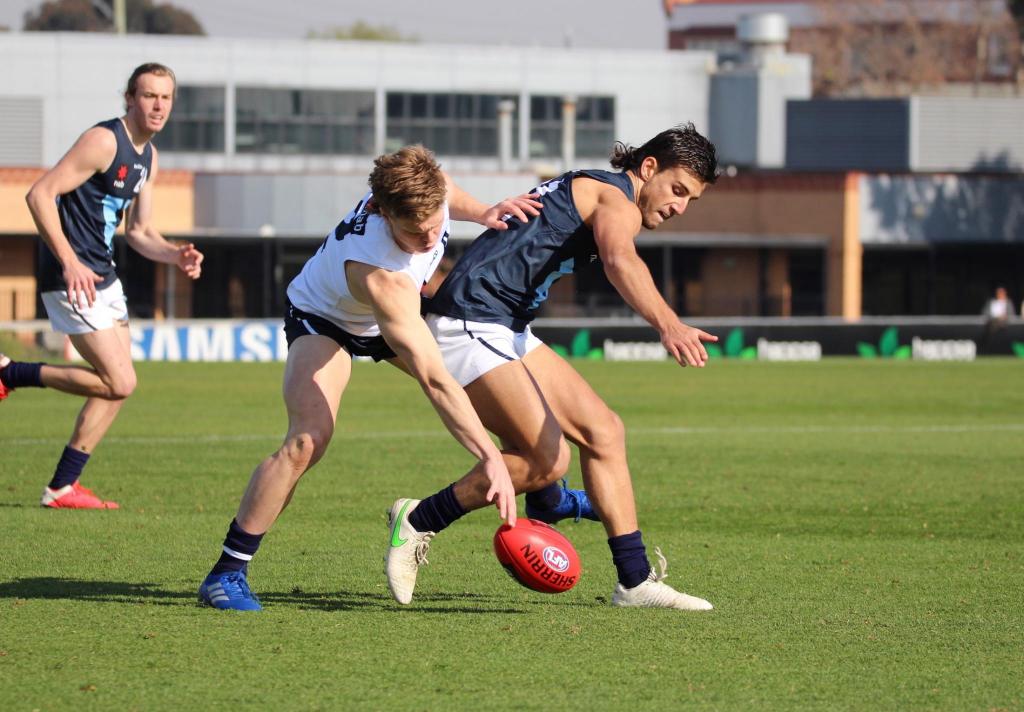 WITH the 2021 AFL Premiership home-and-away season done and dusted, the order of this year’s top 10 picks has been settled ahead of the latest draft intake. The top 10, and remaining order are subject to change with finals to be played and trade period the other hurdle, but there remains plenty of intrigue surrounding the pointy end regardless.

10 different teams currently hold a pick in said allotment, with Greater Western Sydney (GWS) the only club among them to hold another team’s first rounder at this stage. That, of course, is Collingwood’s first selection which currently sits at pick two, but will likely be used to match a bid on father-son prospect, Nick Daicos.

We take an early look at the current state of things, and how each club may use their top 10 picks should the order remain as is.

IN THE MIX: INDICATIVE TOP 10

What comes with the territory of picking up the club’s first-ever wooden spoon is North Melbourne’s first-ever number one draft pick, which always goes a long way to shaping the top 10. The Roos are in a great position to make life hard for a couple of clubs – namely Collingwood and Western Bulldogs – by bidding on their father-son prospects – namely Nick Daicos and Sam Darcy. Either bid would not be out of place, with both players genuine top three talents.

But with Daicos and Darcy essentially off limits, the North will likely turn to South Australian midfielder Jason Horne. The South Adelaide product has been playing League football for two seasons and is as readymade as they come, with very few weaknesses. He brings explosive power, aggression, and the ability to roll forward – traits which had him touted as this year’s top prospect before a ball had been bounced.

With Adelaide likely lurking for Horne, there has again been talk that North may look to trade down the order, much like there was last year. Smooth moving Sandringham Dragons midfielder Finn Callaghan could be another option for the Roos, as well as versatile tall Mac Andrew. The latter is tied to Melbourne’s Next Generation Academy (NGA), but is available to all clubs within the top 20. Horne seems to be the man, though.

GWS have come away brilliantly from last year’s trade which saw Collingwood pre-emptively part with its 2021 first rounder, which few would have expected to come as early as pick two. Should North Melbourne pass, the Giants could really sink the dagger into Collingwood by bidding on Daicos here, though it makes little difference either way as he will end up a Magpie within the top two.

It seems Horne will be snapped up by North, or whichever club looks to trade up to pick one, so GWS has a big decision to make. Callaghan is arguably the best available talent and would suit the Giants’ list profile with his 189cm frame and class on the ball. Greater Western Victoria (GWV) Rebels defender Josh Gibcus may be one who fits a need, though as former skipper Phil Davis nears the end. Andrew may be considered for similar reasons, with GWS well-stocked in midfield.

The Suns were in desperate need of a ruck come this year’s mid-season draft and with skipper Jarrod Witts on the road to recovery, could again boost said department. Andrew is the obvious choice in this range, but looms as more of a long-term option along with Ned Moyle. His versatility and pure upside may tempt the Suns too, given he can play in each key position post.

Should they look elsewhere, Callaghan would be the obvious choice if GWS does not snap him up first. They may also consider GWV Rebels key defender Gibcus, while Murray Bushrangers forward Josh Rachele has all the flair the Suns may look to harness. He would join former Bushranger Elijah Hollands in the Sunshine State should they make it happen.

A win in Round 23 saw the Crows jump up to 15th, landing them pick four and a good chance to get some value out of previous fallout in this year’s draft. The selection will likely be pushed back to sixth given the imminent pair of father-son bids, and Crows fans will be itching to pick up some more local talent after the success of Riley Thilthorpe‘s maiden season.

With Horne almost certainly to be off the board at this point, Adelaide could be a club which tries to deal with North Melbourne for pick one. If that’s not the case, fellow South Adelaide prospects Arlo Draper and Matthew Roberts may be in contention. Both have played at League level this year and bring quite different traits as midfielder-forwards; with Draper a classy and athletic type while Roberts is the hard-working accumulator.

Pick four may be a touch high for either player though, so the Crows could instead opt for more Victorian talent. Rachele would add some real dynamism to the Crows’ midfield-forward rotation, while Hobbs is a hard-nosed midfielder who looks absolutely ready to go. Paired with someone like Harry Schoenberg, and with Matthew Crouch potentially on the move, the latter could be Adelaide’s man.

Having spent so many years outside of this sort of conversation, Hawthorn is set to carry in its second consecutive top five selection to this year’s draft. Though it will slide back to pick seven, the Hawks have a great chance to snap up some value with their first pick should a top fiver drop out of that range. Hobbs seems a shrewd choice if available, though his hard edge and accumulative factor may be similar to what Hawthorn already has.

Tyler Sonsie has slid a touch in 2021 but would enter the Hawks’ minds having turned out for VFL affiliate Box Hill earlier in the year, notching 24 disposals and two goals. He is currently injured so may be going under the radar despite his undeniable class and skill in midfield. The Hawks have blooded some promising small forwards but could look to draft another in Rachele if available, while South Australian midfielder-forward Draper may also come into consideration.

While the spine is set, there are plenty of areas Carlton can look to bolster in this year’s draft. But with Adam Cerra reportedly seeking a move to Princes Park, the Blues may have to part ways with pick six. It could either be used as a centrepiece of the deal, or split to better suit Fremantle’s inevitably high price for the Victorian midfielder – especially with handy West Australian talent knocking about. Either way, it seems this pick will change hands.

Should the Blues head in with this selection though, they could prove a big winner nonetheless. Gibcus would be an ideal key defensive option to take over from Liam Jones in a few years, Hobbs could be the midfield bull they have been crying out for to support Patrick Cripps and protect Sam Walsh, while Rachele and Draper offer some much-needed x-factor in the front half. The reliability of Josh Ward may also appeal, as would the class of Sonsie or outside run of Campbell Chesser.

After achieving the ultimate success three times over across the last four years, Tigers fans will again be amongst those invested in what the top 10 has to offer come draft time. This promises to be their earliest pick since taking Nick Vlaustin at number nine in 2012 and while there has been a steady influx since, Richmond can now look towards pure list needs at the end of its dynasty.

Retirees Bachar Houli and David Astbury leave running and key position slots to fill in defence, with the likes of Josh Sinn and Gibcus perfect fits for either mould. We know the Tigers love a Northern Knights graduate, so Ward would be a good shout with Trent Cotchin winding down, though Hobbs would be hard to pass up if available. Neil Erasmus and Roberts are other reliable ball winning midfielders in contention, along with Sonsie who has a point of difference.

Despite missing out on finals this year, Fremantle is building nicely and has a terrific young list to build on. Dockers fans are buoyed by the prospect of picking up local key forwards like Jye Amiss, Jack Williams and Jacob van Rooyen, but both look like dropping about 10 picks outside of this range. With midfielder Adam Cerra lurking near the exit door, Subiaco pair Erasmus and Matthew Johnson could be a couple of taller mids in contention to bring that local flavour with pick eight. The Dockers are also said to be in need of some outside run, so Sinn and Sandringham Dragons teammate, Chesser would provide exactly that with their speed and attacking styles.

The Saints already have plenty of steel in midfield, pun intended, but may look to add some class with pick nine. Sonsie is a player with as much of that as anyone in the draft pool, and would perfectly fit a selection in this range. Draper is another who makes good decisions on the ball and handles it well under pressure, while Johnson’s poise may prove desirable should both already be taken. Sandringham prospects – we’re looking at you Chesser and Sinn – could also be in the picture for St Kilda given they already train at RSEA Park, and are terrific players in their own right.

Another club with an unusually early pick, this looms as West Coast’s highest selection since taking Andrew Gaff with pick four in 2010. The Eagles came away from the last two drafts with picks 52 and 57, and 49 and 58 respectively, so this year should prove a welcome change having just missed out on finals. Local picks will always be in favour, so Erasmus looks a shrewd choice if he’s still on the board. Johnson would be too, while Roberts is another reliable ball winner who may interest the Eagles. If running ability is on the agenda, Sinn could be the dashing half-back West Coast desires in this range.

REST OF ROUND ONE:

Stay tuned to Draft Central over the next couple of days, as we’ll be dropping an early top 10 phantom draft via the Final Siren podcast.