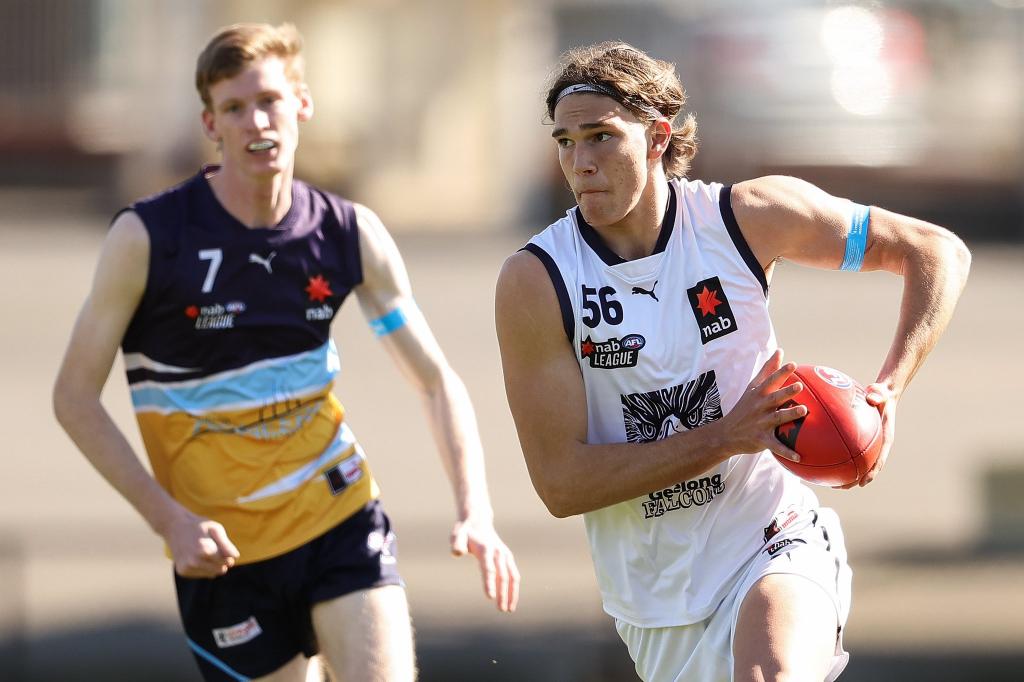 THE NAB League made its latest return on Sunday, with two games pitting four country regions agains each other. The Geelong Falcons and Gippsland Power picked up wins against higher-ranked adversaries, with rising prospects of all different age-groups impressive. We take a look at some of the top performers from each side in our opinion-based Scouting Notes.

Once again starting among Bendigo’s back six, Conforti constantly looked to generate some spark on the rebound and set his side on the front foot. Tasked with the kick-in duties, the top-ager also got to work by foot in general play with a sharp short-range game and crafty smarts in possession. He had no trouble finding the ball with a team-high 25 disposals in midfield and defence, but also got his hands dirty with 11 tackles as one of the Pioneers’ more consistent and prominent four-quarter performers.

Another of Bendigo’s nippy small midfielders, Hickman returned another promising outing with his evasive work around the contest. His spurts of speed and agility meant making space at stoppages was a key feature, with the top-ager able to get to the outer and generate a bit of forward momentum from the middle. One of his highlights was a four-bounce run from defence to the wing which sparked a coast-to-coast passage for Bendigo. He had a chance to hit the scoreboard in term four, but missed his shot from range on the run.

Get used to reading plenty about Reid for years to come, as the 2023-eligible prospect was again impressive for Bendigo. Having been utilised on a wing and more prominently up forward, Reid was given an extended run in midfield this time out to good effect. He showcased terrific speed coming away from congestion, cleanly bursting to the outside and pumping the ball forward by foot. His explosiveness also served well defensively, as Reid laid some ferocious tackles and dug in for repeat efforts around the ball. He couldn’t quite find the goals this time out from a couple of tough chances, but impacted with each act.

Hollard returned to the fold and made a splash in his usual small forward role, snaring a game-high three goals from 11 disposals and five scoring shots. The 178cm livewire made things happen when the ball entered his area, attacking it with intent and causing headaches for opposition defenders with his pressure. He could easily have finished with five goals, but finished his three nicely through differing methods; a crumb and snap, a steady drop punt on the run, and a punchy set shot. His scoreboard contribution helped Geelong really put the foot down.

With his level of performance thus far in the NAB League, it’s easy to forget that Clark is a bottom-ager. He registered 25 disposals, 10 marks and six inside 50s on the back of outstanding work-rate both at and away from the contest, providing great balance in midfield. In possession, Clark provided opportunities for his forwards and used the ball well on both sides, while also displaying clean overhead marking skills around the ground. He booted a goal in term four with a quick finish on his left foot, proving good reward for effort.

Offering speed and a hard edge in midfield, Whyte again showed flashes of style for the Falcons in a solid outing. The 18-year-old consistently attacked the ball with vigour and looked to get his legs pumping in possession, allowing for swift stoppage exits. He kicked his side inside 50 on seven occasions with that potent left foot and even managed a couple of shots on goal – albeit registering two behinds. His second attempt came after a terrific mark at full stretch, displaying notable courage with contact imminent.

While his numbers (nine disposals, four marks, one goal) may not jump off the page, Northam had some memorable moments on Sunday. The bottom-aged ruck spent a good amount of time forward with primary bigman Toby Conway returning, which allowed him to showcase his strong lead presentation and clean marking ability. With a knack for flying high, Northam almost pulled down a speccy in term three and booted a goal in the same period, beating his direct opponent one-out in the goalsquare. He also competed well at ground level, making for a well-rounded effort.

The most outstanding player across both NAB League games on Sunday, Knevitt continues to boost his stocks after yet another ominous outing in midfield. At 193cm, his contested work was again strong and the 18-year-old dominated in that sense, proving difficult to bring down. Arguably even more impressive was his sustained impact around the ground and up forward, with Knevitt’s work-rate and pack marking leading to a statline boasting 36 disposals and 10 marks. His handling was so clean with one-grab takes in every context, and one of his contested marks lead directly to a third term major. He’s a prospect on the rise.

Another player whose stats (16 disposals, three marks, two rebound 50s) may not tell the full story, Morrison produced some of the game’s most exciting passages from defence. His intercept marking ability was again observed on a couple of occasions, but it was the 18-year-old’s daring dash which really caught the eye. The 193cm bolter backed his pace to burn opponents through the corridor, before delivering spearing balls inside 50 to leading targets. In a flash, Geelong had gone coast-to-coast. While he had some quiet patches, Morrison’s best was really damaging and he seems to have gained a good deal of confidence this season.

The 204cm bigman returned to action for the Falcons and played his usual game through the ruck, also rotating forward. Conway positioned relatively well around the ground and while he only clunked two marks, competed for many more and had a few ‘almost moments’. In the ruck, he won 23 hit-outs and looked to assert his size by prizing clearances, though 12 of his 14 touches came by hand. It was a solid overall effort from the Vic Country representative.

The Under 17s Vic Country representative was a livewire around the ground throughout the contest, putting up an impressive game for a smaller forward. Konstanty kicked two goals; the first coming from a ground ball pick up in the forward 50, with a little burst away and a neat snap from the pocket, and the second coming when he hit arrived front and centre in the goalsquare with speed, snatching the ball and slamming it through. Not just kicking goals himself, Konstanty worked hard to create scoring opportunities for his side, with his competitiveness at ground level allowing him to win the ball and flick it out via hand inside 50. It was good to see Konstanty pushing up the ground and involving himself in the game even when Gippsland wasn’t getting it inside 50, with his pressure work resulting in stoppages and interrupting GWV’s momentum.

Despite being 183cm, Noblett was the most common target going inside 50 early on for Gippsland, getting himself three first half goals with an excellent display of work-rate inside 50. His most impressive goal came as he won the ball at ground level, quickly balanced himself and slotted it from right on the boundary. Noblett was often able to get separation from his direct opponent when making leads, but wasn’t always able to get free from GWV’s defensive structure.

Arguably the biggest driver going forward for Gippsland, D’Angelo had periods where it felt like he was the only player on the ground as he won clearances and kicked long. At times beating Ben Hobbs around stoppages, GWV had to adapt to try and negate D’Angelo’s clearance winning. He did well below his knees to win the majority of ground balls he was around, often mopping up after GWV had rushed a kick out of defence.

Humphrey really stepped up in the last quarter when the game was on the line, digging in and really powering through to win a couple of clearances in a row. His quick hands in close released his teammates well when he opted for that method, otherwise aiming for distance with his kicks from stoppages. He showed some good bursts of speed in close as well, to get separation from opponents quickly.

After being eased into the midfield in prior games, Butler enjoyed a lot more time on-ball against the Power and showed exactly why he was given the opportunity with an impressive display. Butler added a touch of class to the midfield, complimenting the in-and-under nature of his teammates with composure and ball use. This didn’t stop Butler from showing off some grunt of his own, at times winning contested ball, then showing off his impressive acceleration to power away from opponents. The balanced nature of his game meant he was always a chance to be involved in a piece of play – whether that was winning the ball himself, receiving the releasing handball, or working hard to be an option further afield. A theme across Butler’s game was his work ethic; willing to run both ways, making efforts, and then following up and going again if he wasn’t used or rewarded.

Hobbs was yet again a reliable and hard-at-it player for the Rebels, never conceding a contest without giving it everything he had. Hobbs’ work in-and-under was unsurprisingly elite, fighting hard for front position around stoppages and hunting the ball, running through opponents to win it before firing out a handball to a teammate on the outside, or kicking for distance from congestion. It was impressive to see Hobbs stand up in as many tackles as he did, holding his balance well as opponents tried all they could to pull him down, dishing off a handball to keep the play going.

Lining up in the forward half, Molan’s two-way running was a highlight of his game, pushing back to assist the backline when GWV was under siege, and getting involved as a link-up player or tackler. When GWV had momentum, Molan was used as a marking target in the forward 50 a few times as he worked hard to get separation on opponents and take marks uncontested. He used the ball well, placing his kicks in front of teammates to run onto, or handballing quickly as they ran past to keep play moving. Molan was one that didn’t neglect his defensive duties in the forward 50 either, rushing at opponents to pressure them into a rushed disposal or applying the tackle for a stoppage.

A mixed bag from the key defender saw a relatively quiet first half, as he stuck to his opponent well enough that Gippsland rarely looked to use that option. This lead to a change-up in his approach to the game, as Gibcus started to drift away from his opponent more and more. He impacted contests inside 50, utilising his speed and leap to spoil the ball, while pushing forward to intercept higher up the ground as the game went on. Perhaps most impressive from Gibcus was the high level of his disposal, hitting some difficult handballs in open play and utilising the distance of his kick a bit more than usual, but more often than not going for a shorter switch option around the defensive 50.

Lohmann was electric in the forward half for the Rebels, with his ball use and work below his knees giving GWV some good opportunities in attack. His athletic advantage over most opponents ultimately led to his two goals for the game. The first came after he had picked the ball up of a bounce, sold candy to get around one opponent and then side-stepped another, before snapping the ball from the pocket. The second came as GWV burst away with the ball from a stoppage and Lohmann broke away from his opponent, taking a mark on the lead, then playing on and kicking the goal.