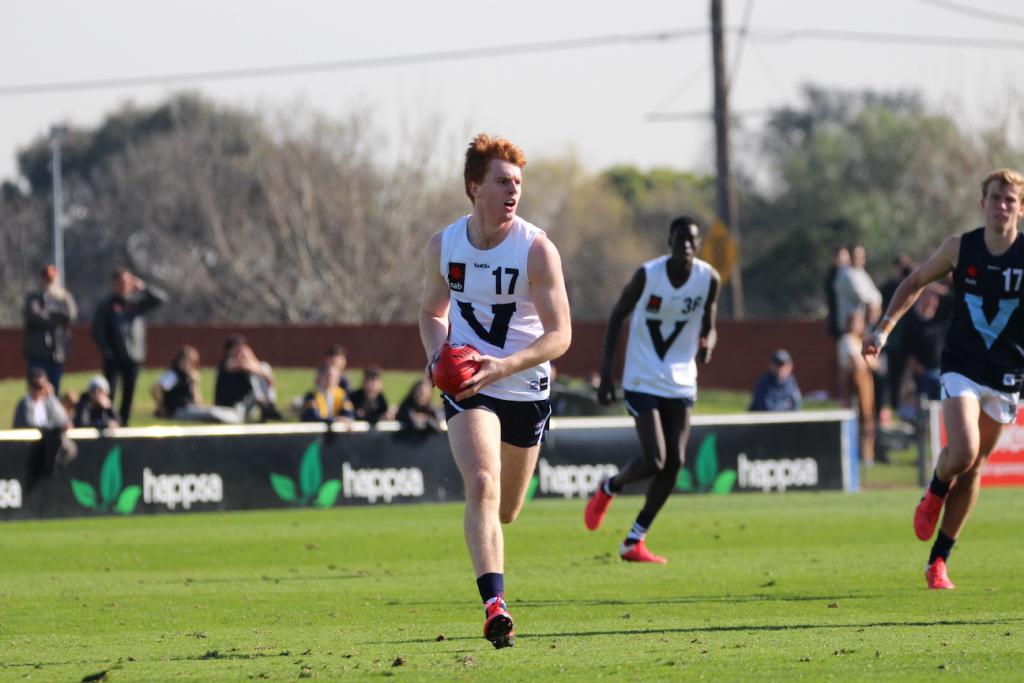 GREATER Western Victoria (GWV) Rebels’ Charlie Molan is a hard-working midfielder who showed off his incredible versatility against Gippsland Power rotating between midfield and forward, but also getting back to help the defence when required. His gut-running, high work rate and defensive pressure were all highlights of his game, as he amassed 15 disposals, but took six marks and laid six tackles, and could have had an even greater say on the result, booting 1.3 during the seven-point defeat at Morwell.

Molan is rated in the mid-draft region this year, with Charlie hoping to follow sister Sophie (Richmond AFLW) into the elite leagues of Australian rules football. He has been a mirror of consistency this season, picking up double-digit disposals in each of his 10 games, wit ha season-high 26 disposals against the Power in their last outing back in Round 8. Not a huge accumulator necessarily, Molan generally makes good decisions and his defensive game cannot be questioned.

Molan started the match forward and took a good uncontested mark 40m out about seven minutes into the contest. Despite being within range, he looked to spear a pass in but the Power defence was able to get a hand to it and force a stoppage. The tough utility’s work rate is what stands out on the field, and his determination to lay a fierce tackle on an opponent a couple of minutes later, forcing an out on the full kick and retaining possession in the forward half, exemplified what he has to offer. Molan took a strong contested grab 30m out on a tight angle and instead popped it up to key forward Josh Rentsch‘s advantage who marked and goaled from the top of the goalsquare. Later in the quarter, Molan was spotted running out of defence, showing quick hands to release a teammate on his outside, but then ran all the way to half-forward, not needing to pick up a possession, but laid a tackle on an opponent, allowing his teammate to score.

The second term was Molan’s most productive with his most disposals and a couple of marks, tackles and an inside 50 being busy between midfield and forward. He started through the middle and took a mark in the opening minute, kicking long to half-forward, before going over not long after and laying a great tackle to lock the ball up. He was a little overzealous with a marking attempt and caught his opponent in front high when going for a grab inside 50, but had a great second half of the quarter. At the 13-minute mark, Molan won the ball from the stoppage in the middle, burst away to have a flying shot on goal from 55m but it just missed to the right for one behind. Five minutes later, he produced an effective handball credit to a lightning flick to a teammate at half-back, then pushed all the way to half-forward to mark uncontested 45m out. He opted to hit a shot spear pass inside 50 to a leading teammate. His quarter was not done though, with a couple of touches in the final few minutes, winning a free kick for a tackle on the wing and giving off a quick handball for a teammate to kick forward, before winning a clearance from a throw in and giving off the handball to another teammate to go inside 50 as the siren sounded.

A quieter third term from Molan came after arguably his best effort of the day. Taking an uncontested mark inside 50 three and a half minutes into the quarter, his set shot from in front drifted to the left in the breeze, but it was what came next that caught the eye. He ran all the way from on the mark in front of goal to half-forward in order to lay a tackle and put pressure on his opponent rather than give him an easy run down the wing. Unfortunately Molan had a moment he would like back late in the term, where in the 19th minute he had a fumble inside 50, and could not cleanly take the ball after a couple of chances and was knocked over in the process. He had another touch in the last few minutes with a quick flick handball to a teammate in midfield.

His fourth term was solid overall but it all came in the last 15 minutes of the match, with an under pressure snap close to goal just missing for another behind. Five minutes later he found space inside 50 and took a great uncontested mark 25m from goal, making no mistake this time from the slight angle set shot. In the final minute of the quarter, he laid a great tackle to lock the ball up at half-forward, then just before the siren, Molan tried to get out of the stoppage but was immediately tackled.

Charlie Molan was named best-on for the GWV Rebels in the Rebels’ loss to Gippsland Power. Whilst other teammates found more of the ball, it is easy to see why Molan’s efforts were rewarded by the coach, with some unbelievable defensive runs that either mowed down opponents and forced turnovers, or implied pressure to rush the decision making process. His work rate, defensive attributes and versatility was all on show, and he had a really consistent performance across the board.