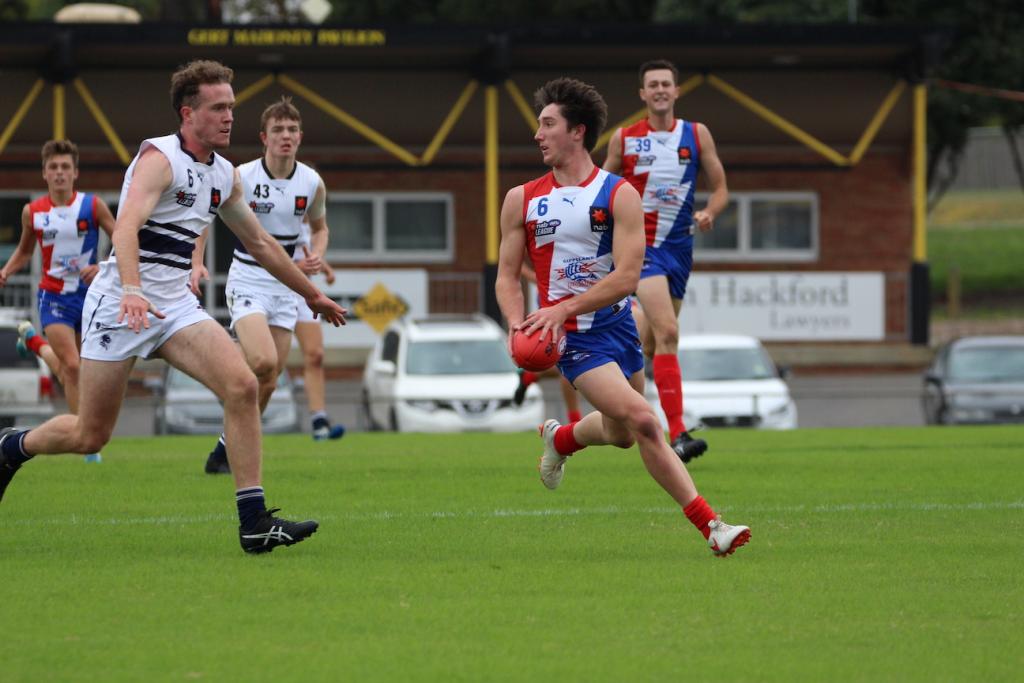 2021 has hardly been smooth sailing for most NAB League regions, but a regenerating Gippsland Power program has produced some real growth amid the chaos. After starting their current campaign with a 0-6 record, the Power have won three of their last four games, including the highly-fancied scalps of Oakleigh and Greater Western Victoria.

The reliability of a key top-age core and emergence of a “talent laden” Under 17 group has seen the group improve on a weekly basis. While not a win-loss kind of industry at its core, Power head coach Rhett McLennan says the recent results have served as “reward for effort.”

“It’s really good for our players to start getting some respect against the competition,” McLennan said. “It’s also really exciting for what it means for us going forward given that the majority of the improvement has come from our younger players on our list… hopefully we can carry the momentum and keep getting better each week.”

Having produced double-digit draftees over the last two intakes, Gippsland may be looking at another bumper crop in 2022, with a bunch of bottom-agers already beginning their NAB League initiation. McLennan says the region is “really lucky” to have such talent coming through, including a handful of Under 17 Vic Country representatives to choose from.

“What we’ve got on the whole from those boys has been some speed and class around the footy,” he said. “The second half of this season has given us an opportunity to give them an understanding of some of the roles they’ll be playing next year and getting them some of that really valuable game experience. It’s really a bit of a head start on next season so to speak for those boys.”

Not without challenges, the Power have also been served well by their 18 and 19th year leaders, who have shown great “resilience” to continually lift the standards of their side’s training and gameplay. A trio of top-agers have also gained VFL exposure and added confidence to the group, while McLennan is high on a particularly “consistent” performer.

“[The top-agers] have been excellent in regards to their resilience and their ability to keep the group together,” McLennan said. “As everybody knows it’s been really difficult to try and get continuity in the season, but to have leaders like Mitchell Moschetti, Luis D’Angelo, Max Walton, and Jai Serong consistently turning up and making the quality of our training sessions and our games competitive, and making Gippsland Power a real home for others has been invaluable to our entire list.”

“I’ve really liked the consistency of Moschetti this year. He’s probably been forgotten about after having a really solid nationals Under 16 carnival as a small defender. We’ve given him the extra responsibility as a midfielder this year and we just feel he’s getting better every week.

“Sunday was a perfect example, a game against Ben Hobbs and Sam Butler as two of the premier midfielders in the NAB League. Him and Luis D’Angelo probably ended up winning that battle on the weekend so to go and do that is showing his growth and his potential as a ball winner and someone who can really play roles. His ability to continue to learn and grow his game has been excellent so I think that he deserves an opportunity at the next level of footy if he can get it.

“[Jess McGrath and Chance Doultree] are extremely loyal to the program, they’ve loved their time at VFL and you can see the confidence they get from that experience when coming back and playing NAB League football. We’ve also had Box Hill put in a lot of time to Luis D’Angelo as well which has been excellent for him to come back with those learnings.

“Not only are we trying to impart knowledge on the players as coaches, but some of the boys with VFL experience are really trying to pay it forward to some of the younger players on the list and we’re starting to see that bear fruit now.”

While country regions have headed the NAB League’s latest return, Gippsland remains somewhat of an anomaly with a catchment of players based in the stretch from Officer to Longwarry classified as living within the metro ring and thus, unable to play. Among them are starting team talents.

“We really feel for those guys who are part of our team but can’t play,” McLennan said. “They’ve had two games now where they’ve been ineligible and it looks like a couple more, so whilst the majority of us are okay we really do feel for those boys.

“Chance Doultree unfortunately can’t play, as can’t Will Papley. Caleb van Oostveen who’s been fantastic as a pressure forward since he came in about Round 3 and 4. Paddy Cross, who really started to hit his straps in the last couple of games as a wingman, and Flynn Parker who’s been a tall swingman for us throughout the year. So those five boys have been difficult not to get, and then we’ve had a couple of Vic Country 17s that we’d like to have given a go that we’ve missed.”

The NAB League is set to continue on Saturday with another couple of all-country clashes, though this week will be Gippsland’s turn to sit out. McLennan hopes his side will return to action next week for another hit-out, providing even more exposure and opportunity for his players to prove their worth.