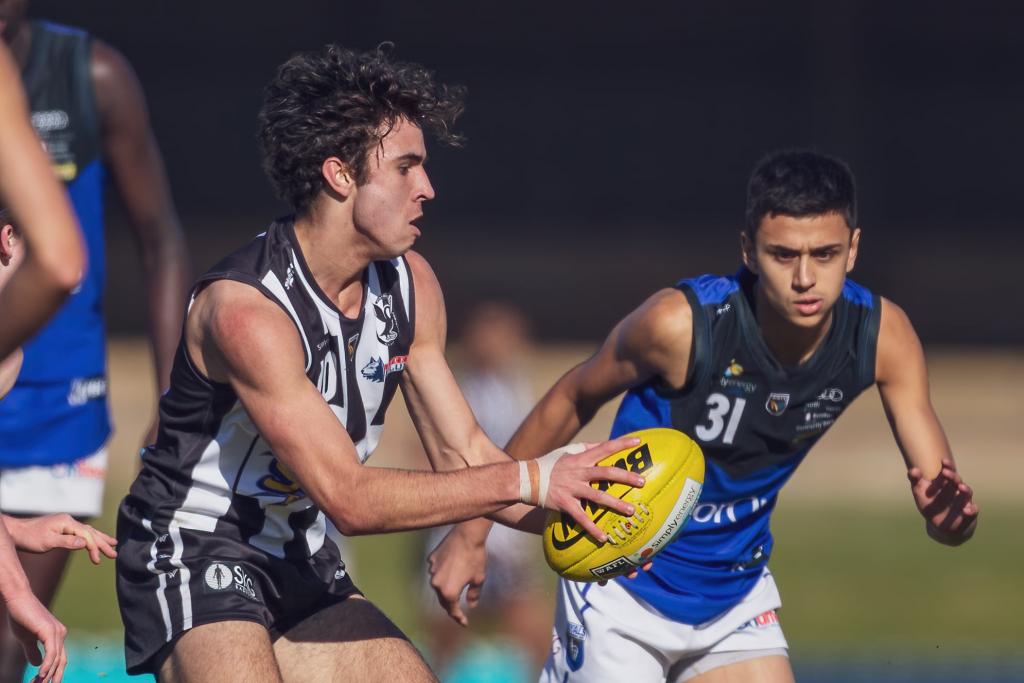 SWAN Districts stamped its authority as 2021’s leading WAFL Colts side, defeating the third-ranked East Perth by 34 points in a fiery affair on Saturday morning. The Swans broke away early in the third term and never looked back, as the Royals struggled to find any fluency with ball in hand and suffered their second loss in three outings, 11.9 (75) to 5.11 (41). We take a look at a few of the top performers from either side in our Scouting Notes, and go around the grounds with some of the other outstanding Colts performances out of Round 19.

The Swan Districts accumulator did exactly that on the weekend, racking up a game-high 35 disposals and five inside 50s as a mainstay in his side’s midfield. Chipper found plenty of the ball both at the contest and around the ground, disposing of it quickly with either sharp handballs or clearing kicks. The latter method proved a touch less effective, with many of Chipper’s 20 kicks dumped away under pressure, but he was much cleaner by hand and notched some repeat possessions that way.

Another Swans midfielder who had no trouble finding the ball, Hewett also leant on his work-rate to sneak forward and hit the scoreboard. He claimed possession in all parts of the ground en route to collecting 23 disposals, 11 marks and two goals, and could even have snared a couple more majors. His two six-pointers came via set shots after half time; with the first a 40m attempt after streaming forward to create an option inside 50, while the second was converted much closer to goal after sneaking in front of the forming pack to take an easy mark.

Setting the play alight with each touch, Metcalf showcased his mix of speed and skill for the Swans. He often worked up the ground and hurt East Perth on the way back with his run-and-carry, selling candy and hitting leading targets along the way. The poise to make good decisions and execute his kicks at speed was good to see, meaning his dancing feet would produce substance along with the obvious flair. Speaking of, Metcalf also snared two goals – both with clean takes and classy snaps on the move inside 50.

The bite-sized small midfielder was stationed out on the wing for Swan Districts and despite his 173cm standing, wasn’t afraid to get involved off the contest. Jones’ speed and creativity were his most outstanding features on the day, as he blitzed past opponents with confidence and kicked Swan Districts into attack. The bottom-ager is hard to miss in his helmet, but also caught the eye with a couple of terrific goals. His first came in the second quarter, finished with a left-foot snap after baulking and blind turning his bewildered opponents. The second came in term four, as he again used his pace on the move inside 50 and slotted home with aplomb. Jones showed a great mix of flair, toughness, and smarts while collecting 25 disposals, six marks, and five inside 50s.

The 2005-born prospect produced plenty of promising glimpses out on the opposite wing to his fellow Under 17 state squad member in Jones, boasting similar speed on the outer. He rode the bumps well and wasn’t afraid to back his pace when given the opportunity, providing a bit of spark for the Swans. Hardeman was instrumental in his side’s third term breakaway, booting two goals in quick succession to put a heap of pressure on East Perth. His first 10 minutes of said quarter were terrific, and perhaps a good sign what’s to come.

Swan Districts had contributors all around the ground, starting with a few notable performances in defence. Cian Ehlers took on one of the competition’s toughest assignments in manning Royals spearhead Jye Amiss and fared exceptionally well, keeping him to two goals while forcing him to work further afield. Bryce Watson (16 disposals) and Lawson Humphries (15) got to work on the rebound, while Noah Hannan proved busy with 24 touches in midfield. Up forward, Braydon Fawcett was a handful for defenders with his pace and pressure, laying a game-high nine tackles.

Even on a tough day at the office, Amiss added to his competition-leading goal tally with two majors from 10 disposals and six marks. Swans did their homework on him, but despite a combination of poor delivery and heavy opposition attention, the key forward had his moments. He was forced to work further afield and took a few strong contested marks, before finally finding the goals in term three. He finished nicely with a checkside as the ball broke deep, and later converted a 35m set shot on the end of some nice ball movement to cap off what would have been a frustrating outing for the prolific goalkicker.

Tunstill took a bit of time to get going but became one of East Perth’s more reliable ball winners at the source as the game wore on. The state Under 19 squad member finished with 16 disposals, four inside 50s and a goal, contributing some strong work around the ball. He stood up in a couple of spells during the first and second terms, with the latter patch ending in a terrific long goal after the half time siren which kept the Royals in with a fighting chance.

Another bottom-ager and one with a name you’ll unlikely forget any time soon, Busslinger was far and away the most assured East Perth defender afield. He was particularly prominent during the first half, positioning well to intercept and spare the Royals’ blushes on the last line of defence. He showcased good strength and instincts in contested situations, winning the ball back shrewdly before making good decisions with ball in hand. Busslinger’s poise and assuredness among a besieged backline were impressive, and he kept his side in the contest under early pressure.

East Perth may not have made great use of the ball in general, but had a few players who had little trouble finding it. Kalani Brooks stood up with a team-high 22 touches and six inside 50s, while wingman Oscar Armstrong was the other Royal to hit the 20-mark. Ruckman Sokaa Soka showed his athleticism en route to registering 16 disposals, five marks and 13 hit-outs, while Jayden Peak kicked a nice solo goal and Jordyn Baker popped in patches on the wing.

East Fremantle consolidated its top five standing with a comprehensive 166-point drubbing of Subiaco, taking toll with a side stacked with stars. The Sharks had all but won the game by half time with 12 goals to Subiaco’s two, before running out the game with 148 more disposals and 30 more inside 50s. Josh Browne returned with a casual 35 disposals, seven marks and 1.2 for the victors, supported well by Taj Woewodin (26 disposals, two goals), while Jack Williams (six marks, three goals) and Josh Cripps (23 disposals, four goals) took toll up forward. Jacob Evitt was the Lions’ standout, notching two majors from 16 touches and six marks.

Claremont also registered a dominant victory in the three-game round, defeating the winless Perth by 95 points to move two games clear in second spot. The Tigers dominated at one end of the ground, booting 11 of their 16 goals in the first and third terms while keeping the Demons scoreless. Jacob van Rooyen‘s goalkicking form continued with 5.3 from 22 disposals and seven marks, while the likes of Jacquin Ciminata (26 disposals, 18 tackles, one goal), Kendyll Blurton (26 disposals, nine inside 50s), and Tyreice Brown (23 disposals, 3.2) also made their mark.

There were a bunch of Under 17 and 19 state squad members who returned to PSA action, while others featured up the grades. Finn Gorringe notched 12 disposals and six marks in the Sharks’ 44-point League win over Subiaco, while Jack Avery had 16 touches and four marks for Perth as the Demons went down to Claremont by eight points. Big-bodied East Perth midfielder Kade Dittmar made his senior debut for the Royals but was quiet in a 41-point loss to Swan Districts. In the Reserves, Matthew Johnson fared well with 25 disposals and 10 marks for Subiaco alongside a few of his 2020 Colts premiership teammates.