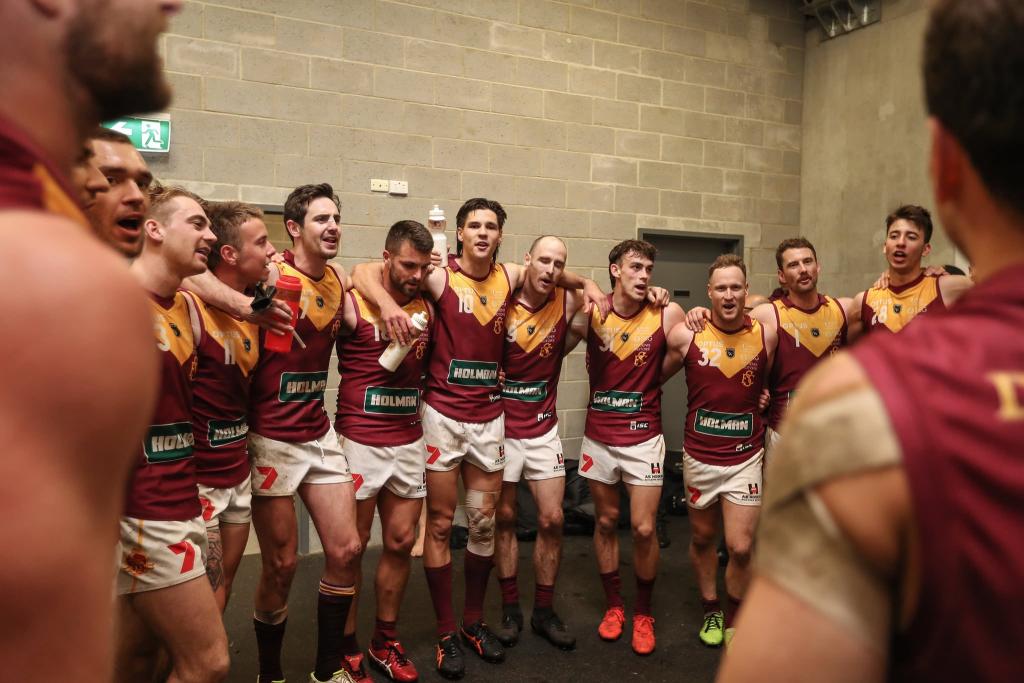 IT was another week with no games in the VFL or QAFL as COVID-19 restrictions continue to stop footy being played. Nevertheless, we were treated to big wins, small wins, upset wins and plenty of goals across the SANFL, TSL and WAFL action over the weekend. We recap everything that happened in this week’s state league wrap.

The SANFL was full of big winners and big losers over the weekend, with all games decided by four or more goals, including three 50-plus point defeats.

The closest game of the round was Sturt’s 24-point win over Port Adelaide, but the Double Blues had dominated the match from early on leading by six goals at half-time. Anzac Lochowiak kicked four goals for the game, while James Battersby (27 disposals) and Casey Voss (24 disposals) found the footy. Port’s AFL listed players Jarrod Lienert (33 disposals, 1 goal) and Sam Powell-Pepper (30 disposals, 10 clearances, eight tackles) will be looking for a recall into the senior team with finals approaching, alongside Steven Motlop (20 disposals) and Boyd Woodcock (2 goals). The win keeps Sturt in the finals hunt with only one win separating them and a place in the top five.

Norwood 9.15 (69) got the job done over West Adelaide 6.4 (40) in a game that had some outrageous tackle numbers. The Redlegs had 113 tackles to the Bloods’ 109. Jacob Kennerley (17 tackles) and Patrick Fairlie (14 tackles) led the way for their teams with seven players recording 10 or more for the match. Declan Hamilton (31 disposals) found plenty of the footy for the Redlegs and Thomas Murphy (26 disposals) had the most for the Bloods.

In other games, Glenelg continued its unbeaten run with a 54-point win over Central Districts. There were goals galore for Liam McBean who booted seven majors, and Marlon Motlop who snagged four of his own. Daniel Menzel (four) and Tyson Stengle (three) kicked seven between them for Woodville-West Torrens, while Kai Pudney (34 disposals) found plenty of it in their 17.13 (115) to 8.2 (50) win over Adelaide. James Rowe amassed 35 disposals for the Crows and put his hand up for selection for the final AFL round next week.

Clarence climbed into third spot after a stunning two-point victory over Launceston. Ex-Lion and Bomber Josh Green and Tasmanian Devils young gun Baker Smith both slotted three goals in the victory which was a nail biter right up to the final siren. Clarence led at every break, with the Blues always just behind. Cody Thorp booted five goals for the match, but the Blues will be ruing their inaccurate final term, kicking 2.5, which saw them succumb to just their second loss of the season.

Elsewhere, another young Devil put on a show, with Will Splann kicking five majors for North Hobart in their second win of the year, defeating Glenorchy on their home turf. While the Demons can’t move from last place, the loss for the Magpies all but ensures they will finish in second last position with just one home and away game to come.

Meanwhile, a stunning nine goals to one final term from North Launceston saw them come away with a 38-point win over the Tigers. After a big start to the second half from the Tigers, where they overturned a 20-point deficit to lead by 10 points at three quarter time, the Northern Bombers put their foot down and took control of the match in the final quarter. Bradley Cox-Goodyer was one of 10 goal kickers for the Northern Bombers, and led with three goals, while Marcus Gardner also kicked three for the Tigers.

Round 19 action consisted of four games, three in which were big margins, while one game saw second-last Perth give third-placed Claremont a real run for their money, with the Tigers just holding off a Demons last quarter comeback. Jye Bolton booted three goals for the match including the sealer late in the fourth quarter. Teammate Timm House also kicked three goals, while Bailey Rogers (31 disposals) and Ben Edwards (30 disposals) racked up plenty of the ball. For Perth, Jack Richardson, Kristian Cary, and Brent Edmonds each kicked two majors, with Austin Davis collecting the most touches (26) and Cary also laying a match high 12 tackles.

East Fremantle pulled off a stunning victory against league leaders Subiaco, winning the contest by 44 points. After starting the game as the better side Subiaco led by 14 points at the main break, before the Sharks stunned everyone in the third term putting up seven goals to none. They didn’t stop the onslaught winning the final quarter five goals to three. Jonathan Marsh played a starring role kicking three goals and having 27 touches, while Hugh Dixon also added three goals. Subiaco’s Lachlan Delahunty led all comers collecting 32 disposals for the match.

In other results, West Perth dominated the West Coast, led by Tyson Keitel kicking seven goals and Shane Nelson (41 disposals), Aaron Black (39 disposals) and Tristan Hobley (30 disposals) winning the footy at will. Brayden Ainswroth (30 disposals), Hamish Brayshaw (28 disposals) and Jarrod Brander (27 disposals) all played well for the Eagles, but they were outclassed, with the Falcons winning 16.10 (106) to 5.5 (35). The other match saw Swan Districts come out 41-point winners over East Perth with Aidan Clarke slotting four goals for the Swans and Royals players Rohan Kerr and Angus Scott collecting the most touches on the ground with 32 each.