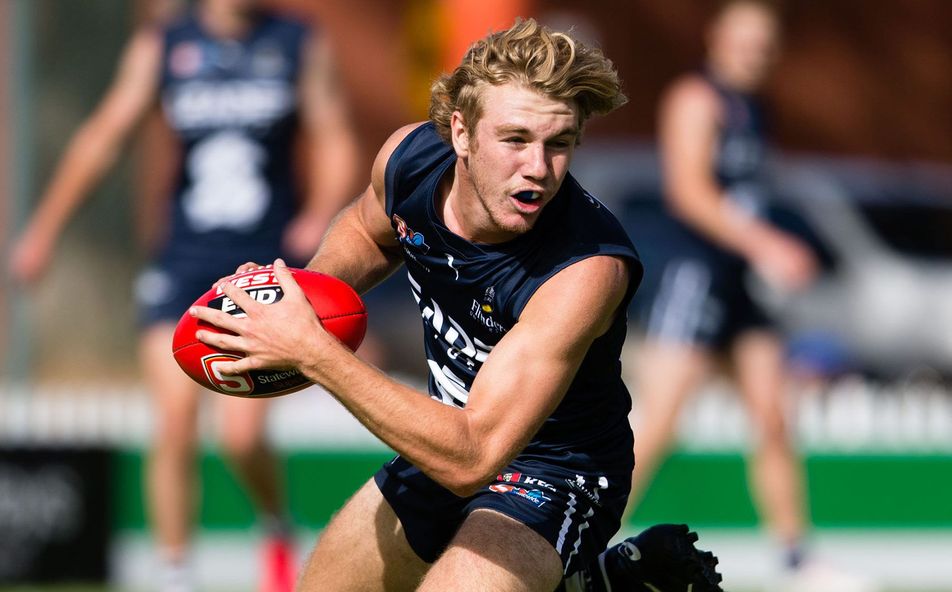 THE MAIN event for draft watchers around the nation was at Flinders University Stadium on Saturday, as a trio of South Australia’s top prospects lined up at SANFL League level. Remarkably, all three turned out for the same side and are firming as top 15 talents, with Jason Horne-Francis, Matthew Roberts, and Arlo Draper the players in question.

While top pick fancy, Horne-Francis has long established his place in the League line-up, Roberts made just his third senior appearance as Draper earned his debut on the weekend. The latter two were promoted from the Reserves grade having returned from respective ankle injuries, bringing South’s total of under 23 players up to 11 in its Round 17 loss to North Adelaide.

In a new-look series, we put all three first round prospects under the microscope for the maiden First Round Watch edition, outlining each players’ vitals and more importantly, their performances.

Debuting at League level in just his second game back from an ankle injury, Draper looked arguably the most polished of these three young Panthers. He rotated into the game off the bench and was almost exclusively used as a forward, sighted as deep as the goalmouth and as far up the field as half-back.

Having improved his running capacity during preseason, Draper showcased his ability to cover ground as a high half-forward while also contributing some handy defensive acts. He laid five tackles for the day and did some chasing, including one early effort through the corridor to hunt down a bursting Billy Hartung.

It was Draper’s class on the ball which impressed most though, as he displayed clean handling and a cool head under pressure. With some strong presentation on the lead, the 18-year-old secured five marks and was also able to take the ball with one-grab in general play. In the latter instances, Draper’s attack on the ball and absorption of contact were really positive.

His use of the ball was also quite sound, not afraid to look for inboard options but mostly kicking short to a target down the line. He enjoyed a nice one-two passage through the corridor in term four and also hit a lovely pass to the leading Liam Fitt inside 50.

Draper capped his game with a goal in the third quarter, snapping up an errant North Adelaide kick on the fly and quickly getting boot to ball for a lovely checkside finish under pressure. All class, and a terrific debut performance for a player climbing into top 10 contention.

The most highly-touted talent of this trio and potentially the entire draft pool, Horne-Francis continues to show he is more than up to the rigours of senior football. He again rotated through the midfield and forwardline, impacting in spurts around the ball and providing plenty of physicality with his bull-like charges in congestion.

His intent and pressure at the contest were real features of his game, as he dug in for repeat ball winning and tackling efforts when stationed around the stoppages. While South Adelaide was beaten at the centre bounces, Horne-Francis often got first hands on the ball around the ground and even received some uncontested footy.

The 18-year-old’s booming boot was also on show with some launching kicks away from congestion, but his short-range game sometimes invited a touch of pressure for his teammates.

Having gained a wealth of senior experience over the last two seasons, Horne-Francis showed a high level of confidence in his play, even if his exploits didn’t always come off. He backed his pace to burn past opponents, fending off 100kg Roosters ruck Mitch Harvey in the final term after being caught cold with a similar play in the second.

He looks as comfortable at the level as any youngster ever has, copping the hard knocks and also dishing them out with real intent and an unteachable hunger for the ball. His explosiveness and raw power can be massively damaging with a touch of polish. To cap his game, Horne-Francis also spent time on the wing and in defence during term four.

Roberts racked up the most ball of the trio in question here, finishing with very respectable numbers of 20 disposals and seven inside 50s. He was stationed out on the wing for three quarters before being given a run on the inside, providing an opportunity to display his balance as a midfielder.

The red-haired runner would have gained some valuable learnings given former Hawk and Roo Billy Hartung lined up as one of North’s wingman, enjoying a great outing of his own. Roberts is similarly apt in terms of hard running, albeit not as pacey, spreading hard both ways and positioning well to receive on the fringe of the contest.

There were many instances where Roberts would nab the exit ball from his teammates and bomb long by foot, sending South Adelaide forward quickly. He also worked back into the defensive arc and mopped up, supporting his defenders at ground level when necessary.

The 18-year-old looked much more polished when he took his time in possession and kicked short, but often blazed away with a kick as soon as he got hands on the ball. There were a few scrubbers and ineffective balls as a result, even if Roberts gained decent penetration.

He was much cleaner by hand and that factor allowed him to have as much of the ball as he did, working well off the deck and proving reliable as a handball option. That trait boded well for his centre bounce attendances in term four, where big-bodied former Port player Andrew Moore manned him up. Roberts ultimately had no trouble finding the ball, returning a solid output in his second game back from an ankle injury.