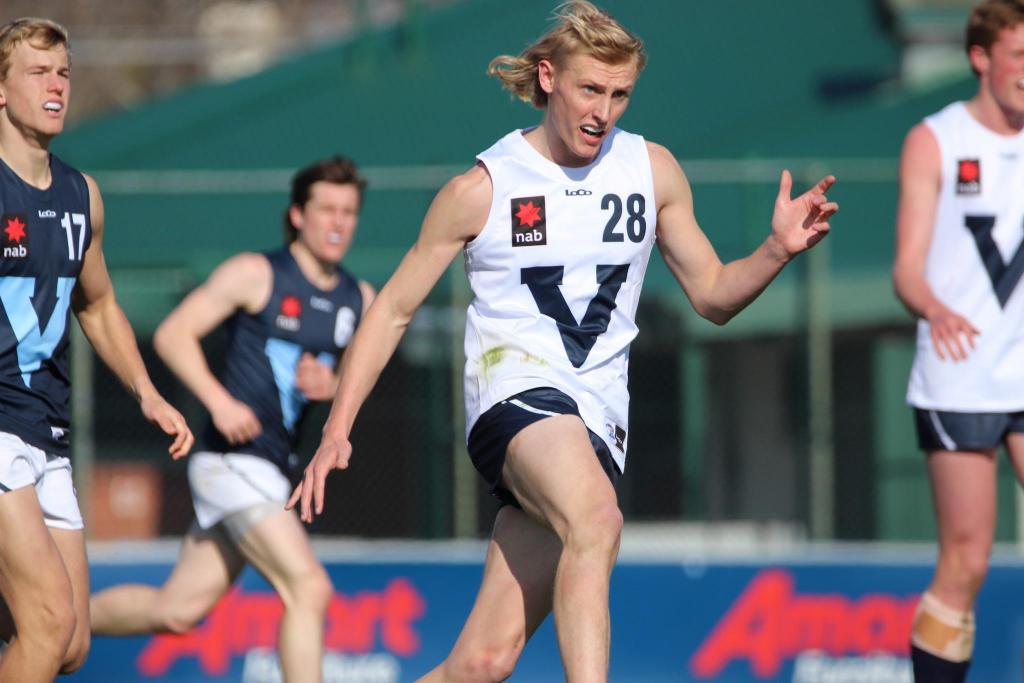 GEELONG Falcons Mitch Knevitt was touted as a potential draft bolter at the start of the 2021 NAB League Boys season, talked up as one to watch from the Falcons’ coaching group prior to hitting the ground for competitive matches. One who has got better with each game, Knevitt had a real breakout performance – though his prior ones had been ultra-impressive and eye-catching in their own right – putting up a stunning 36 disposals, 10 marks, eight inside 50s and booting a goal during the Falcons’ big win over Bendigo Pioneers. He has collected more than 20 disposals in seven of his nine games this season, with his past three being 27, 28 and 36 disposals.

Knevitt started the game in absolute ripping form, picking up double-digit disposals in the quarter, having multiple marks – including a couple of huge contested ones, and was lively in all thirds of the ground. He had an early inside 50 to set up a scoring opportunity, and then took a great contested grab at half-back and then opting to kick long down the wing. Balancing his disposals between long kicks and flick handballs in close, Knevitt looked to find space on the outside, but also win plenty of the ball in close. Whilst his kicking was not always direct, his clean hands were a standout both in the air and in congestion, as was his ability to stand up in tackles. He did this on a number of occasions and won a couple of quick touches late in the quarter and was able to clear it from half-back to the middle.

Knevitt started the second quarter like he finished the first with a quick kick out of the stoppage going to the wing, and then winning a couple of handballs in close to bring up 15 touches in under 30 minutes of action. His pressure around the ball was great, even if his tackles were not always sticking. His intent was fierce, and even when faced with a tackle, he seemed to always get the hands free thanks to his extra height and flicked the ball behind him to an open teammates. Midway through the quarter, Knevitt charged out of the forward line and won it off the bounce, turning and snapping but it just missed his teammate and bounced out of bounds. He offered up an option at half-back in the last 90 seconds, but his teammates’ kick to him went too wide and out on the full. At half-time, Knevitt was clearly the most prolific ball-winner.

The third term started a bit slowly for Knevitt in terms of pure numbers, with a smothered kick at the top of 50 his only real touch in the first third of the quarter. He still pressured opponents, but it was the last 12 minutes where he started racking it up again and having an impact, showing quick hands to set up a teammate towards goal, and staying forward for a prolonged period. He took a great mark on the lead showing off his athletic traits 16 minutes into the quarter, and never looked like missing his set shot from straight in front. That goal was almost followed by a second one thanks to a perfect midfield play roving the tap from Toby Conway, charging forward and launching from outside 50, but was touched on the way through. He picked up another handball in the last 30 seconds at half-back to allow a teammate to kick down the ground.

The fourth term finished off his day with a couple of early pressure acts in the middle at the first bounce. A huge contested mark inside defensive 50 after only 35 seconds – and under pressure from an opponent – saw him able to relieve the damage and kick laterally to a teammate. It was a case of rinse and repeat in the last quarter for Knevitt who won a few touches in close and quickly flicked the ball over his head to allow his teammates to go, whilst also offering himself as an option down the ground. He took another strong contested grab on the wing, but his kick was turned over when he looked to go inside. An eye-catching play came in the last few minutes when he read a handball perfectly, intercepted it cleanly and dished it off to a teammate to run inside 50. Almost taking a mark in the final seconds of the game, Knevitt could not quite hold it, but had been strong otherwise in the air.

Mitch Knevitt has been building throughout the year be it for the Geelong Falcons or Vic Country in their recent clashes with Vic Metro. On the weekend, Knevitt produced what was ultimately his best performance, racking up a whopping 36 disposals, 10 marks and eight inside 50s, which topped the game in each of those stats. Most notably, his contested marking ability and athleticism for a tall is what makes him such a unique prospect, and one who will with time and more development become well-rounded and iron out some of his deficiencies.