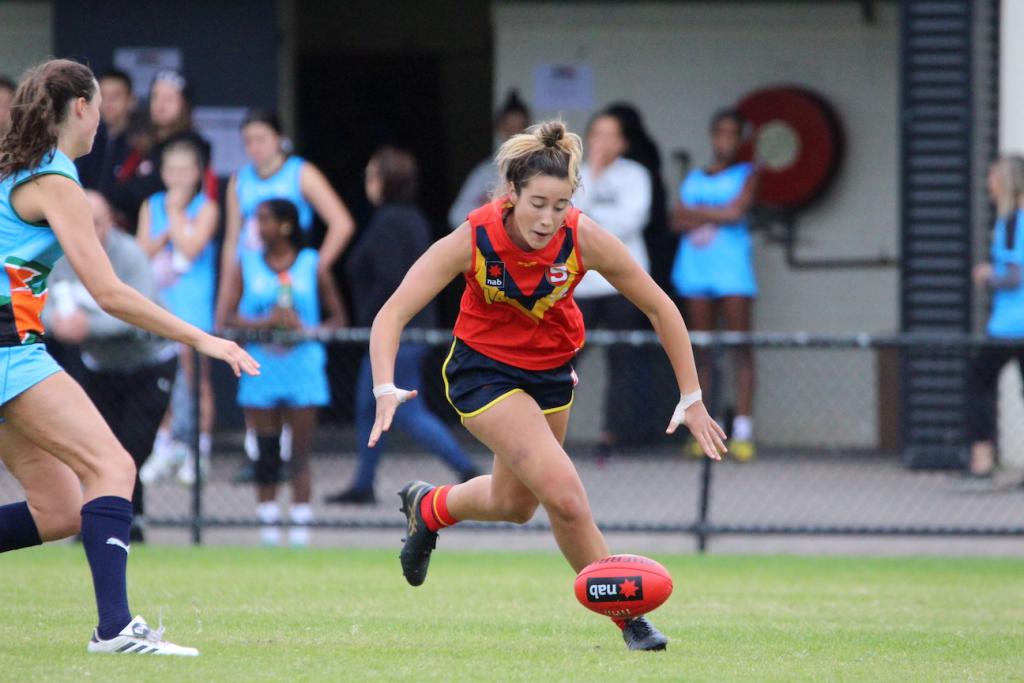 IN a new series looking towards the 2022 AFL Women’s Draft, we take a look at some teams that have outstanding prospects who showed plenty of promise in their bottom-age years to suggest the team might have plenty of potential for the next season. We continue with North Adelaide, who won the SANFL Women’s premiership in 2020, and have one of the top AFLW Draft prospect for 2022, as well as another tall talent already capped at Under 19s state level.

One of the players to watch throughout 2022, Ewings has been a sensational talent in the SANFL Women’s for a couple of years now, though an ankle injury on the eve of the Under 19 Championships this year ruled her out of the competition. Winning the Breakthough Player of the Year award in 2020, Ewings is an inside midfielder who shared the responsibilities with the likes of Anne Hatchard in the Roosters’ premiership side and never looked out of place at senior level. A full season injury-free, and Ewings will be a name to remember, with the Crows Academy member among the best talents going around and capable of potentially being the best all things going right.

In a state side that lacked height, Borg provided not only that, but versatility as well, with the 177cm talent able to play in multiple roles across the ground. For the Roosters, Borg traditionally will set up in defence, but she is capable of rolling through the ruck and providing some assistance. In what was a hard side to break into in 2020, Borg forced her way in as a bottom-ager in 2021, and averaged the 8.1 disposals, 1.2 marks and 1.3 rebound 50s, often playing a lockdown role and providing more of a nullifying presence. Her efforts earned her a place in the 2021 SANFL Women’s Team of the Year.

Yet to be capped at SANFL Women’s senior level, Cox is an exciting developing talent in the Crows Academy, standing at 177cm. She played in the AFL Women’s Under 17 Championships for South Australia when the state played two games showcasing their best talents. It was her first game in particular that caught the eye, picking up 14 disposals, three marks, four hitouts, five rebound 50s and even kicking a goal as her Blue side got up by 23 points. In the second game, Cox kicked another goal playing in the forward half and having the five touches and five hitouts. One to watch for a senior debut in 2022.

One of the more versatile players going around, Case is a neat user of the ball and is capable of taking grass when moving on the outside. She averaged the 10.3 disposals and 4.3 tackles at the AFL Women’s Under 19 Championships, doing her best work off half-back or along the wing, which is where she can do the damage for North Adelaide in the SANFL Women’s competition.

North Adelaide had three additional players across three different draft years also capped at AFL Women’s Under 17s level. Along with Cox, Gabby Rodda was the other 2004-born talent, and she showed good signs particularly in the second game, booting a goal from 11 disposals, and having two clearances. Elaine Grigg is a 2023 AFLW Draft talent to get excited about, with the speedster averaging 24.5 disposals, 8.5 tackles, 4.5 clearances and 5.5 inside 50s at the championships to suggest she could step up to Under 19s level as a bottom-ager next year. Still a raw talent, she has played six SANFL Women’s games already, averaging 6.5 disposals and 5.3 tackles, not afraid to take on bigger opponents. The third prospect from the Under 17s Championships is a remarkable 2007-born talent in Maggie Clark, with the 14-year-old not eligible until the 2025 AFLW Draft, but gained great experience amongst the older players running around.