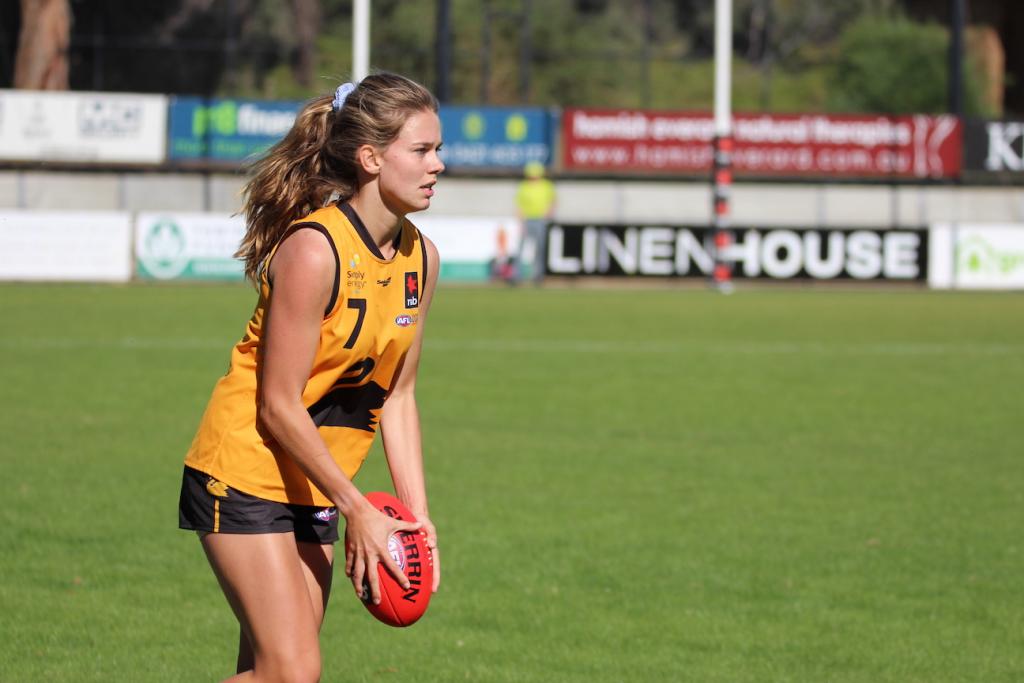 IN a new series looking towards the 2022 AFL Women’s Draft, we take a look at some teams that have outstanding prospects who showed plenty of promise in their bottom-age years to suggest the team might have plenty of potential for the next season. We continue with Peel Thunder, who have been a hotbed of talent the last few years, and remain one of the most exciting West Australian Football League (WAFL) Women’s sides.

Set to be the most talked about prospect coming into 2022, with the talented forward already picking up her state and overall carnival Most Valuable Player (MVP) awards at the AFL Women’s Under 19 Championships. Already a dual premiership player – winning the first grand final off her own boot with crucial goals and then becoming such a crucial player in the Thunder side she was tagged most weeks – Roberts is a readymade talent who can impressive in many different ways. Strong overhead, athletic and just as fierce on the ground, Roberts has a terrific balance of offensive and defensive traits. Having no issues finding the ball – picking up 31 disposals in one game at the championships playing as a high half-forward – Roberts will remain an exciting talent to watch, week-in, week-out.

Playing all three games for Western Australia at the AFL Women’s Under 19 Championships, Wright is a raw, but exciting prospect. Able to play predominantly as a high half-forward who can roll into the midfield and provide some hardness, she is a player who likes to take on the opposition and put the ball inside 50 to dangerous places. She averaged 11.3 disposals and 4.0 inside 50s at her bottom-age championships, booting a goal and catching the eye with some impressive plays. Whilst still building areas of her game to become a more complete player, Wright is one who has some exciting athletic traits and could be even more damaging when she is able to lift her accumulation. Her work rate up and down the ground is great, and she is always looking to present as an option.

Might not have made the Under 19s squad, but the consistent midfielder has been plying her trade in the WAFLW and gaining great state league experience. A readymade body who is not afraid to cop contact, Fenton was a class above with her ball-winning skills and impact on the game at the Under 17s Championships. Often winning it in close, Fenton had 24 and 22 disposals in the two State Academy games, and more importantly showed she could roll back into defence – picking up three rebound 50s in one game – and push forward with five inside 50s in the other. Capable of playing inside or out, Fenton is no stranger to winning the pill and had 18 disposals, three marks and three inside 50s as the receiver going forward.

One of a number of West Australians in contention, Mann was unlucky to miss out and with another big preseason behind her, could be one to watch in 2022. Capable of playing anywhere on the field, Mann seemed to settle into defence, strong one-on-one and able to be accountable, whilst providing some offensive drive. She is a good size at 171cm and can match most players for strength, able to play on talls or smalls which makes her a versatile defender.

Two other players made the Under 19s West Australian squad, with Emily Gunton being another highly-talented prospect and good size at 171cm. Averaging the 4.7 disposals and 3.7 tackles at the championships, the bottom-ager showed some good promising signs, mostly playing Rogers Cup this season (12 games). Naomi Wilson was named in the squad, but the ruck unfortunately did not end up playing a game, only playing three Rogers Cup games early in the season. From the Under 17s Championships cohort, there are four more players still two drafts away from being picked up, and a further two remarkably 2006-born talents. Jordain Thompson averaged the most at the carnival with 12 disposals in both games, while Cierra O’Donnell, Jade Mead and Tessa Liddington also played as 2023 AFLW Draft prospects. Jorja Haines is a 2006-born talent but had a couple of impressive outing, averaging 16.5 disposals and 3.5 clearances across the two matches, while Holly Britton is another name to keep an eye out for in the future.