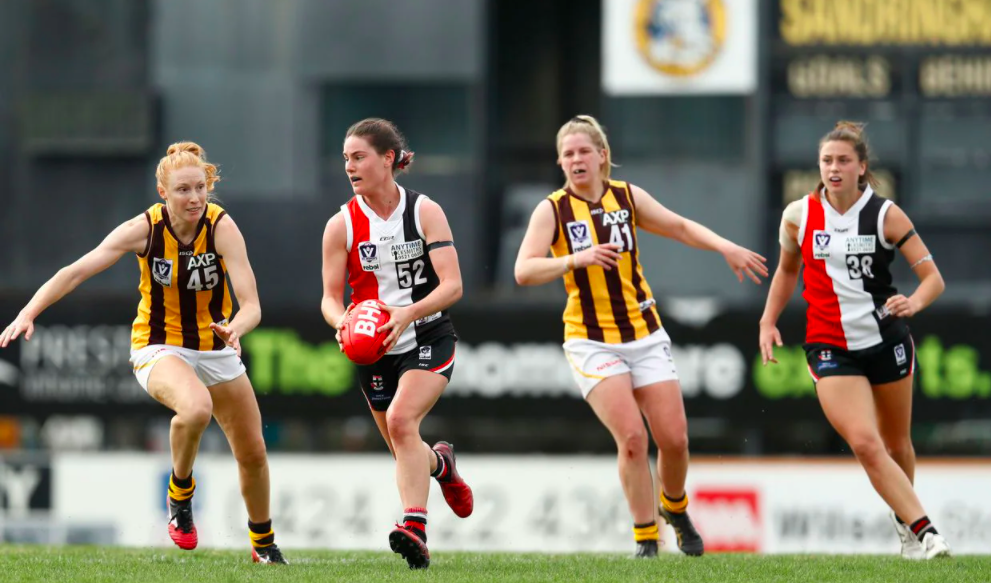 IN summarising the 2021 Victorian Football League Women’s (VFLW) season, Draft Central will run through a team-by-team review of how each of the sides fared, and who some of the standout VFLW-listed performers throughout the clubs were. The next team in the firing line is Southern Saints.

Season in a Sentence: “2021 offered a bit of everything for the Southern Saints, who produced both three-game winning and losing runs in what was ultimately a satisfyingly even 7-7 season.”

The 26-year-old key forward returned sensational numbers as the Saints’ focal point in attack, averaging 16.8 disposals, 4.4 marks, 7.2 hit-outs and booting 19 goals in her 16 games. Bohanna was held goalless just four times in 2021, and her efforts culminated in richly deserved best and fairest honours.

From tall to small, De Angelis was another important part of the Saints’ forwardline. The speedy 20-year-old snared 11 goals in her 15 appearances this season, booting two on four seperate occasions to showcase her constant attacking threat. She ended up third in her side’s best and fairest count.

One of three co-captains who means plenty to the Southern Saints squad, Jolliffe lead from the front in her 15 outings this season. She averaged 14.3 disposals and 5.7 tackles and 2.8 clearances as a tough member of the midfield group, capping her season by taking out the Saints’ coaches award.

Another of the Saints’ prime midfield movers, Stuart hardly missed a beat in her 15-game campaign with strong averages of 18.5 disposals, 5.9 tackles, and 3.8 clearances. The 27-year-old was named among her side’s best players on nine occasions in 2021, enough to be the runner-up best and fairest.

So consistent was Alice Burke‘s form at VFLW level, she finished fourth in the best and fairest count with averages of 21 disposals and 6.5 tackles in 11 games. Fellow youngster Renee Saulitis also fared well with an extended run, while Jess Matin was another who earned a senior berth on the back of strong form. The likes of Hannah Priest, Tyanna Smith and Molly McDonald impacted in their short stints, and Nadia Von Bertouch played nine games before being delisted and suiting up for Hawthorn.

The Saints had a nice spread of contributors from their VFLW-listed group. Alexandra Hynes emerged as a promising ruck option throughout the season, while Lucy Burke held down her post in defence, and Rebecca Neaves earned plaudits alongside Madison Capsalis and Melanie Bertuna. Co-captain Frankie Hocking was another valuable member of the squad across her six appearances, as Kayla Ripari rounded out a trio of players to feature in all 16 games.