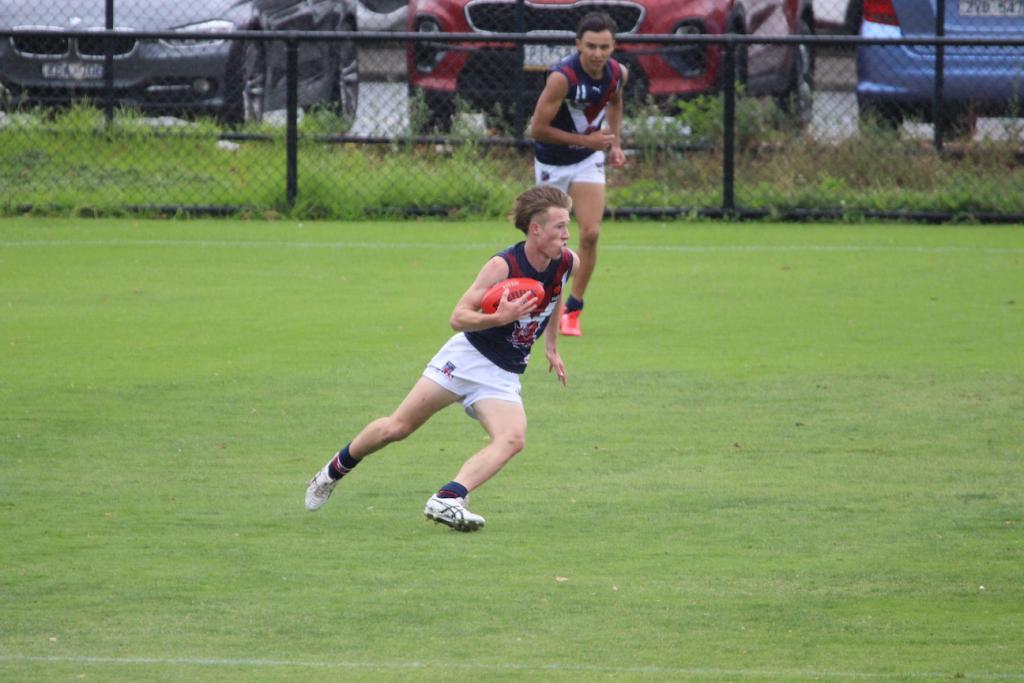 HEAVY rotation and the constant effort to keep connected with such large squad numbers are a couple of factors the Sandringham Dragons are used to facing each NAB League season. But despite the impact of unforeseen lockdowns, representation honours, and school football commitments, head coach Jackson Kornberg says his ladder leading side has enjoyed a sense of “continuity” in 2021.

“I think in any club the main challenge is keeping the group connected with so many different things going on throughout the year and all the lockdowns,” Kornberg said. “With our training the playing group gets a bit sporadic at times in terms of where everyone is, but I think the key thing with all clubs will be the challenge of trying to stay connected. Our group has done that really positively.

“Our leaders have been really good in the sense of keeping the group together and connected. We’ve got a leadership group of seven who are split across 18-year-olds and 19-year-olds, private school and non-private school, which helps to connect different areas of the list.

“Across the board it’s been good to be able to have a lot more continuity with our team. In the past we’ve had mass changes week-on-week depending on availability but this year has been more around form and picking guys on that because being an Under 19 competition, we just don’t have the same number of boys who become unavailable after Round 4.”

The Dragons have fielded players across four different birth years in their Under 19s program this season, but also rely on a strong core of players who have consistently turned out at NAB League level. The plaudits often go towards first round prospects Finn Callaghan, Josh Sinn, Campbell Chesser, and Blake Howes, but Kornberg is bullish on the talent of a few other draft eligible talents on the precipice of higher honours.

“Certainly Lachie Benton is someone who sits outside the Metro squad who probably deserves an opportunity and I believe he should be in the Metro squad off his form,” he said. “He’s someone who played in the 16s championships games two years ago for Vic Metro and I thought he was really solid. Form talks and he’s been playing some really good footy.

“Charlie McKay as well. He and Luke Cleary are up there arguably as the two standout 19-year-olds in the competition. Charlie has been one of our more consistent players through the midfield. The aim was to get him a couple of games with Carlton in the VFL… but certainly as one of our vice-captains he’s a player that is the first picked in the team, you trust in and I think his teammates trust him as well.

“He and Lachie are probably the two main ones sitting just outside (Vic Metro selection), and obviously Luke Nankervis who was part of the initial squad. He’s such a new prospect to the pathway and has really skyrocketed in his form at NAB League level.”

An interesting quirk of Sandringham’s squad this year has also been the presence of a couple of recently-listed AFL rucks in Max Heath and Jacob Edwards. Most sides would be in strife having lost their two premier talls at the mid-season draft. Not so the Dragons, who Kornberg says have a “strong philosophy of developing talls” and are again stacked in that department.

“As I said to (talent operations lead) Mark Wheeler after the mid-season draft, if there was ever going to be a year where we lost our two ruckman, this’d be the year,” he said. “We do have a large supply of talls in our team this year. Not necessarily just rucks, but across our key backs and key forwards as well.”

The most recent addition to said supply is 200cm local football coup Angus Grant. Having shown top form outside the Sandringham program, he and 17-year-old Charlie Clarke have been rewarded with entry into the elite talent pathway and promise to continue the squad’s healthy sense of internal competition.

“Charlie’s a 17-year-old who’s been playing some really good footy at Port Melbourne Colts in the seniors,” Kornberg said. “That’s a really strong team and competition, so for a 17-year-old to be performing really well in a senior team we thought it was appropriate to reward him and bring him into the program. He’s played a handful of games.

“Gus really hasn’t been involved in the pathway at all. He’s 200cm, plays at Old Mentonians in the seniors and for school footy, and has been kicking lots of goals throughout the year. Again, it’s good to see guys and for those outside of the program that we certainly take into consideration local form and we are rewarding good local form. We’ve got no qualms whatsoever about bringing them in and rewarding them.”

While the make-up of the final few NAB League rounds before finals is still yet to be confirmed, Metro regions are hoping to return to action soon after their Country counterparts do so on Sunday. If one thing’s for sure, it’s that Sandringham will be a clear flag contender having beaten strong challengers like Oakleigh, Northern, and Greater Western Victoria en route to its 8-1 record.

For Kornberg and his budding draft hopefuls, the allure of finals presents more than just ultimate team glory. As history has shown, it’s a great chance for players on the fringe to stamp their credentials on the big stage.

“The more games you play, the more opportunity players get to expose themselves to recruiters,” he said. “I look back to our 2016/2017 years which we had pretty successful draft years… I’d argue two or three more kids got themselves drafted off the back of those finals series and the team playing well.”