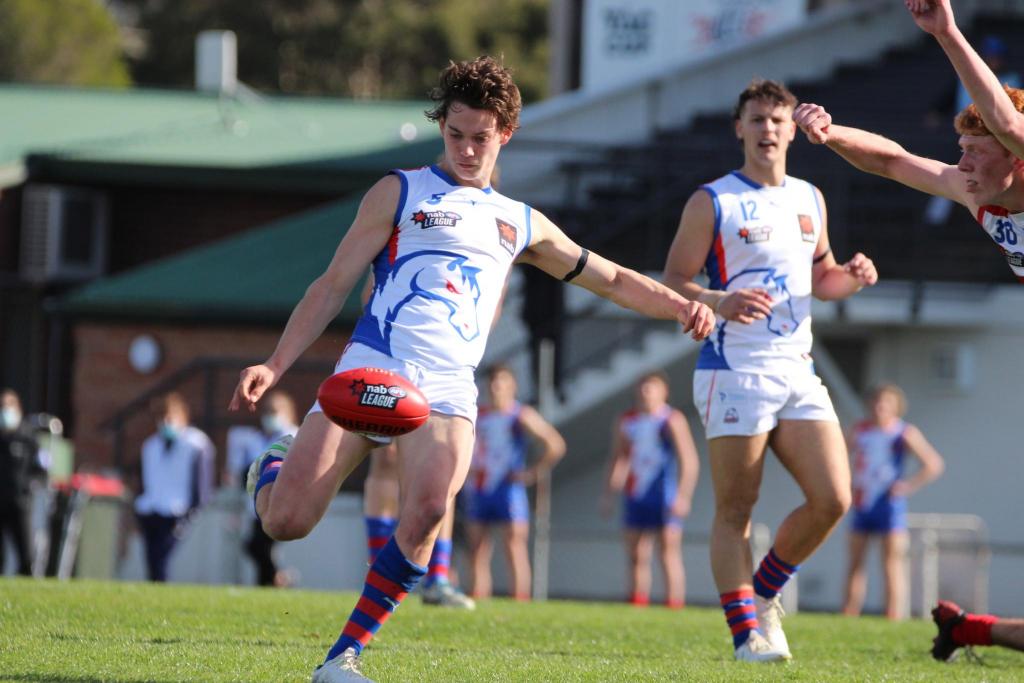 WHILE Country regions prepare for a return to NAB League action this week, Metro talent programs are holding onto hope they’ll still be able to get on the park before finals. Oakleigh Chargers is one of those regions, the competition’s reigning premier and producer of the last two number one picks – three if you include Charlie Rowbottom‘s selection in the women’s intake last month.

Talent operations lead Jy Bond says he “feels for the kids who’ve missed out on a lot of footy” but is “grateful” that players were able to show their talent at the start of the year, and “optimistic” of the potential for more before season’s end.

“This year’s been a challenging one because it’s been difficult to get continuity in our group,” Bond said. “We’ve had the stop-start nature of the season with lockdowns and what-not, but have done a lot of positive work maintaining connection where possible. It’s also given us opportunities to play pretty much 99 per cent of our list barring a couple of kids with long-term injuries. That’s been a real bonus.

“Obviously Nick Daicos has been pretty handy, Sam Darcy is right up there with him. Then there’s Youseph Dib, Karl Worner, Giorgio Varagiannis, Lochie Jenkins, Paddy Voss and Sam Collins. These are the types of guys that have been able to play the majority of games which has been good.”

While the Chargers’ fleeting premiership defence adds motivation in a team sense, Bond says the chance to play finals serves a greater purpose in terms of opportunity and exposure. Sitting fifth in the Metro pool at 3-6, Oakleigh may need to lean on Wildcard Round entry to the finals, but have a clean injury slate and are “every chance to win some games” at full strength.

“It’s definitely not a win-loss (business) but if you’re a young man or woman in the NAB League and you’re wanting to get to the next level, you’ve got to be competitive,” Bond said. “It helps when you’ve got a full team to pick from, this year we’ve been unable to have a lot of our kids to get some cohesion.

With two players, father-son prospects at that, well in contention to continue Oakleigh’s streak of number one picks, the often taken for granted opportunity to simply play may have a massive impact on how the draft plays out. Daicos (Collingwood) and Darcy (Western Bulldogs) are the pair in question, but have only played together thrice as Oakleigh teammates.

“In terms of Sam and Nick, either one could be picked number one depending on the team and arguably they’d be hard to split, they’re two very different players,” Bond said. “They’re both top-end characters, they’re both likeable, they’ve both got a bit of cheek about them but they’re also very hard-working and really good upstanding characters.

“We focus on the talent a lot at Oakleigh but something we place quite highly in our players is their character and whether they’re going to fit into a club and come out as good people which is almost more important that their footballing ability.”

Along with the usual crop of top-end talent in a draft eligible sense, the Chargers’ squad strength is well poised to carry on into next year. 10 Oakleigh products were selected for Under 17 representative duties this year, and most have also turned out already at NAB League level. Bond says the region is “buoyant” on its next batch of potential stars.

“We’ve got a really strong group of 17-year-olds which bodes well for the future,” he said. “If you look at that 17s group we’ve got quite a strong nucleus there for next year which is pleasing… and we’ll top that up with a lot of other kids that are running through the program this year and potentially others who if they’re unlucky not to get drafted this year, they’ll get the opportunity to come back as 19-year-olds.”

With one eye on this year’s draft and the other on the future, Oakleigh has been able to achieve great success over the last decade in the sense of draftee production and premiership glory. At the moment, the opportunity for these prospects to show their worth at the highest possible level is what drives a potential flag tilt.