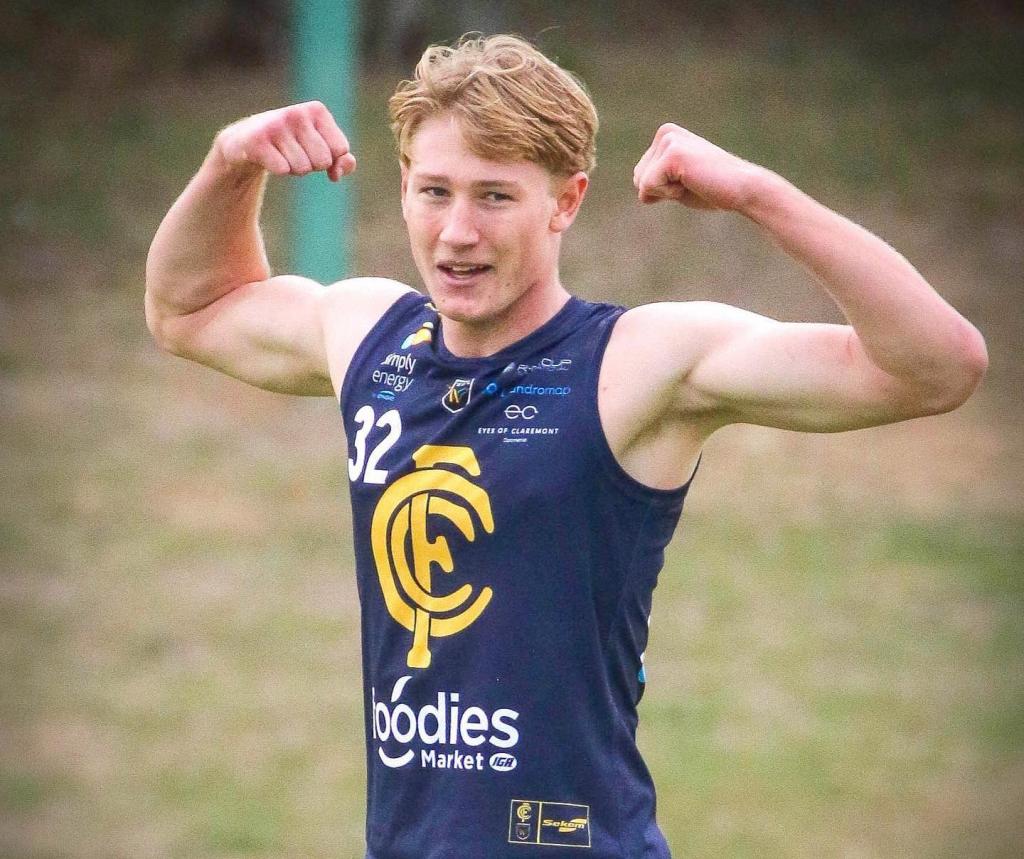 CLAREMONT extended its WAFL Colts winning streak to nine games in Round 18, after thumping an undermanned Subiaco to the tune of 68 points at Revo Fitness Stadium on Saturday morning. The Tigers were in ominous form from the first bounce, and all but wrapped up the result by half time having poured on 17 scoring shots to set up a remarkable 52-1 lead at the main break.

Subiaco fought to make for a more competitive game thereafter, booting two goals in each of the closing terms with the Lions’ first majors coming at nearly 15 minutes into the third quarter. The percentage-booster sees Claremont sit pretty in second with a game to both first and third, while Subiaco’s premiership defence may require swift saving as the Lions are currently poised in seventh after three-straight losses.

We take a look at a few of the top performers from either side in our Scouting Notes, and go around the grounds with some of the other outstanding Colts performances out of Round 18.

Having played a starring role in Western Australia’s Under 19 trial games, Sheldrick transferred that form into his latest Colts outing. The strong-bodied midfielder was typically prominent at the coalface, cracking in to win his own ball and making repeat efforts in tight scrambles. He found plenty of the pill and complemented his inside game well by finding a bit of green ball on the outer, bursting forward and delivering punchy kicks into attack. While his execution was sometimes inconsistent, you couldn’t fault Sheldrick’s work rate as he collected a game-high 28 disposals.

Another who really boosted his stocks in representative colours, Stretch plays the small forward role so well. He again proved a dynamic part of Claremont’s balanced front six, creating a wealth of opportunities and diverse avenues to goal. His forward pressure caused spills and chaos around goal, his speed off the mark saw him get off the leash when leading, and his evasiveness caused plenty of headaches for Subiaco’s defence. Stretch also poses a marking threat with his leap, and nabbed his lone goal of the game by lurking at the back of a contest and judging the ball well to mark overhead in the goalsquare. He had a couple of long-range set shots fall short and was unselfish enough to give a couple off, too.

After a foray to defence while pressing his claims in the state squad, van Rooyen looked back to his ominous best up forward on Saturday. The bullocking key position prospect was an imposing force in the early stages, launching himself into marking contests and taking opponents with him. His strength drew panic from defenders in one-on-one situations, where van Rooyen would protect the drop zone and take marks despite being fouled from every angle. At ground level, he made things happen with punishing tackles and fend-offs, bullying the undermanned opposition at times. After attending a single centre bounce and working well up the ground, van Rooyen was stationed deeper to cap a fine game which yielded 22 disposals, nine marks, and six goals. He looks far too developed to be playing Colts footy, at least when he shows this sort of form and confidence.

From a matured tall prospect to one with plenty of development left, Brown continues to show glimpses of his potential. The raw 199cm talent rotated between the ruck and key forward posts on Saturday and earned plenty of chances to impress with his 10 disposals, five hit-outs and four scoring shots. While the bottom-ager snapped home a terrific goal in the second term, he put another three chances wide and showed his rawness with a couple of dropped marks inside attacking 50. But with his height, reach and overall upside as a tall, Brown still has plenty of time to fill out and refine his skills at the WAFL Colts grade.

Playing almost exclusively as a key forward this time out, Benning was on fire with four goals and arguably the best highlights package of anyone afield. He looked unbelievably confident, proving difficult to spot on the lead and plying his trade both in the air and at ground level. The Fremantle NGA prospect presented strongly inside 50 and got separation with his turn of speed, while using that same trait to apply good forward pressure. His best goal came after smothering a kick-in before mopping up and snapping home, but Benning also finished from the pocket and via a 45m set shot. He made good on terrific service and has shown a steep rate of development in recent weeks to give the Dockers – and other recruitment teams – something to think about.

Arguably Subiaco’s best and most damaging player on a tough day, Evitt produced a good amount of drive from midfield. The bottom-ager is built well for a smaller prospect and showcased his handy turn of speed, helping the Lions move to the outer and break forward with intent. Evitt backed his pace and was able to generate more run as the game wore on, while also hitting the scoreboard with two excellent second half goals. His first major came on the back of pure gut running, as the 17-year-old streamed through midfield to deliver a long kick forward, before getting the ball back and slotting it home from just inside 50. His second was converted closer to the big sticks, as he crumbed a long ball to the hot spot and snapped through on his left foot.

Kemp was up against it given Claremont’s depth and strength in midfield, but did well to finish the game as his side’s most consistent ball winner with 27 disposals. He worked into the game but was made to think quickly, bombing clearing balls forward and flicking away handballs under heavy pressure at the contest. His best moments came in the final term; finding a bit of space and showing poise to hit Evitt inside 50, before staying down as Claremont defenders flew to swoop on the ground ball and nab a goal late in the piece.

Swan Districts continues to soar atop the WAFL Colts ladder after defeating Peel Thunder by 38 points, proving more productive forward of centre with double the scoring shots in a 12.14 (86) to 7.6 (48) victory. After streaming ahead with eight goals to one in the first half, they proved too good to topple thereafter.

Max Chipper was back to his accumulating best with 39 disposals and eight marks for the Swans, as Noah Hannan also ticked up over 30 touches to go with six marks and five inside 50s. Tyrell Metcalf snared three goals for the second week running, while in-form midfielder Ben Hewett managed two. State Under 19s defender Rhett Bazzo showcased his aerial game with eight marks.

Joel Rush was Peel’s sole multiple goalkicker with two, as the likes of Scott Tuia and Byron Finch also hit the scoreboard to complement their 20 disposals apiece. State Under 19s utility Brady Hough notched a team-high 33 touches, while Luke Polson found it 13 times after making his League debut last week.

East Fremantle moved up into fourth place with a crucial win over South Fremantle, leading at every break in the 50-point triumph. The Sharks were served well by returning stars; namely Taj Woewodin (25 disposals, six inside 50s), Jed Hagan (20 disposals, one goal) and Jack Williams (17 disposals, seven marks, 5.3). Joshua Cripps, the brother of Carlton’s Patrick, was also prominent with 23 touches and three goals. For South, Chase Bourne and Caleb Stephens flew the flag as the only Bulldogs to register over 20 disposals.

Meanwhile, East Perth consolidated its standing in third with a 91-point thumping of Perth. Midfielders Oscar Armstrong and Kade Dittmar both snared two goals from over 20 disposals each, but Royals spearhead Jye Amiss was the star of the show. The rising key forward booted six majors from 18 disposals and 11 marks, bringing his season goal tally up to 47 from 11 games. On a tough day for the winless Demons, no player registered over 13 possessions.

Plenty of prospects were also away on PSA duties, while a few also played up the grades. Perth’s Jack Avery continued his good form with 20 disposals and six marks in Perth’s League loss to East Perth, while bigman Jake South (13 disposals, 14 hit-outs) and highly-touted midfielder Matthew Johnson (seven disposals) suited up for Subiaco’s reserves in a 28-point loss to Claremont.