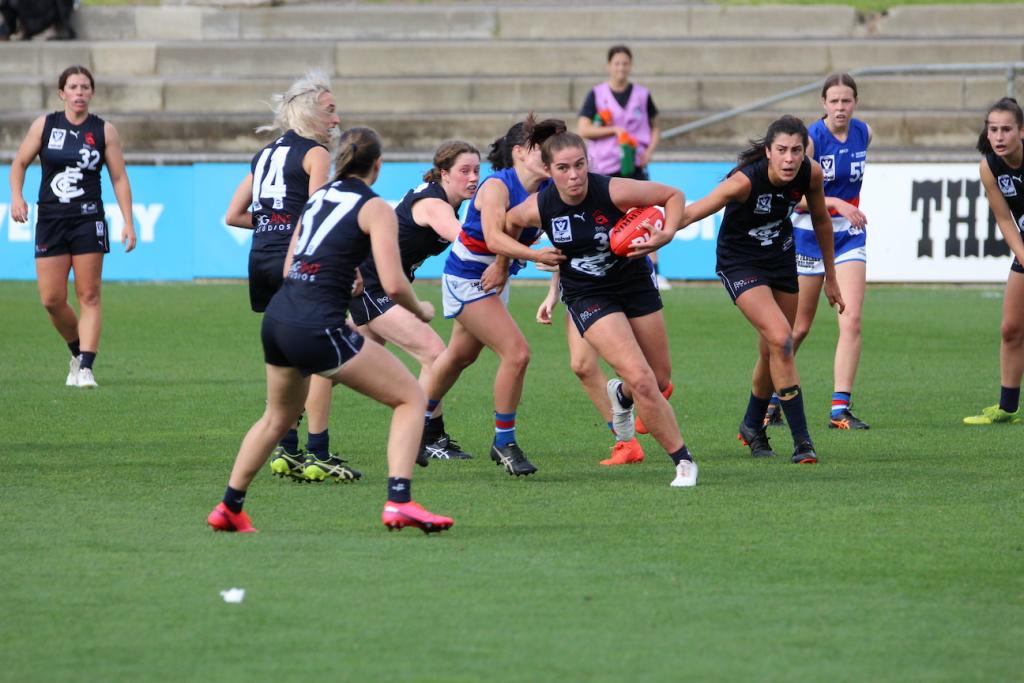 IN summarising the 2021 Victorian Football League Women’s (VFLW) season, Draft Central will run through a team-by-team review of how each of the sides fared, and who some of the standout VFLW-listed performers throughout the clubs were. The next team in the firing line is Carlton.

Season in a Sentence: “Despite wins against two top four sides and its inspired late-season charge, a five-game losing streak put Carlton firmly on the outer in terms of finals contention.”

The 22-year-old skipper was a reliable figure for her side across 12 games this season, locking down her usual spot in defence with averages of 10.1 disposals, 2.6 marks, and 2.3 rebound 50s. Bild often had plenty to do and looked to drive her side out of the back half in relentless fashion, forming a strong partnership with vice-captain, Jen Lew during the early part of the season in that sense.

One of just three Blues who managed to play in all 14 games this season, Lawrence also topped her side’s goalkicking charts with a perfect goal-per-game average. A mainstay in the key position posts, it wasn’t always easy being a Carlton forward this year, but Lawrence scored in her last six outings and notched two majors on four seperate occasions.

While Lew was sidelined for much of the year and only played six games, she proved a crucial member of the side each time she got on the park. A rock in defence across the first four rounds, the vice-captain had plenty to do in those outings before injury struck. She returned to the fold in Round 13 and made good on a switch up forward, finishing the year with averages of 18 disposals, 4.5 marks and 4.7 tackles.

Arguably the find of the year for Carlton, Peterson offered plenty of forward drive across her 10 games. She was stationed mostly out on the wing and enjoyed stints up forward, running all day and causing headaches for the opposition with her speed. With averages of 15.2 disposals, 4.0 tackles, 2.7 inside 50s and a goal every other game, Peterson’s work-rate proved a key part of Carlton’s cause.

The Blues stacked up their side with some incredibly influential AFLW talent towards the end of the year. Paige Trudgeon (13) and Charlotte Hammans (10) were the only senior-listed Blues to notch double-figure appearances, as the likes of Grace Egan and Abbie McKay made massive impacts in their brief stints. Lucy McEvoy was another who fared well in four games, while Maddy Guerin added a spark and Courtney Jones proved a key goalkicker with 10 majors in nine outings.

Bry Gurr and Millie Klingbeil were the two other Blues to play every game in 2021 alongside Lawrence, while ruck Jorja Borg proved a key cog with her 24.7 hit-outs per game across 13 appearances. Teresa Zampaglione was one who provided a bit of speed to both sides of midfield with 12.8 disposals and 4.8 tackles per game, as leadership group member Esther Honybun also contributed strongly throughout the year, only missing one game.