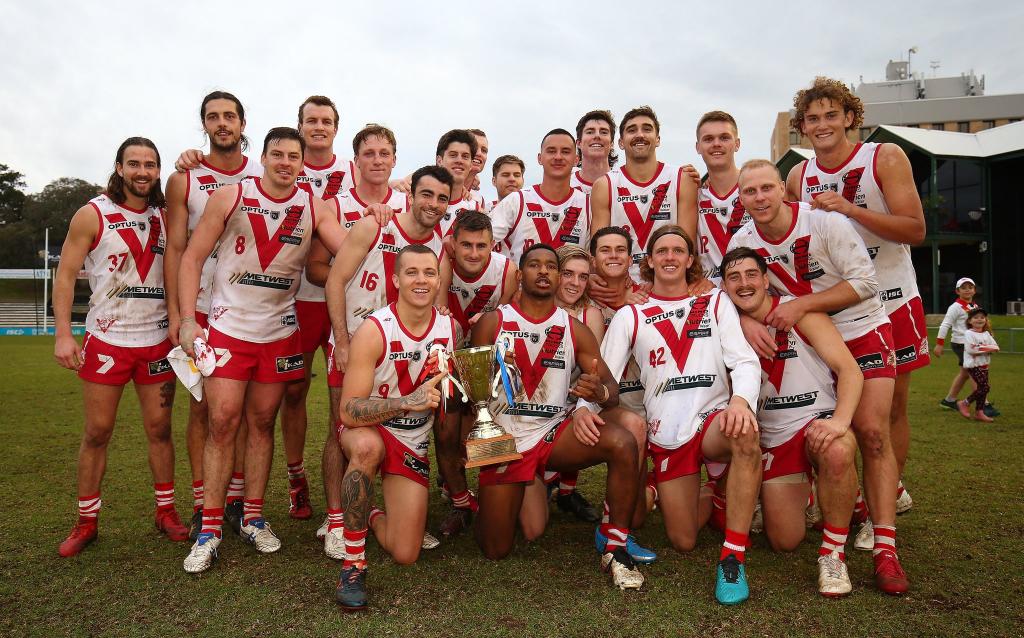 LOCKDOWN saw yet another round of VFL football postponed, but there was still plenty of state league action for football fans to enjoy around the nation. Minor premiers were officially crowned in South Australia and Tasmania as regular season fixtures wind down, while an established top five still has some shaking up to do over in Western Australia. We recap all the results and big performances in this week’s state league wrap.

Glenelg found its way out of another tight spot on Saturday, overturning a 17-point deficit at the final break to surge past Norwood and claim the SANFL League minor premiership. The Bays made better on their chances having trailed at the first three breaks, enacting a seven-goal final term blitz to secure the 10-point victory.

Matthew Snook was again instrumental for Glenelg in midfield, leading all comers with 28 disposals and 10 clearances, while spearhead Liam McBean snagged three goals. Draft prospect Nasiah Wanganeen-Milera made an impact in his second senior outing, with his first League goal proving the sealer. For Norwood, Richard Douglas did all he could with 23 disposals and two goals.

The race for fifth spot is heating up, with Sturt applying plenty of pressure to current placeholder, Norwood after a statement-making victory. The Doubles Blues kept West Adelaide goalless in a 76-point drubbing on the road, putting them just a game behind the Redlegs in sixth but with superior percentage. In Sturt’s win, James Battersby and Casey Voss topped the disposal charts with 32-apiece, while Steven Slimming led a trio of Blues who booted two goals each.

Port Adelaide was the side Sturt snuck ahead of in sixth, after the Magpies suffered a 13-point Showdown loss at the hands of Adelaide. Up-and-coming senior players Lachlan Gollant and Dylan Williams snared four goals for their respective sides in a game which was lead by the Crows from the first goal. Bigman Billy Frampton was an ominous figure with 30 disposals and 13 marks, as James Rowe returned to the grade and snared a pair of majors, while Sam Mayes (35 disposals) had 15 more touches than any other Port player.

Back in the top half of the table, North Adelaide secured an important three-goal win over the second placed Woodville-West Torrens, strengthening the Roosters’ hold on third spot with the remaining chance to jump into second. The victors booted six goals to two after half time, with Aaron Young (29 disposals, six clearances, one goal) and Campbell Combe (27 disposals, eight clearances, one goal) instrumental in the result, while Daniel and Troy Menzel each snared two goals for the Eagles.

Pick one contender Jason Horne starred in South Adelaide’s 52-point victory over Central District, which keeps the Panthers a game clear in fourth. With his side trailing at the first break, Horne turned it on in term two with three goals to help gain the ascendancy. South never looked back from there, cruising to its ninth win of the season with finals less than a month away.

A pair of thrillers were offset by Launceston’s ruthless 146-point belting of Glenorchy in Round 19 of the TSL, a result which saw the Blues officially claim this year’s minor premiership. Usual Tasmania Devils defender Zach Morris dominated with a swing to the front half, booting nine goals in a brilliant best afield performance. Brendan Taylor (four goals), Jake Hinds (three), Jay Blackberry and Jobi Harper (both two) also claimed multiple majors among the Blues’ 13 individual goalkickers in the 28.13 (181) to 5.5 (35) romp.

While North Launceston had the bye, fellow top four sides Tigers and Clarence locked horns on Saturday to spice up the race for third. After trailing at every break, Tigers slotted three goals to one in the final quarter to take home a crucial five-point win and jump Clarence into third spot via superior percentage. Marcus Davies was the victors’ sole multiple goalkicker in a brigade of eight scorers, as Zach Adams was named their best. Josh Green snared three goals for the Roos, but it was Sam Green who took home the coaches votes in a tight loss.

The round’s other close contest saw Lauderdale work back from a 33-point half time deficit to defeat wooden spooner North Hobart by two points, securing the result with seven goals to two after the main break. Allen Christensen was typically terrific for the Bombers in their remarkable win, while a bunch of Tasmania Devils prospects fared well for North Hobart. Will Splann (two goals), Dom White and Jye Menzie all found the big sticks, while Tyler McGinniss was named among the Devils’ best players.

The WAFL League top five remains unchanged after Round 18’s results, with East Perth the only side to climb the ladder on a four-game weekend of West Australian football. The Royals extended Perth’s losing streak with a 25-point triumph, having lead at every break on home turf to jump into sixth over East Fremantle. Aidan Lynch (32 disposals, 10 marks, one goal) led all comers, while Royals teammate Thomas Edwards-Baldwin was the game’s lone multiple goalkicker with three.

Arguably the weekend’s best and most important game saw Subiaco strengthen its standing atop the table with a five-point comeback win over fellow finals contender, Claremont. The Lions were jumped in the first term but worked back to within striking distance at 17 points adrift come the final break, before pouncing with four goals to one in the fourth quarter. Greg Clark was the only player to tick up to 30 disposals, while Ben Sokol booted six goals and Lachlan Delahunty (23 disposals, 25 hitouts) also proved instrumental in the win.

With the Tigers going down, reigning premier South Fremantle went a game clear in second after defeating East Fremantle by 61 points. The Bulldogs broke the game open after half time, running out the game with 11 goals to three in a ruthless showing of their firepower. Brandon Donaldson (five goals) and Mason Shaw (four) lead a strong core of eight goal kickers in the win, as Tom Blechynden notched a game-high 25 touches.

Meanwhile, Swan Districts remains three games clear of the finals drop in fifth after a kicking away from Peel Thunder in a 52-point win. The Swans were served well by Aidan Clarke (32 disposals, two goals) and Frank Anderson (30 and two), with all of their top seven ball winners also hitting the scoreboard. Tyrone Thorne saw the most ball though, registering 33 touches and nine tackles for Peel in their fourth-straight loss. West Perth and West Coast each have a game in hand after sitting out this weekend.