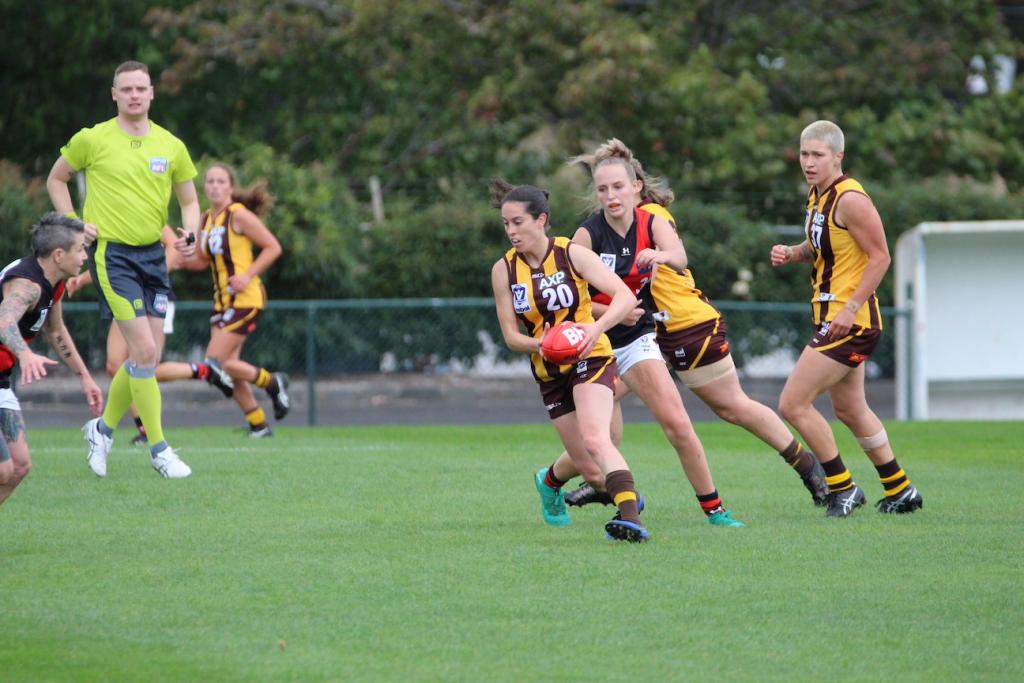 IN summarising the 2021 Victorian Football League Women’s (VFLW) season, Draft Central will run through a team-by-team review of how each of the sides fared, and who some of the standout VFLW-listed performers throughout the clubs were. The next team in the firing line is Hawthorn.

Season in a Sentence: “Hawthorn provided competitiveness throughout the year, with a high percentage for a 5-9 team, the highest of the non-finalists, with plenty of impressive performers in the brown and gold.”

Leading from the front in what would be her final season at VFLW level after a glittering career, Hutchins passed 250 senior games and was reliable up both ends throughout the 2021 year. Predominantly stationed in defence, her sure hands and leadership were crucial for the Hawks who witnessed a lot of change throughout the season with more than 50 players donning the brown and gold. Hutchins averaged 15.8 disposals, 2.3 marks, 3.2 tackles and 5.1 rebound 50s, whilst also slotting four goals in her 13 games.

Another Tasmanian prospect in the VFLW who has really impressed is Williams, who led the Hawks’ goalkicking in 2021 with 11 majors in 14 games. Not missing a beat all season, Williams was damaging in the forward half, averaging more than two inside 50s per game to go with her 11 disposals and two marks per match. Remarkably was the only player to run out in every game.

As reliable as they came in defence, Richardson is a developing talent who has stepped up at senior level. She averaged 11.5 disposals, 3.4 marks, 2.1 tackles and 2.1 rebound 50s to be a mainstay in the back 50 alongside Hutchins and some high profile names. The former Eastern Ranges talent is staking her claim to step up to the next level with a similar path to that of recently drafted Jasmine Ferguson.

Only played the nine games, but had an impact across the ground, averaging 17.0 disposal, 5.6 tackles, 4.0 rebound 50s and 2.1 inside 50s to be a prolific ball-winner. She averaged the most disposals of any player in her team with more than one game to their name, and provided some good run across the ground.

The Hawks were brimming with AFLW talent both currently on lists, but also primarily cut and looking for second chances. Phoebe McWilliams (two games) and Mikayla Morrison (four games) were the ones who retained her spot for next season, with the likes of retiring Chantella Perera (four games) returning to the club, Katelyn Cox returned after her stint with North Melbourne to be another important cog in the midfield, as did Gold Coast’s Georgia Bevan, whilst Tamara Luke, Alison Drennan and Nadia von Bertouch all came across from the Southern Saints, and Kristy Stratton from Collingwood.

The Hawks rotated through a lot of players in season 2021, with Keeley Sherar (Carlton), Eloise Chaston (Collingwood) and Ashanti Bush (Gold Coast) all getting picked up. Kristen Hay, Emily Gilder, Dominique Carbone, Chloe Bain and Kate Dudley were the other players to run out in 10 or more games, providing some continuity for the side. Some young Vic Metro and Country talent that donned the brown and gold included Grace McRae (Gippsland Power), Bridget Deed and Cadhla Schmidli (Eastern Ranges).