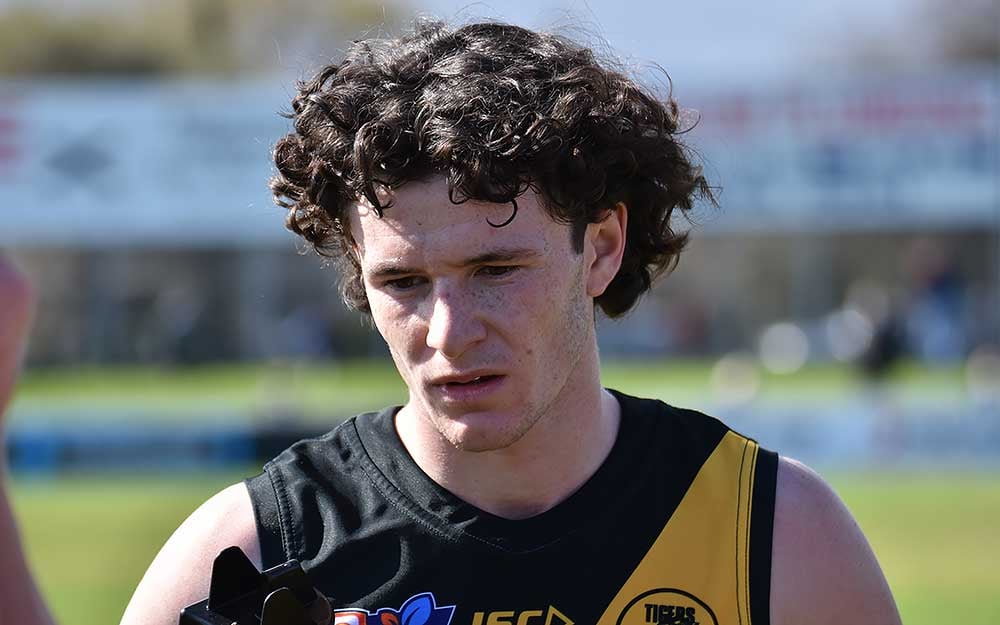 GLENELG AFL Draft prospect Lewis Rayson stepped up to the South Australian National Football League (SANFL) Reserves competition following a consistent run of form in the first half of the season. Following 11 games averaging more than 27 disposals per match at the junior level, Rayson held his own against senior opposition during the Bays’ 13-point win over Norwood. He is our next Player Focus.

In his Reserves debut, Rayson struggled to get involved early starting off the ground and then playing off the half-back flank where he remained all game. Playing a similar position while rolling up to the wing in the U18s sees him find plenty of the ball and springboard his side into attack so it was no surprise he streamed forward on a few occasions to get involved in forward movements, but he was seldom found.

He remained disciplined defensively playing back shoulder at stoppages to keep his opponent in front of him and push him into congestion, while not leaving for 50/50 assistance and sticking on his man. He stayed goal-side and forced his opponent boundary-side but did lose his matchup at times around packs.

His focus defensively did not waver, nor did his neglect when providing an option moving forward. He looked to plug space and opposition rebound and transition as he was able to get back before a loose Norwood player, but aimed to locate as soon as possible, doing so efficiently.

His opponent was able to mark on a hard lead pushing up to Glenelg’s forward flank, but Rayson was right on his hammer showing high work rate to not be lazy and let him go. His first, and possibly only, glaring defensive blunder was allowing his opponent a shot at goal running onto a pack to rove and dribble into an open goal. Rayson put an arm out but he should have stepped across and engaged body to move him off his line and halt his rampaging momentum. No damage done though; the shot missed.

Although he started the quarter on the bench as he did for the first half, he started to get busy towards the end of the quarter. Defensively he located at stoppages and stayed back shoulder on pressing opponents, but he started to find the footy as we have become so accustomed to seeing from him at U18s level.

He used his body to protect the line of the ball and gathered cleanly to handball quickly to voice of a teammate. He became a chipping option on a couple of occasions with one kick just falling short to a teammate, and another kick into the corridor being smothered after telegraphing it a little too long when playing on from a mark. Neither miss resulted in a shot on goal as his disposal only improved from there with a good, contested mark playing from behind resulting in a deep inside-50 kick.

Rayson started on the ground after his busy finish to the third quarter and repaid the faith with a strong attack on a disputed ball as he moved the ball forward. He also showed nice evasive qualities in traffic with a quick one-two before finding a teammate just beyond 50. Another half-volley ground-gather later showed his cleanliness when the opportunity has been there, making the most of his disposals, especially his handballs.

His tackling was efficient all game despite the jump in body size with one preventing a shot at goal which could have made things interesting on the scoreboard. His final kick of the game saw him wheel onto his right boot when he did not really need to but he hit his teammate perfectly with the long kick without breaking stride.

A serviceable debut for Rayson who played his role as a defender in a disciplined matter, before finding some confidence to go out and find the footy in the second half as he does at U18s level. He probably played a little conservatively in defence at times not going third man up to spoil when possible and not zoning off to play a little bit of an attacking role, but on debut he probably played his role the way he was asked. He worked hard to cover the ground and defended stoutly, tackling efficiently, and finding his feet with his disposal in the back end of the game.