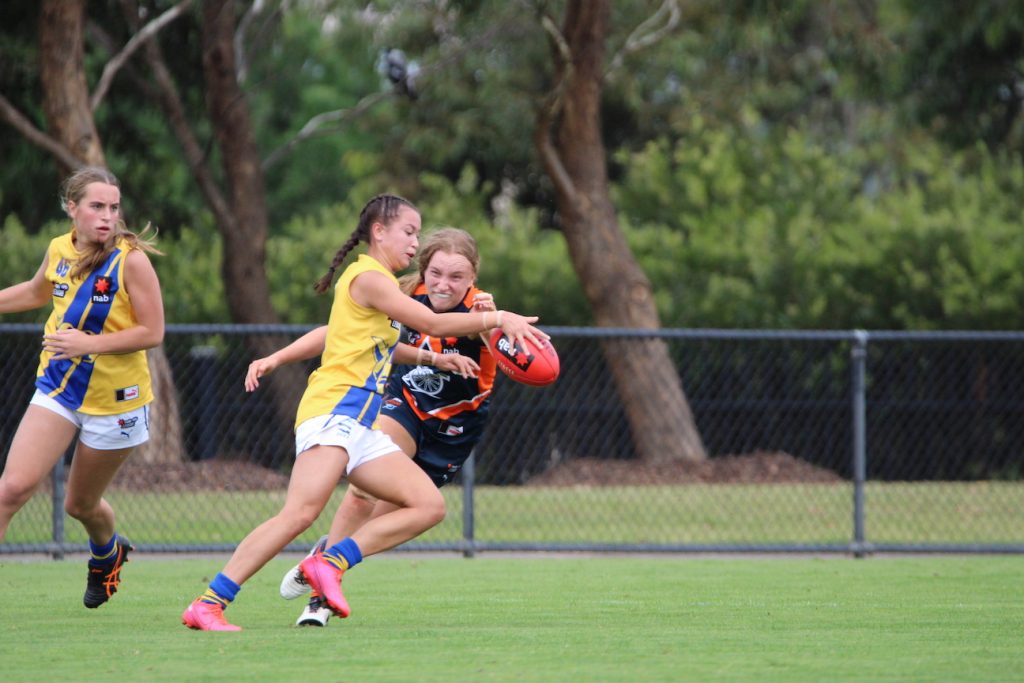 IN a new series looking towards the 2022 AFL Women’s Draft, we take a look at some teams that have outstanding prospects who showed plenty of promise in their bottom-age years to suggest the team might have plenty of potential for the next season. Next up is the Western Jets, who had two players make the Vic Metro Under 19s side as bottom-agers, and a further three players in the Vic Metro Under 17s squad.

Playing in her third season at the Jets, Baskaran continued her rise from 14-year-old talent to standout performer in her bottom-age year over the past two seasons. She averaged 23.4 disposals, 2.0 marks, 5.8 tackles and 5.8 inside 50s, becoming a remarkably versatile player thanks to adding another string to her bow. Initially playing off half-back in 2019, Baskaran pushed up to become a premier wing in 2020 – albeit off three games – before going inside in 2021 where she ticked off those boxes as well. Despite standing at 162cm, Baskaran is hard at it, can win the ball inside and out, and has an elite kick which is why opponents cannot afford her time or space.

The other Western Jets player to earn a spot in the Vic Metro Under 19s side, Ham played both Metro matches predominantly in the midfield alongside the top two picks in this year’s draft, Charlie Rowbottom and Georgie Prespakis. Ham is that bigger body at 178cm and can thump a ball well over 50m which makes her damaging around stoppages when she can win it. A very different player to Baskaran in the sense that she might not have the precision kicking, but has the power, as well as size to dominate overhead, and still is fierce at ground level. Ham finished the 2021 NAB League Girls season averaging 18.0 disposals, 3.3 marks, 5.0 tackles and 4.1 inside 50s to prime herself for a massive 2022.

A very different prospect in terms of her development over the years to Baskaran and Ham, Russell came on in leaps and bounds in her second season at the club. Not playing a game in 2020 due to the shortened season, Russell played eight games in 2021, and recorded the most hitouts of any NAB League Girls player. She averaged 23.8 per game to go with 8.9 disposals and 2.4 tackles, giving her teammates first access around the ground at stoppages. Possessing clean hands and a good leap, Russell has plenty of improvement left in her for the 2022 season and is one to watch, with a lot to like about the Jets midfield next year.

With plenty of upside left for the future, Woods tracked well in 2021 to earn an AFL Women’s Draft Combine invite. Whilst ultimately unsuccessful in the AFLW Draft, Woods was able to play three games with the Western Bulldogs at VFLW level, and booted three goals on debut in an impressive performance. Boasting good athleticism, clean hands and a high work rate, expect a good preseason and more experience at VFLW level to only push her case further.

The Western Jets blooded quite a few youngsters this season who could well stake their case for Vic Metro selection next year. Paige Ryan was the other 2004-born talent to make the Under 17s squad, averaging 11.1 disposals and 4.1 tackles, playing off half-back and then pushing up the ground in her eight games for the Jets. Other draft-eligible talents next year include Laura Elliott, Kiera Leare, Kate Maxwell and Jasmine Farrugia who all played eight games, while Camryn Tyrrell and Paige Trajkovski got plenty of onfield action in their bottom-age years. From a 2023 AFLW Draft prospect, Kiera Whiley was outstanding to make the Metro Under 17s squad as a bottom-ager, averaging nine disposals and almost four tackles at NAB League Girls level. Goalsneak Kensley Ward, and Ella Tyson were other 2005-born talents to impress in five games across the season.