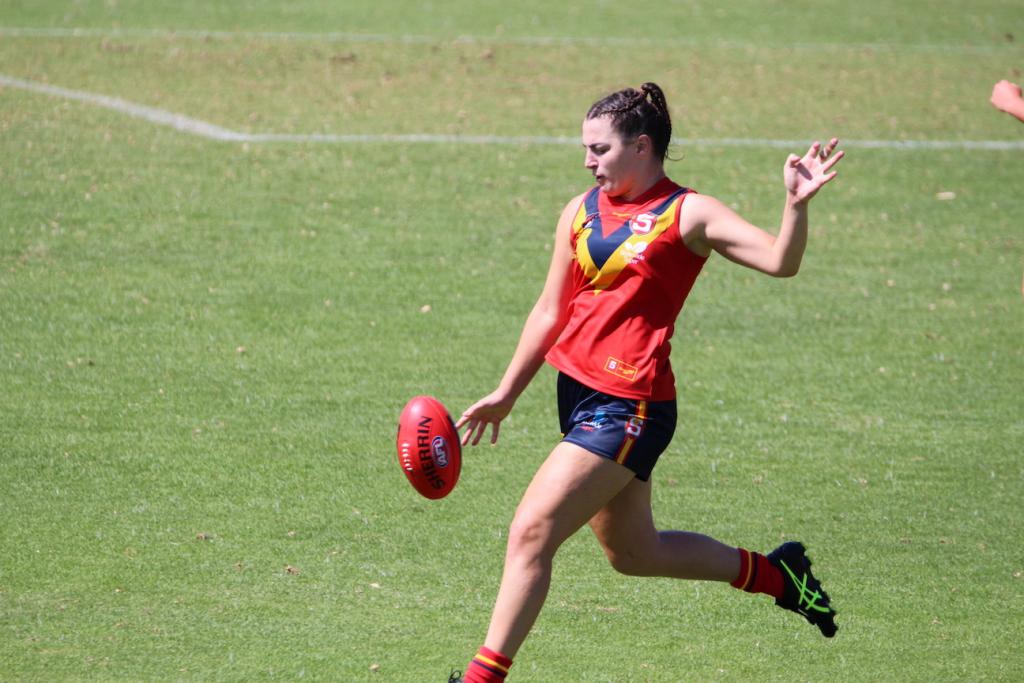 WITH only a couple of years of Australian football experience under her belt, North Adelaide utiltiy Jorja Eldridge has had plenty of learning to do in a short space of time. The 19-year-old Whyalla native hails from an ever-fabled basketball background, but committed to football last year and eventually cracked a very strong Roosters side in 2020, as a train-on player.

Eldridge played two SANFL Women’s games last year and added the same amount in 2021, while also earning a spot in South Australia’s Under 19 National Championships squad. Having moved down to Adelaide and taken up a part-time receptionist job at the club, she says she is now starting to “find [her] feet”.

“This season I’ve moved to Adelaide and I trained way more with North Adelaide in pre-season and in-season, so that’s helped me a lot,” Eldridge said.

“At the moment I’m studying exercise and sports science at university and I’m currently working as a casual receptionist at North Adelaide Football Club as well, so that’s taking up most of my time on top of football training.”

Having spent plenty of time around the club, Eldridge has also been able to lean on some key mentors and develop her own craft as a player who can impact across multiple positions. The 173cm prospect said she hadn’t “done too badly” once selected for North in Round 4, and in her three Under 19 carnival outings.

“Krissie Steen (North Adelaide coach) told me I just need to keep running, so my sprint efforts are most important to improve on,” she said. “I’ve actually had a new position this season which was being a back-up ruck for North Adelaide, rotating forward and on-ball. With that I feel that I’ve had to develop my skills a lot more, going through the midfield and getting it into the forwardline as well.

“My mentor at North Adelaide has definitely (Steen)… she’s basically been my only coach for football so she has definitely helped me along my journey. Kristi Harvey has definitely taken me under her wing and showed me the ropes. Then obviously at a higher level, the likes of Anne Hatchard (are) really good with younger girls and other players, they’re really inspiring.”

A supporter of the Crows’ AFLW team, Eldridge looks towards Hatchard and Melbourne forward Tayla Harris for inspiration on her own game. While there are still areas for improvement, the talented multi-sport athlete has also been able to transfer some handy traits over from other codes.

“A strength of mine is that I’m able to really use my body well,” Eldridge said. “From a basketball and netball perspective, I’ve had to grow up with the one-on-one body contact and finding the player. I do struggle sometimes with finding my player in defence because I like to zone off and intercept the ball, but then coming to football it’s a bit harder to do that.

“Around the ground stoppages and in the ruck are definitely my strengths (too), and I’ve got pretty good distance on my kick.”

With the AFLW currently holding expansion talks, more and more South Australian prospects like Eldridge are well poised to get the chance to showcase their development at the highest level in years to come.