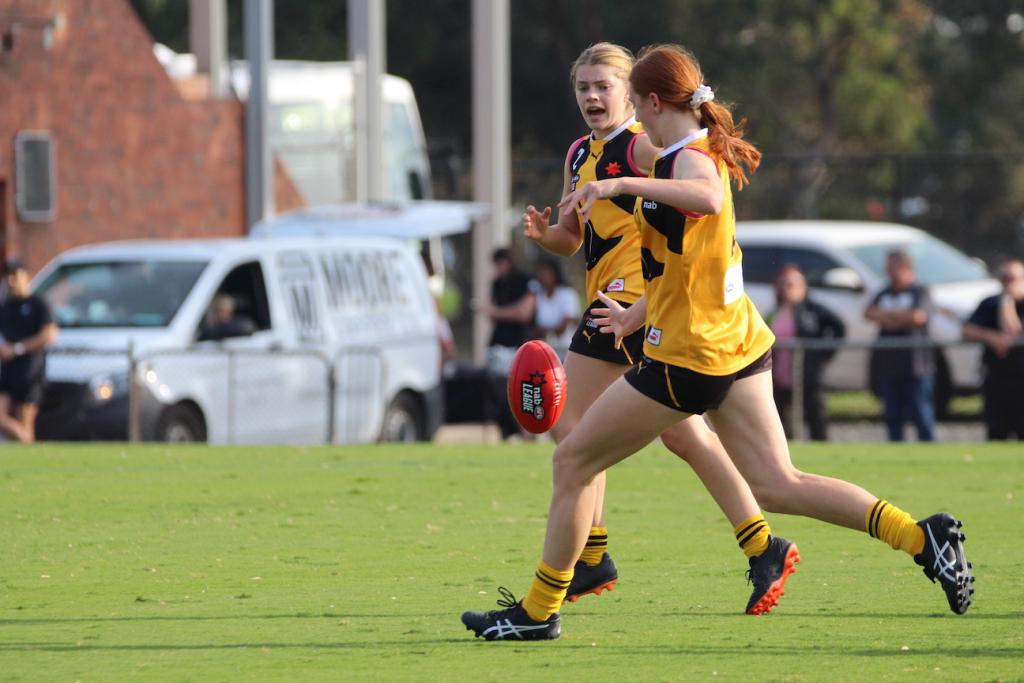 IN a new series looking towards the 2022 AFL Women’s Draft, we take a look at some teams that have outstanding prospects who showed plenty of promise in their bottom-age years to suggest the team might have plenty of potential for the next season. We start with Dandenong Stingrays, who had three players make the Vic Country Under 19s side as bottom-agers, and a further seven players in the Vic Country Under 17s squad.

Clarke kicks off the list as one of three standout Stingrays prospects who earned a Vic Country spot despite being in her bottom-age year. It is hard to miss Clarke out on the field because she has blistering speed and overall athleticism, clocking up the fastest 20m sprint time at the NAB League Preseason Testing Day hosted by Rookie Me. Having played as a defender in her Under 16s year and pushed up the ground, Clarke played predominantly forward in 2021, where she became a damaging goalkicker. Often able to win frees for being held as opponents try and stop her acceleration on the lead, Clarke is a play-on-at-all-costs talent who loves to run and gun it down the field, making her a super exciting player to watch. Unfortunately injury curtailed her chance at performing through the championships, and ended her year prematurely.

A genuine key position utility who can play at either end, Eardley earned Vic Country honours at Under 19s level, and held her own, averaging two marks and three rebounds per game across the carnival playing in defence. For the Stingrays, Eardley often played a half at each end, though it depended on the situation of the game and the rest of the side’s makeup. Booting four goals from her seven games, it can be said Eardley played a much more offensive role in 2021, averaging more than two inside 50s and just under a rebound 50 per game compared to her three rebounds per game in 2020. Her tackling pressure remained the same, and Eardley even pinch-hit in the ruck at times, though her key position roles at either end are where her best positions lie.

The third member of the Vic Country AFL Women’s Under 19s squad, Shepherd missed a chunk of football through the NAB League Girls season after going down in the historic night game against Oakleigh Chargers. She averaged 15 disposals, 4.2 inside 50s and 3.4 tackles being a bull through the midfield and someone who could extract it out of the contest to teammates on the outside. Often swinging her kicks around her body, Shepherd is a player with plenty of potential as shown throughout 2021, where she played all three games for Vic Country, and averaged 11.3 disposals and more than an inside 50 a game. Her strength around the stoppages is evident, and she is hard to beat one-on-one at ground level which makes her ideal to lead the midfield in 2022.

Clearly one of the standout prospect to miss out on the AFL Women’s Draft, Anthony is a player who could easily step up and play at VFL Women’s level, but if returning to the NAB League should play a starring role as the reigning Vic Country Most Valuable Player (MVP). Anthony might be set for a midfield gig to help expand her CV after ticking every box there was to tick as a defender, and possessing a lovely kick and strong hands to go with great decision making. Regardless of where she ends up, be it junior or senior level, Anthony will continue to be a player that clubs keep a close eye on.

Dandenong Stingrays have plenty of depth next season with players anticipated to step up and take greater responsibilities in their draft-eligible years. A few names who really impressed as bottom ages included midfielders Felicity Crank, Grace Chapman and Charley Ryan who will add good strength with Shepherd in midfield. Brooke Smith in defence and Olivia Robinson in attack are a couple of names to keep an eye on for 2022, with Ella Watts becoming a regular through the ruck. All were named in Vic Country’s Under 17s side in 2021. Also named was 2005-er Bianca Lynne another developing ruck prospect for the Stingrays. Midfielder Mikayla Williamson and tall defender Olivia Laity were other 2005-born players to make their NAB League debuts in 2021.