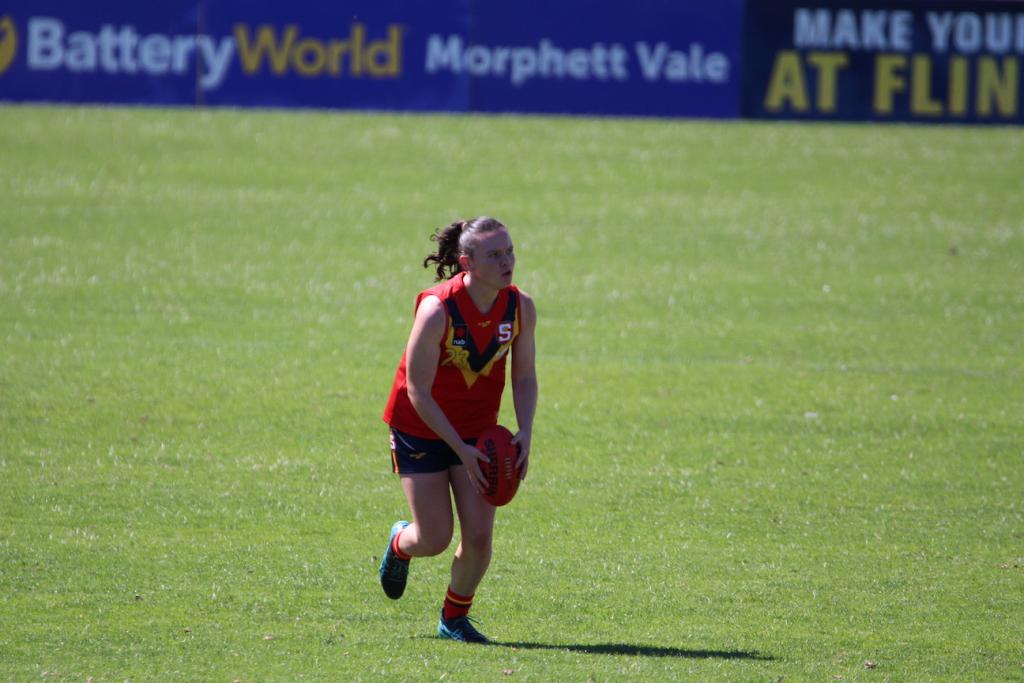 NOTING her steep improvement from her 18th to 19th years, North Adelaide’s Julia Clark is always looking to add strings to her bow. The South Australian state representative at the AFL Women’s Under 19 Championships has developed through the pathway, and, under the watchful eye of North Adelaide coach Krissie Steen and Adelaide Crows star onballer Anne Hatchard, Clark has really worked hard on her game.

“There’s been quite a few,” Clark said of her mentors.” My parents, school teachers, yeah lots of different people. I think inside of footy, definitely Krissie Steen, my North Adelaide coach at the moment has been a big motivator for me.”

The Adelaide fan has benefited from having Hatchard around the club, with the Crows midfielder sharing the 2020 SANFL Women’s Best and Fairest award in the split season last year. An astute watcher of both the women’s and men’s games, Clark said she draws inspirations from both competitions.

“Anne Hatchard. Her running is great,” Clark said. “Then in Round 1 of the AFL I watched the Carlton game and I really liked Adam Saad’s game and I based my Round 3 game off him. “He really inspired me that round.”

Clark’s football journey started six years ago, and the defensive utility stepped up from the Roosters’ juniors to the senior side, where she played in the North Adelaide premiership last year. Fast forward to 2021, and Clark was one of a number of 19-year-old talents to earn a place for South Australia.

“So I started in 2015 in the Under 14 North Adelaide junior program and then from there I went onto Hope Valley in 2016 and then continued through North and now I’m at state, which is cool,” Clark said. “My goal for this year was just to play better than I did last year, and I came out in the first three rounds and I absolutely felt like I was doing that pretty great. “I was really happy with how I was playing.”

Clark regards her strength as being able to run up the ground, work hard and support her teammates, something she is always looking to improve on to maximise her running capacity. Having played predominantly as a defender in past years, Clark moved further up the ground this season, which is a role she enjoyed adding to her CV.

“I have been training a bit everywhere actually,” Clark said. “I think I’ve mainly been on the wing and in defence. “I enjoy both I think. “I feel a lot, I get the ball a lot more on the wing, but I definitely enjoy the backline as well.”

Whilst her football is coming along nicely, Clark is also heavily focused on her studies, which she balances with her sporting commitments.

“I am at uni studying mechanical engineering and that’s a big chunk of it at the moment,” Clark said. “So just trying to push through that at the moment with footy is a struggle but I’m getting there.”