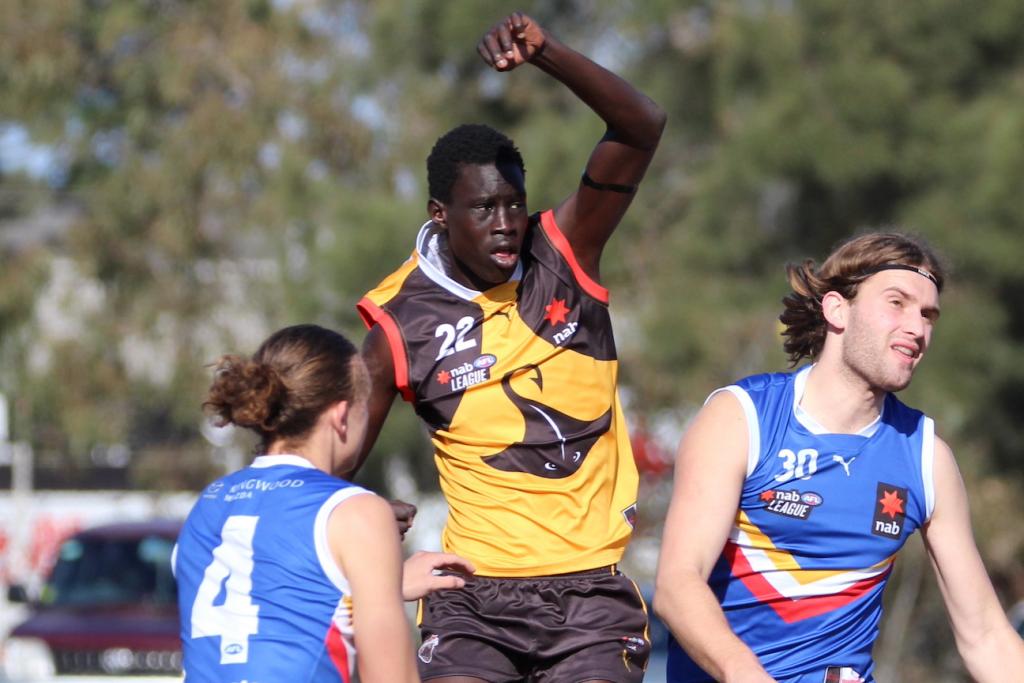 DANDENONG Stingrays ruck Mac Andrew has proven one of fastest risers in this year’s AFL Draft conversation, boasting eye-catching athleticism, handy versatility, and a knack for stepping up to the big occasions. While he is tied to Melbourne as a Next Generation Academy product, Andrew is unlikely to land at the Demons with a bid almost certain to come within the top 20.

The 200cm prospect impressed while representing Vic Country last month and upon the NAB League’s return, continued his promising form in the Stingrays’ loss to Eastern Ranges on Sunday. We put his latest performance under the Player Focus microscope, covering his every move quarter-by-quarter.

Starting in the ruck, Andrew had an immediate impact at the centre bounces with taps to advantage for the first two clearances of the game. He showcased his leap against fellow 200cm ruck Jack Diedrich, rising high and turning his body well to tap over his shoulder at hit rovers on both occasions.

At stoppages around the ground, Andrew looked to use his mobility to move into front position, rather than be flat footed and forced to engage in a wrestle. His reach also came in handy in those situations, able to get first touch on the ball from obscure positions in the ruck contest.

The Dandenong prospect was also rotated forward but was not afforded great delivery where he could get a proper run and jump at the ball. The clear highlight of his opening term was a strong contested mark from the back of a half-forward pack, taking the ball cleanly before delivering a pin-point pass inside 50 to Bryce Milford.

The second term saw Andrew rack up more of the ball, competing well on the follow-up with his clean hands but also showing his rawness and room for development. He again started at the centre bounce and got his hands to the first spillage, going to ground but managing to fire out a handball.

Andrew then managed to prove his smarts by sharking an opposition tap and booting forward a clearance, but he tended to play within a typical ruck’s limits. The bigman dished off quickly to runners when under pressure at the contest, and even in fast breaks through the corridor.

He crashed a couple of packs but could not quite hold onto his marks, though he still managed to flick a disposal out as he hit the deck on multiple occasions.

The third was arguably Andrew’s quietest, despite boasting a massive size advantage in the ruck. He featured at the first centre bounce and made use of his height, but again hit the deck on some of his follow-up attempts. Still, he was willing to get down and compete at ground level as somewhat of a fourth midfielder.

Andrew’s couple of clear moments on the ball were nice; first showing good awareness to turn quickly through two opponents when receiving in a tight spot, and next booting a kick across the defensive half to help Dandenong stretch its transition.

He had a long forward rotation and with limited looks, again did not quite have the strength to clunk each mark but stood up under high balls and managed to compete.

Andrew rounded out his game strongly by covering a good amount of ground, showing good ruck craft, and popping up for another couple of marks. He continued to move the ball on quickly and did the basics well, proving quite an efficient user for his size.

With his overhead pluck from the side at half-forward, Andrew displayed more of his athleticism and potential, before dishing off to a runner who sent the Stingrays inside 50. In his ground coverage, Andrew managed to get up and back and while he got into the defensive 50 hole, he saw a lot of the ball go right over his head.

Still, Andrew showed more of the really promising traits which have him poised so highly on draft boards at the moment, despite that evident rawness.

Somewhat of a big game player, Andrew did not quite hit the heights of some of his previous performances but still showcased the athleticism and upside which have him rising into top 10, and even top five calculations. At his best, he displayed wonderfully clean hands when directing hits, following up at stoppages, and taking big overhead marks. He also covered the ground well and had the right idea to plug a hole in defensive 50, while also dragging his opponent forward when Dandenong attacked. Once Andrew fills out, he will be able to provide an even greater focal point up forward to make full use of his reach and leap, but uses those more effectively as a ruck at this stage. Look away Demons fans, the chances of a bid coming past pick 20 are incredibly slim.