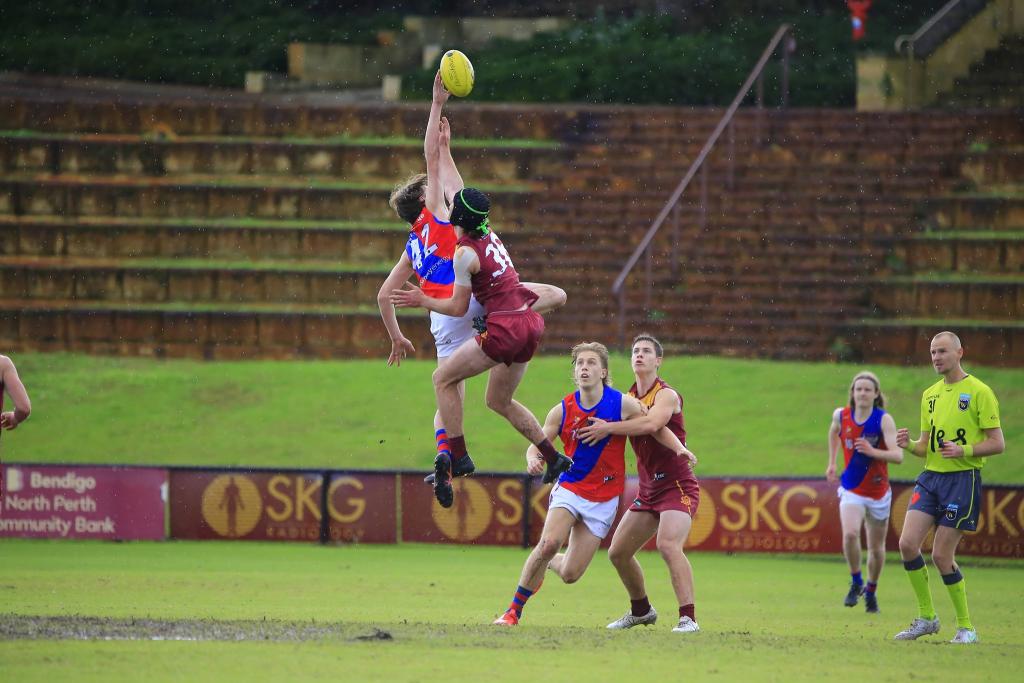 WHILE Western Australia’s state Under 19s again waxed in a trial game, the 2021 WAFL Colts season rolled on into Round 17 over the weekend. Swan Districts remains the frontrunner, but there is plenty to play out in the last few rounds ahead of finals. We recap all the action and outstanding performances in our weekly wrap, while also taking a look around the grounds at youngsters who impressed in senior grades.

Swan Districts strengthened its standing atop the WAFL Colts table and helped boot East Fremantle out of the finals places in on fell swoop, after defeating the Sharks by 58 points on the road. Held goalless until the third term, the hosts’ only two majors came during said period as they conceded six on either side of half time, making for a lop-sided 12.6 (78) to 2.8 (20) final scoreline.

Noah Hannan led all comers on the day as the only player to reach 30 disposals, supported well by the likes of Aiden Cartwright and Benjamin Hewett around the ball. Cartwright also snared a game-high three goals alongside teammate Tyrell Metcalf, who returned after consecutive Reserves outings. Sharks bigman Kobe McMillan snared both of his side’s majors, while Samuel Collins (23 disposals, eight tackles) was another to stand up in the heavy loss.

A third-consecutive victory helped West Perth jump into the top five and create a one-game buffer to the trailing pack, after the Falcons defeated Subiaco by 52 points away from home. The visitors steadily converted on five goals in each half while restricting Subiaco to just two overall, leading to a handy percentage boost in the race for finals as the Falcons won out 10.13 (73) to 2.9 (21).

Peel Thunder pulled off a dramatic upset to defeat South Fremantle by a single point, pouring on five goals to nil in the final quarter to overturn a 29-point deficit at three quarter time. The Thunder had trailed at every break too, and was behind in most key parameters before their final miraculous charge. The 11.2 (68) to 10.7 (67) upset win does nothing to change Peel’s ladder position, but sees South Fremantle draw close to dropping out of the top five.

Scott Tuia provided plenty of drive for the Thunder with 23 disposals, seven inside 50s and a goal, as Ethan Donaghy and Taj Wyburd combined for a mammoth 24 tackles. Byron Finch was also impactful, snaring three majors in the win. For the Bulldogs, midfielder Caleb Stephens continued his incredible run of form with another 32 touches and a goal, aided well by Aaron Drage (29 disposals, four inside 50s). Harry Elphick also played his part, booting a game-high four goals in red and white.

Claremont continued its winning streak and jumped East Perth with a 17-point win over the Royals on Sunday morning. The Tigers made better use of the ball and stood up in defence, keeping their opponents goalless across the first three terms to all but put the contest to bed come the final break. The Royals registered their three majors in a final term consolation effort, but it did little to eat into the low-scoring 6.6 (42) to 3.7 (25) result.

It was an even team speed for the winners, with Kendyll Blurton (26 disposals, one goal) and the returning Kieran Kavanagh (20 disposals) solid around the ball, as Samuel Gilbey and Jacquin Ciminata combined for 25 tackles, and Griffin Muir knocked down 40 hitouts. Royals midfielder Kalani Brooks was again dominant despite the loss, collecting a game-high 35 touches and laying 12 tackles. Jake Littleton and Jayden Peak also ticked up over 30 disposals, as West Coast NGA ruck Sokaa Soka notched 30 hitouts.

A couple of League debuts headlines what some of Western Australia’s best juniors were doing up the grades, with Peel Thunder talls Luke Polson and Jackson Broadbent making their maiden outings. The versatile Polson managed 10 disposals and three marks, as bottom-ager Broadbent booted a goal from his seven disposals to go with nine hitouts.

Their feats came in a loss to South Fremantle, who again fielded Fremantle NGA prospect Jesse Motlop. The exciting small forward was not as busy as in his own debut outing, but still managed to register nine touches, three marks and three tackles.

East Fremantle pair Finn Gorringe and Corey Warner are others enjoying extended runs in the top flight. They were both part of the Sharks’ seven-point win over Swan Districts, contributing nine disposals apiece as top-ager Gorringe laid five tackles. Perth’s Jack Avery was also a standout Under 19 prospect in Round 17, racking up a team-high 26 disposals and 11 marks as the Demons went down by 56 points to West Coast.