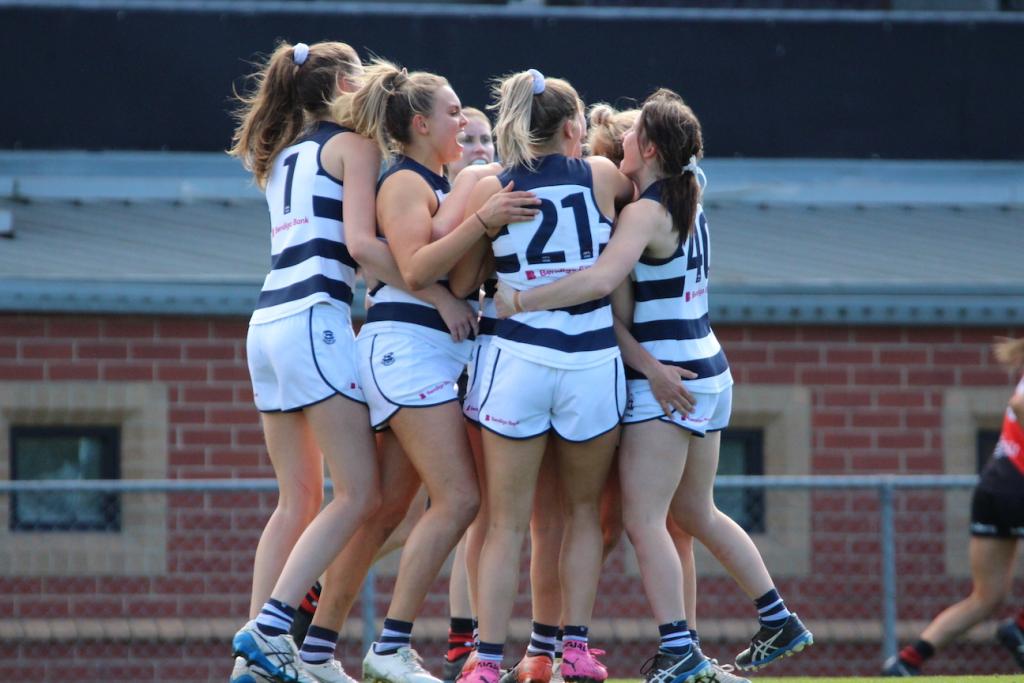 GEELONG fans have had quite the contrasting seasons when comparing the AFL Women’s 2021 campaign with its VFL Women’s counterpart. After winning just the one game – and that coming in the final round of the season against an equally winless Gold Coast Suns – the AFL Women’s side headed into the AFL Women’s Draft and Trade Period to plug holes and develop players to step up to the next season.

The VFL Women’s side was perfect platform to not only develop readymade players, but give further exposure to the Cats’ younger players only a year or two into the system. Fast forward to the end of the season, and they have not only ticked that box, but drafted three mature-age players from the program, and reached the 2021 Grand Final.

“That’s the exciting thing I think for the whole club is that you know, a lot of the first year players of AFLW have got a huge amount of experience this year,” Geelong VFL Women’s head coach Andrew Bruce said ahead of the VFLW Grand Final. “To get to play a finals series, against really good opposition, you know both teams have AFLW talent in it so going up against really good opposition and it can only benefit going forward.”

When asked what it meant for the younger players who had stepped up to AFLW level, but the season had not gone to plan, Bruce said it was great to see them getting more confidence at state league level, and the influence the likes of Darcy Moloney, Laura Gardiner, Sophie Van De Heuvel and Rene Caris had on the group was profound.

“We came in this year, and we were all about our biggest thing is development and making sure that you know, the girls are better at the end than they were at the start, and we really wanted to enjoy the experience,” Bruce said. “So that’s been a big thing for us. “Yeah, the AFLW girls didn’t get the season that they wanted. “But, you know, when they’ve been in our group, they’ve been absolutely brilliant.”

Geelong picked up ruck Olivia Fuller, and versatile talents Claudia Gunjaca and Annabel Johnson through the compensation pre-draft selections for Fuller and Gunjaca, and with its last selection in the AFL Women’s Draft in Johnson’s case. The trio entered the VFL Women’s finals series as VFLW listed players, and will run out on Grand Final Day as AFLW listed ones. For Gunjaca especially, the moment will be extra special as the acting captain of the Cats in the big match.

“Nothing has changed for them,” Bruce said. “You know, they’re super excited to get on the list and really deserving of that opportunity. All three of them have been brilliant in our group this year. “We’ve been lucky enough since the AFLW season finished to have a good connection with the AFLW team. “The three girls have been great all year and were great on the weekend and we expect the same this week.”

Bruce said the weekend’s hard-fought win over Essendon hard the Cats well placed to take on a Collingwood outfit that would have not played in 29 days since winning their semi-final over the Bombers. While Bruce said it was hard to say whether the extra game, or the extra long rest would be more beneficial, the Cats coach said he was backing in his players – just like opposing coach Chloe McMillan was for the Magpies – to get the job done.

“Yeah, we’re feeling really good,” he said. “We had one training session last Thursday. “It was probably our best session for the year. “Chloe said the same thing, which is fantastic. “And obviously the game against the Bombers on the weekend. It was nice and physical and the girls got a lot out of it. “So now we get an opportunity this week.”

The teams are ranked first and second for defence through the year, which is something that the sides have prided themselves on. Bruce said statistics meant little on game day, especially with both forward lines “dangerous” if given enough time and space. One such player in the Cats forward line is Georgia Clarke, who slotted three goals in the win over the Bombers, but came off with soreness prompting some worries. Bruce clarified she copped a knock to her back but would be right to play this weekend.

Now the challenge for Bruce is being able to turn around the three losses to the Magpies – albeit all tight contests – and make it fourth time lucky on Sunday.

“I think our last game in that very first final we had a really good game,” Bruce said. “We’re really confident that our best football, is very close to Collingwood’s best football and l think it will be a really tight game.”