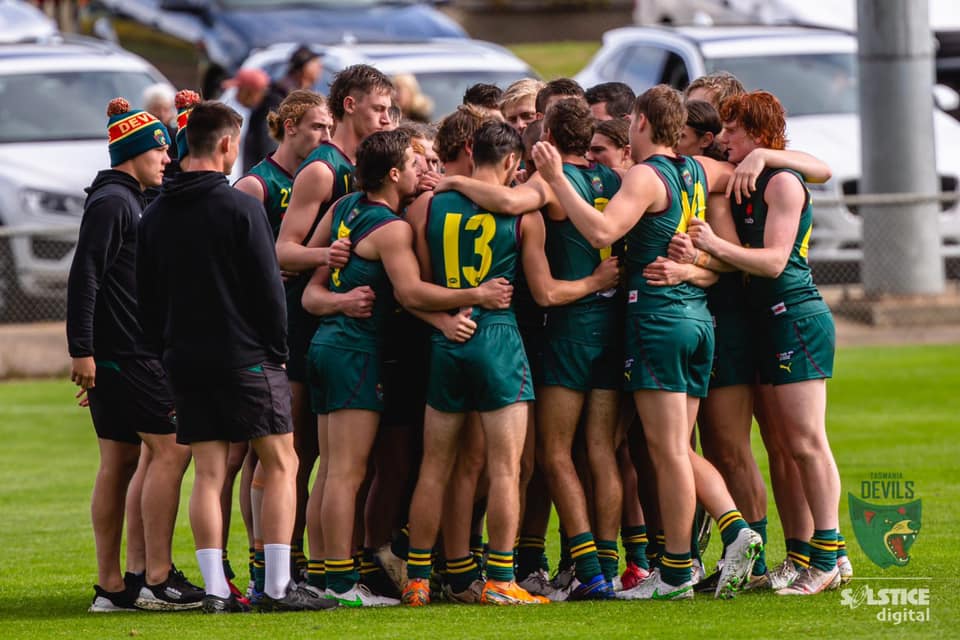 JYE Menzie booted six goals as the Tasmania Devils U19s proved too good for their younger counterparts in Sunday’s intraclub match. The younger U17s side fought on valiantly the whole game but were not quite good enough as the U19s won by 62 points at Twin Ovals in Kingston.

Early in the game Will Splann was dominant playing as a forward, leading up at the ball carrier and laying big tackles as he kicked the first two goals of the match. Oliver Sanders delivered beautifully to Splann for the first goal and that got the U19s off to a great start. Shortly after, Baynen Lowe made it three straight inside 10 minutes, but the U17s found a bit of momentum on the back of Arie Schoenmaker’s major as they got it to three goals apiece, before a couple late ones to the U19s led them to a 5.1 (31) to 3.1 (19) quarter time score.

Darcy Gardner (U19s) and Ryley Sanders (U17s) were dominant in the middle all game, and they both continued to win plenty of footy as Splann continued to show his marking prowess. The little extra size and experience of the U19s outfit began to show in the second term with Menzie and Splann adding two goals each to the scoreboard. Lachlan Cowan sparked a great bit of play for the U17s after taking a strong intercept mark in defensive 50, he switched the play quickly to result in Tom McCallum kicking a long goal from outside 50. That goal was their only one for the term however, as the U19s led at the main break by 36 points.

The second half begun with Splann sent down into defence, allowing Baker Smith to show his talent in the attacking 50. Gardner continued to win the ball, with Menzie and George McLeod both getting involved. Braidy Simpson was good off half back for the U17s and Liam Jones was doing his best in the middle along with Ryley Sanders. Sam Banks-Smith also begun to see a bit of the footy in a good little patch for the U17s in the middle of the third term, however they failed to capitalise on their opportunities and time inside forward-50 only managing to register three behinds for the quarter. The same couldn’t be said for the U19s though, with Menzie kicking two more goals in the term, making sure they made the most of their chances going forward.

McLeod kicked the first goal of the last quarter to add to his great game, with Cowan having an impressive final term pushing across half back and into the middle. McCallum added his second goal of the game, but the U17s were just hanging in there with the U19s asserting themselves over the younger team. A seven-goal final term, split four goals to three in favour of the U19s, led to a final score of 17.10 (112) to 7.8 (50) to end what was a great spectacle for Tasmanian footy fans, with plenty of young talent to be excited about.