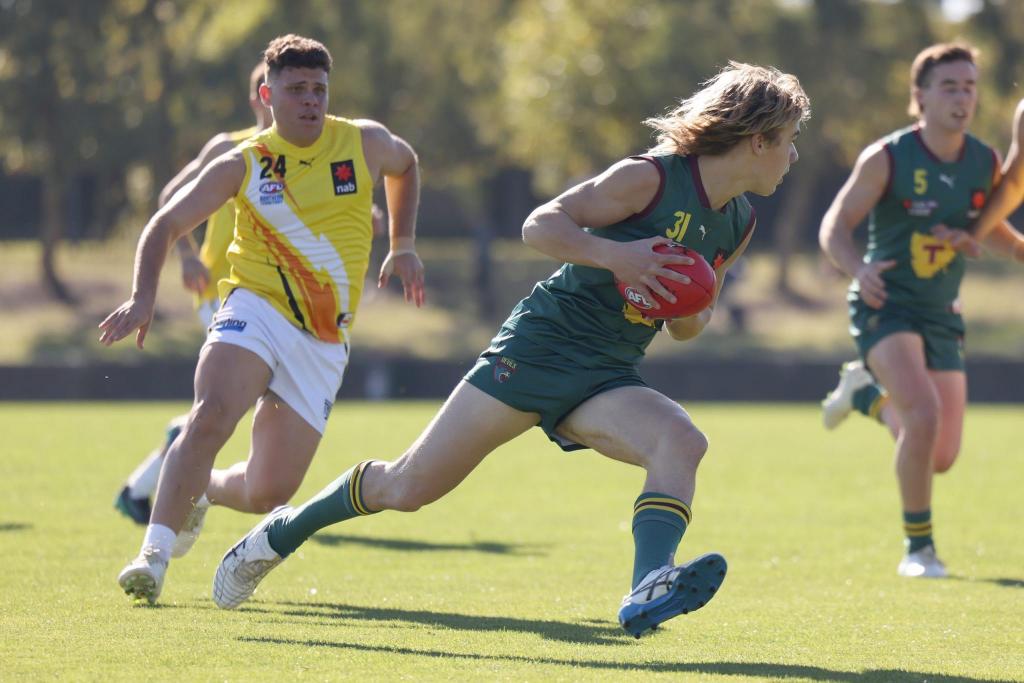 WITH the AFL Under 19 Championships postponed, the Tasmania Devils top talents took to the field in an Intraclub game between the Under 19s and Under 17s squads. Whilst the Under 19s got the job done by 52 points, both sides had some impressive performers and we took note of how some of them played in that match. All notes are the opinion of the author.

Simpson is a classy player plying his trade mostly across half-back during the game, and while the ball sailed over his head plenty of times, he certainly showed glimpses of talent, competing well in one-on-one battles, and remaining composed under pressure. He used the ball well in the back half and was not afraid to get down and dirty in contested situations. Simpson also took a few kick outs, highlighting his ball use as a key trait in his game. The soon to be 17-year-old from Glenorchy has played three games in the NAB League so far this season and will be looking for more chances next season.

One of the youngest member of the Devils’ NAB League squad at just 16 years of age, and he had a super game on Sunday. Playing predominantly as an inside midfielder, Sanders was ferocious with his attack on the footy, winning plenty of the ball and using it well on most occasions. He accumulates the footy in multiple ways, he can get in and under the packs and win a contested ball, but he also possesses the ability to break lines and create play for his teammates. He was a standout player in the U17’s squad on Sunday, backing up what has been a great NAB league season, averaging 16 disposals and over four marks and four tackles per game. Standing at 184cm and weighing 76kg, Sanders is already a good-sized midfielder and a couple more years of development could see him turn into a strong player.

Cowan was another player who performed well in the intraclub clash, providing plenty of eye-catching moments throughout the match. He is 186cm tall, but it would come as a surprise to many given his ability to play taller. He worked off half back and through the guts, showing some great attributes like intercept marking, line breaking speed and clever ball use. He has a penetrating kick, on show with some of his kick outs from defence, and always works hard up and down the ground. Cowan showed an ability to perform as both an attacking player and defensive player across the ground and has the skillset to play multiple roles across the field. He was most impressive on half back however, intercepting and turning that defence into attack.

The 191cm forward kicked two goals out of the teams seven on the day, with a couple other chances to add to that tally. McCallum is agile and presents well right across the ground, from being an option coming out of defence to a good deep forward target. He uses his body well to outmuscle opponents in contested situations and has strong hands. What makes him a better player is his additional running ability, he’s got a good step and can put a couple quick meters on opponents when he leads. He finished off a great bit of play in the middle of the second term when he crumbed the ball on the wing, outran his opponent, evaded a tackle, and then kicked a goal from inside the centre square.

Lowe is an energetic midfielder/small forward who works hard all over the ground. He is only 176cm tall but has a tireless work rate and he is always having a crack. His efforts were highlighted right from the start of the game when he worked hard to apply the forward pressure, tackled, and won a free kick, before finishing off superbly by kicking a goal from 40m out on the boundary. Not only is he capable of winning plenty of the footy as shown in his NAB League efforts this season, where he averages 25 disposals per game, but he also works hard defensively to pressure opposition players. He is smart and clean with ball in hand and can make things happen for teammates.

Gardner had a great game in the intraclub clash, racking up heaps of the footy playing predominantly through the middle, and spending some time forward. He is a hard-nosed midfielder who attacks every contest with intent. He is not a massive player by any means, but he uses his body well to break tackles and win the footy on the inside. Gardner also tackles hard and can stand up against bigger opponents. He has been averaging 16.5 disposals and just under six tackles at NAB League level, highlighted by a 27-disposal effort in round five against the Thunder. He showcased his ability on Sunday and can certainly have a big impact on games, getting the ball moving out of the centre.

The boy from North Hobart had a field day, kicking six goals and finding the footy across the ground. He has a bit of x-factor about him, and he makes things happen with the ball in his hands. He’s got excellent skills and is a smart finisher around the big sticks. He kicked a nice goal in the third quarter after he intercepted the ball and got it onto a teammate, he then followed up and put in a strong second effort to tackle when the ball was lost, before it was won back, and he received a handball to kick a snapped goal. Another element of Menzie’s game is his speed, with the ability to burst away from packs. He’s been averaging 15 touches and has kicked 12 goals in the NAB League this season.

Splann was the dominant force on the ground in the first half. He played forward and was taking strong marks in one-on-ones and leading up well at the ball carrier. He bagged the first two goals of the game, including his second one which was impressive, he laid a big tackle and was rewarded with the free kick, then he finished off his good work. His efforts were rewarded again in the second term, taking some nice marks, and adding another two majors to his name. In the second half, Splann was sent into defence, showing his versatility as a big man. He looked right at home too, winning a couple of big contests against his opponents, remaining composed, and using his strength and footy smarts. He kicked three goals and had six marks against the Bushrangers in round 12. He is an exciting prospect at 195cm, with his ability to perform at either end.