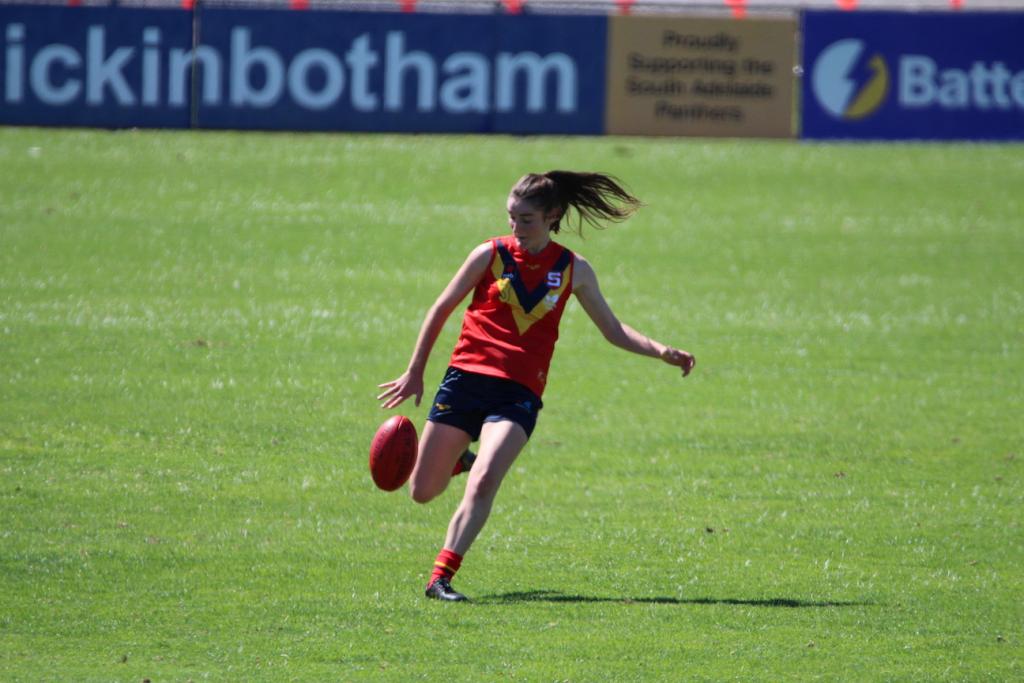 NORTH Adelaide’s Kate Case is a self-proclaimed hard worker and defensively-minded talent who can play across multiple lines. Now the versatile utility admits to take her game to the next level, she will need to learn to back herself more often and even put out a ‘don’t argue’ or two in the process.

“I think something I’m really looking to improve on is to try and take the game on a bit more,” Case said. “I think I have potential to be able to get the ball and run a bit more, but I have to build the confidence to take it on and maybe do a fend-off, and then maybe pinpointing kicks and things like that.”

Case’s football journey “started a while ago” when she was much younger, but the 18-year-old also teamed up her football with netball and it was not until a chance opportunity at school that the South Australian took the first steps towards making the State team.

“I did a bit of Auskick but then I started netball quite young instead and played for a while and then my high school PE teacher suggested that I tryout for Under 15s State Football and I luckily enough got in,” Case said. “So my first ever real game of football was the Under 15s State game. “Just went through and played the underage SANFL which led to trying out for the women’s and went into those seasons and it’s all sort of got to here now.”

Representing South Australia at the AFL Women’s Under 19 Championships, Case averaged 10.3 disposals and 4.3 marks, working hard up and down the ground to provide an option in transition.

Case said she felt more comfortable in herself and her role within the reigning premiers side, though her areas of improvement were strong on her mind. She credits coach Krissie Steen with her development of late, saying “she really inspires me to be a better footballer and a better person”. As for her role on field, Case loves the open space of the wing.

“I like wing, it’s my favourite position, it’s a lot of gut running and unrewarded running but I still enjoy that,” she said. “Backline, I like pressure acts and things like that over a forward, so I think really supporting teammates whether it’s through gut running or getting there to put a block on or pressure acts.”

It is no surprise that Case enjoys playing an aggressive brand of football and said she likes to model her improvement on a Crows star for not only what she does with the ball, but without it too.

“I think a player I really look up to and enjoy watching is Chelsea Randall because that’s with the pressure and so courageous, puts her body on the line, gets to every contest and works really, really hard. I want to base my game on the work rate and courageousness,” Case said.

Right now juggling a football career, Case has plenty on her plate between studying and looking to join the army.

“I’m at uni currently, I’m hoping to become a physiotherapist,” Case said. “Footy is pretty busy so I’m just doing that, and applied for the Army Reserves and hoping to get into that. Just working and footy, just pushing along.”