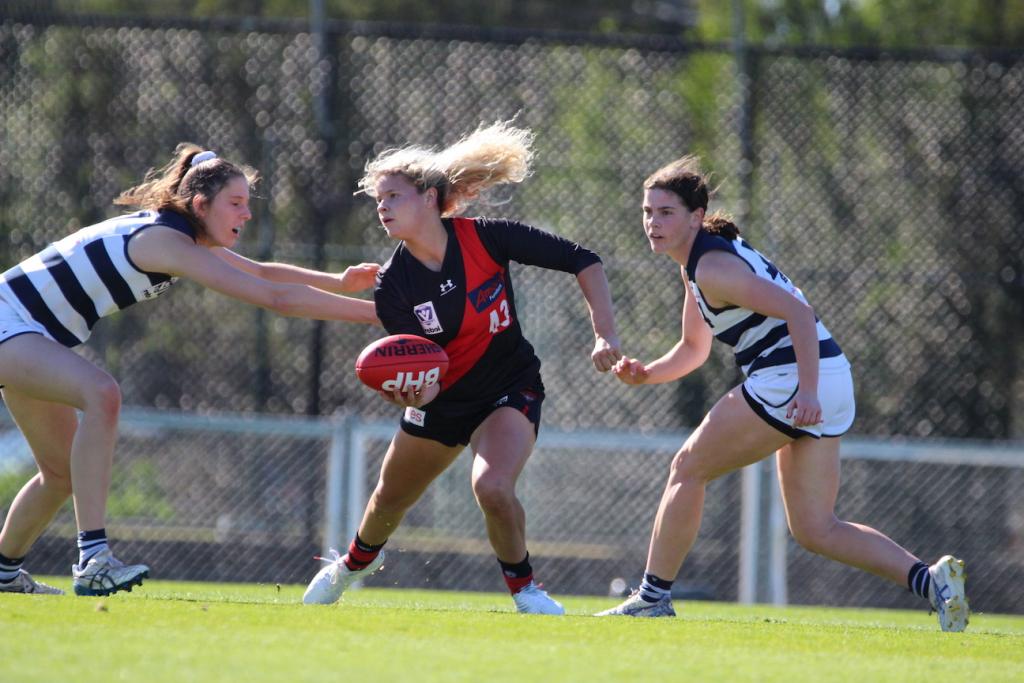 GEELONG advanced through to the 2021 Victorian Football League (VFL) Women’s Grand Final with an impressive victory over Essendon in the preliminary final. In that game, there were seven recently drafted players who will step up to AFL Women’s level next season and we took a look at how they performed. All notes are the opinion of the writer.

The towering ruck/forward predominantly provided a target inside 50, and then rotated through the ruck with Simone Nalder. On a number of occasions, Gillard showed her height through a one-on-one marking contest, able to stand over her opponents and pull down marks by snatching it over the top. She had a couple of shots from those marks inside 50, for one behind and one falling short. There was a moment she would probably like to forget where she dropped a chest mark inside defensive 50 which resulted in a tackle, subsequent throw against, set shot and goal in the third term, but Gillard kept pushing hard throughout the four quarters.

Was a predominant handballer given a lack of space in the hot finals atmosphere, she showed good strength in the second term to rip the ball from a contest close to the line and show quick hands to dish it off well. She earned a free kick from Darcy Moloney in midfield at one stage to begin a team move in transition and set up a scoring chance in that quarter for Alana Barba to kick a behind.

One of the best on the ground, and gave Cats fans some bittersweet feelings. Along with Georgia Nanscawen and Ruby Svarc, Prespakis was the key resistance for the Cats, racking up game-highs in tackles (12), clearances (seven) and inside 50s (four) to not only win it at the coalface, but drive it forward for goal-scoring opportunities. When the Bombers needed a response late in the first term, Prespakis was the one to give it with a clever snap around her body to get her side on the board. Her fierce tackling was a standout of her game, and she was able to move through clearances well, extracting it out and down the field for her teammates on the outside.

Played forward and worked really hard, but once again was not in her most dominant position – onball. One passage of play which showcased Friswell’s athleticism was her gut running through the middle in the second term, and put it long inside 50 for Barba to run onto and kick the Bombers’ second goal. Whilst not able to hold some of her marking opportunities, Friswell kept presenting, though did only finish with the four touches in what was a tough day for Bomber forwards.

The standout ruck on the ground amassing 35 hitouts, but it was Fuller’s spread around the field that caught the eye. She was strong overhead and was able to provide a target at both half-forward and half-back, taking a strong intercept mark early in the match and pumping it forward. At ground level, Fuller laid a number of strong tackles to be a dominant defensive player.

After a slower start, Johnson got busier as the game progressed and found more of the ball around the ground. Aside from a rushed kick – after a nice spin out of trouble – on the wing which went out of bounds, Johnson hit the scoreboard with a monster goal from just inside 50. It was a terrific set shot and ignited her game and her second half was quite productive. Johnson was neat with ball-in-hand off half-back and then even did the defensive running well, marking on the goal line to stop a Barba snap from going through.

An eye-catching performance and one of the Cats’ best on the day, Gunjaca started forward and was strong with her leading and aggressive at the ball carrier. Her aerial work matched her ground intensity, and she picked up a fair amount of disposals (19), marks (four) and tackles (five), and most importantly, was able to put plenty of passes inside 50 (six). She was great at reading the ball in flight, taking back-to-back intercept marks at half-forward in the first term. On a couple of occasions, Gunjaca also spun out of trouble to kick the ball forward and moved well in traffic.