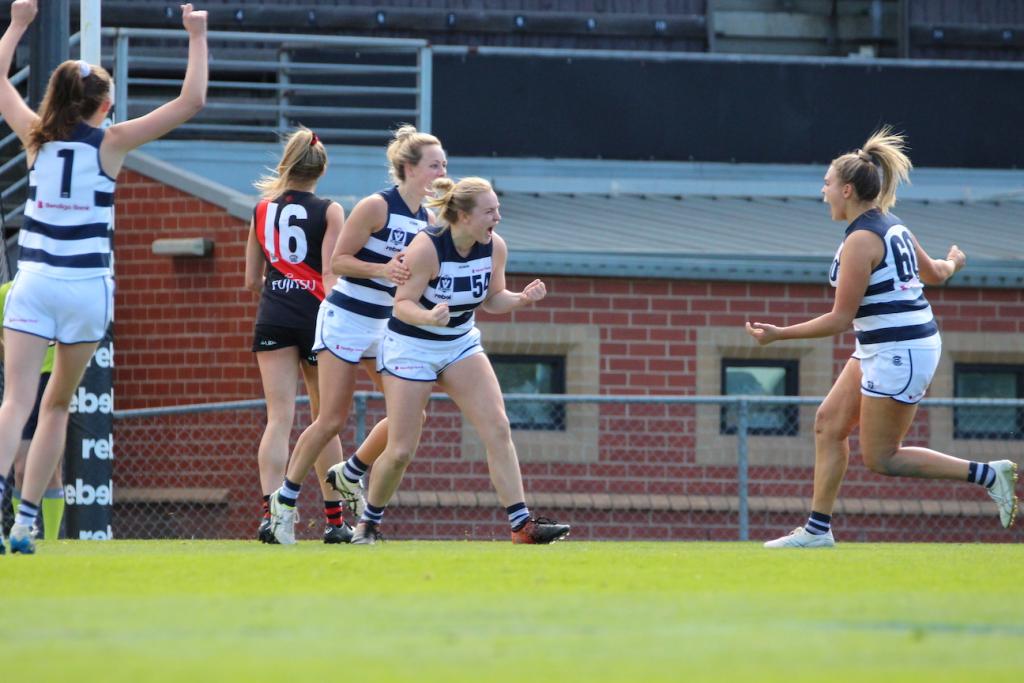 IT took until the final quarter, but Geelong booked its redemption battle with Collingwood in the 2021 Victorian Football League (VFL) Women’s Grand Final, following a terrific 6.9 (45) to 2.5 (17) win over Essendon. The teams were neck-and-neck for the first half, but the Cats shook off their opponents after the main break, booting 4.7 to 0.3, including two last quarter majors to Renee Tierney to earn their spot in the decider.

The first quarter was mostly played on Geelong’s terms, having plenty of chances early, but the staunch Essendon defence did well to hold them up. Georgia Clarke had the best chance of the quarter with a good lead and mark out in front, converting the set shot with the breeze blowing left to right into her. A couple of more chances went begging, and up the other end, Tahlia Gillard had her opportunity with a strong mark pinching it from a Geelong defender inside 50. Her kicked sprayed wide for just a behind, but soon the momentum with the Bombers was going to be rewarded.

New Cat still in the red and black, Georgie Prespakis sunk an early dagger into her soon-to-be teammates’ hearts with a clever snap out of traffic from a forward stoppage, to give Essendon reward for effort and a late reprieve. Kicking into the breeze, it was relief for the Bombers to get one on the board and keep within a point at quarter time.

The second term was yet again neck-and-neck with Clarke being the target inside 50 and kicking her second cleverly to give her side the seven-point lead. Essendon had more of the play with the breeze, but the Geelong defence was up to the task. That was until in transition, Zali Friswell – another soon-to-be Cat – won it in midfield and put it into the path of Alana Barba, and, after sidestepping her opponent close to the line put it on the outside of the boot and snapped it home.

Trying a similar thing in the dying moments of the half, Barba was run down and the shot went astray for one behind, but the sides were level heading into the main break. Georgia Nanscawen suffered leather poisoning in the first half, proving everywhere with a massive 19 disposals and six tackles, unrelenting on the inside. She teamed up well with Prespakis (12 disposals, nine tackles), whilst Rebecca Webster (15 disposals), Darcy Moloney (11) and Sophie Van De Heuvel (11) were showing their AFLW experience.

Geelong had an early opportunity from the first clearance, with Clarke almost getting her third, but she was cleverly dragged down on the line by Tamsin Crook for a rushed behind. Forward pressure soon proved overwhelming however, as recently drafted Cat Annabel Johnson took a mark and then went back from long-range and slammed a massive goal home – both in distance and in the context of the game, to give the Cats another seven-point lead.

Geelong had stepped it up in the premiership quarter and a kick inboard to a dangerous spot looked to be covered by Gillard but the ball slipped from her hands and soon the tall was called for throwing it as she mobbed, handing Clarke with a chance of her third. She made no mistake and put it straight through the middle for the largest margin of the game. No sooner had the goal been put in the book and Clarke was having another shot on goal, this time from a tight angle. This time however it proved too great, pulled a bit tight and just one behind.

It was Essendon’s chance to have chances with Jessie Davies having a shot but floating off the side of the boot. Barba was again dangerous, sidestepping and snapping towards goal but it was Johnson playing the role of goalkeeper on the line that saved the day. She played on before the line for it to be deemed a rushed behind, and yet another Barba snap just missed, but the Bombers were lively. Unfortunately for the home team, the time would beat them, and the deficit was 11 points at the final break.

It was tight and contested to start the fourth, that was until a Tamara Smith kick inside bounced to Tierney’s advantage and the teenager swung around and slammed it home for a game-high 17-point lead early in the term. Essendon were desperate to atone and Natalie Macdonald won a free kick for being held close to goal. Her set shot was on target but marked on the line by Maddy Boyd in a goal-saving effort. The Cats ran it down the other end as Madisen Maguire had a chance to win the game, but it just went to the side but put it to a flat three straight kicks.

The intensity had lifted and the pace of the game was red hot, with pinball like footy from end to end as both sides were willing to open the game up and try and take it on. Geelong had the 18-point advantage though, and every minute off the clock was a minute closer to victory. Smith was proving vital around clearances, getting multiple thrusts forward. Geelong was starting to win the territory battle however, and with another behind meaning the Bombers needed four straight kicks to victory, the game looked done and dusted.

The frustration was starting to show on the Bombers’ faces and a 50m penalty was given away after Ruby Svarc tried to charge forward but was brought down well. The subsequent set shot from the Cats went to the right, but meant the Bombers would need the four goals to win. Tierney almost had a second goal in the last quarter but the ball beat her to the line for one behind. Then her moment came again and a terrific snap out of trouble from Tierney put the game beyond doubt with her second successive goal and the Cats were headed to a grand final.

Webster finished with a match-high 29 disposals, three marks and two tackles, leading teammates Van De Heuvel (20) and Gunjaca (19), while Nanscawen recorded 26, as well as 10 tackles, with Prespakis (17 and 11) and Barba (18 disposals, five tackles, 1.2) also among the more impressive players for the red and black.