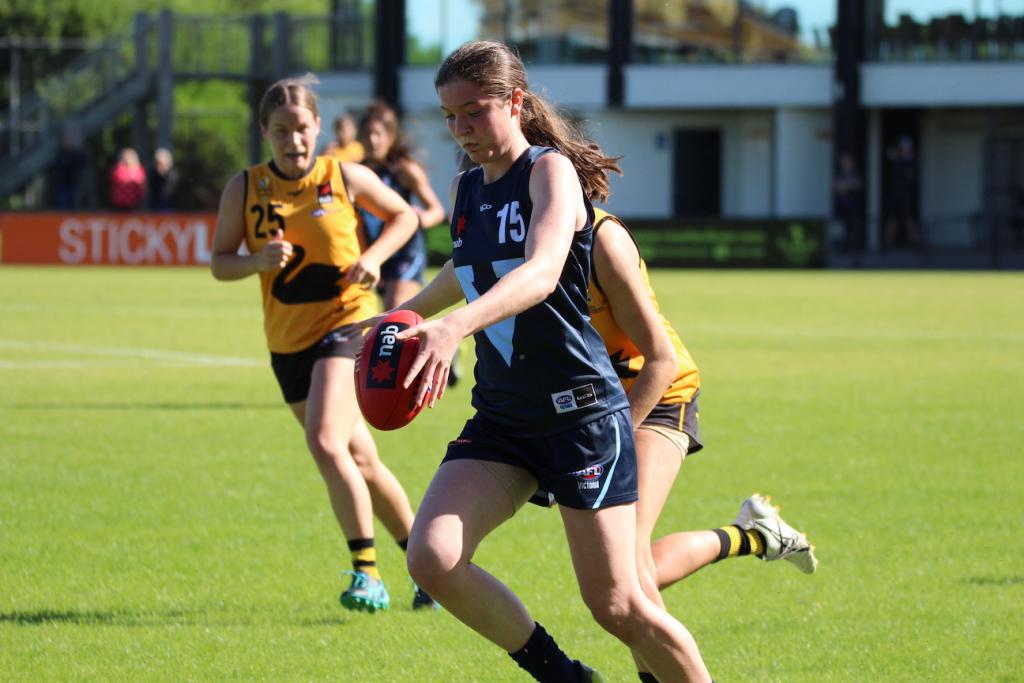 NOW the AFL Women’s Draft is done and dusted, Draft Central will review each club’s draft hand, and provide supporters with all the content they need to know about the latest additions to their AFL Women’s programs. We continue the club-by-club reviews with Richmond.

One of the best and most consistent players of this year’s NAB League season, Reid was snapped up by Richmond with pick five. The Oakleigh Chargers premiership player is a utility of sorts; having started out the season at half-back, before spending time on both sides of midfield and eventually capping it off with some fantastic performances up forward. In every third of the ground, Reid proved a natural ball winner who could find it at a good rate and provide line-breaking drive on the outer. Her carry and penetrative kick suit the outside midfielder mould well, but Reid is also a handy marking target up forward at 173cm and finds ways to craft shots on goal out of congestion. The Tigers may employ her as a ‘fix-it’ type of player depending on what the team requires, and have a very versatile talent on their hands – not to mention elite.

At 160cm, Yassir may be small but truly packs a punch. The Calder Cannons graduate was a teammate of Reid at Vic Metro and together, the pair add some nice depth to Richmond’s midfield rotation. Yassir has long been one of the top Victorian ball winners and is exceptional with her mix of grit and class at ground level. She cracks in at the coalface and comes away with a zippy turn of speed, while also remaining relevant defensively. Her size and tackling game could see her be developed as a pressure forward before transitioning into midfield, but Yassir is a class act in there and should be sound fold for the likes of Monique Conti, Ellie McKenzie, and the Hosking twins for years to come.

If North Melbourne didn’t pounce, another team would and that was exactly what Richmond did by selecting VFLW standout Meagan Kiely at pick 48. The 26-year-old proved one of the best state leaguers going around in 2021 and offers a readymade option for the Tigers’ midfield mix. Kiely’s inside game and work-rate should allow some of her new side’s more flashy midfielders to be released, aiding their ball winning cause in the face of tags and heavy opposition attention. Having lead the VFLW for disposals, kicks, and marks during the regular season, her dominance was simply undeniable. A few of her new teammates would know all about her talent too, given Kiely had 34 disposals and seven marks in her second-last VFLW outing this year – against Richmond’s VFLW affiliate, Port Melbourne.

After three Geelong Falcons graduates were taken in the first round, Houtsma became the fourth at pick 50. The 176cm utility can play on each line, but found a home on the wing for large parts of this year’s NAB League season. She is a prospect with high upside and while she may not accumulate the numbers others might, has an impact with each disposal and boasts a promising athletic profile. Houtsma could offer spurts of play similar to current wing revelation Tessa Lavey given said athleticism and aerial ability, but has all the versatility and room for development to be moulded into a player who suits whatever Richmond may need.

With a couple of early and late picks, Richmond brought in a quartet of fresh faces who provide great depth and versatility not only to the midfield, but potentially all around the ground. Reid was arguably a best available selection at pick five and while Yassir was arguably the same at pick 16, also suited the Tigers’ need for some midfield support. Kiely adds to that as one of the prime mature-agers nationwide, while Houtsma is a high-value late choice who could develop strongly in an elite system. Richmond also re-drafted defender Akec Makur Chuot with their final pick (54) after delisting her at the end of last season.