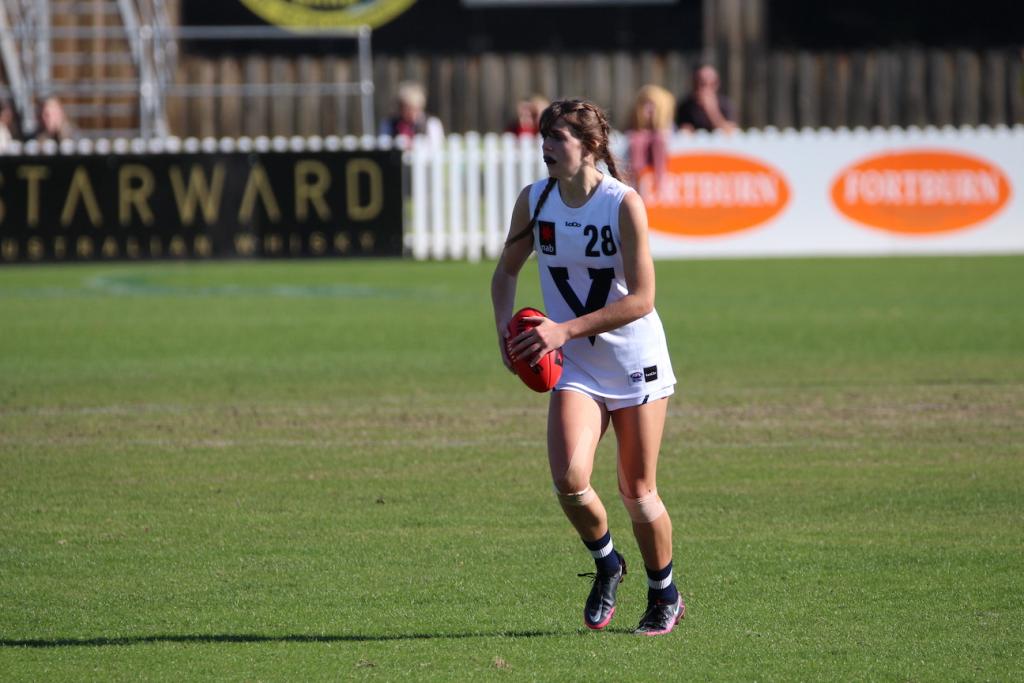 NOW the AFL Women’s Draft is done and dusted, Draft Central will review each club’s draft hand, and provide supporters with all the content they need to know about the latest additions to their AFL Women’s programs. We continue the club-by-club reviews with North Melbourne.

A huge bolter this year in her draft-eligible season, Craven became one of the premier inside midfielders in the NAB League Girls competition. Winning the hard ball then using her high work rate to get to the outside and have an impact going forward in transition, Craven put together plenty of four-quarter performances. She won Geelong Falcons’ best and fairest for the season in a Grand Final team, and was touted to go as high as inside the Top 5 at one stage. Clean with her hands and able to distribute inside 50, Craven is not afraid to get her hands dirty and will be a player who can immediately step up at AFLW level.

>> Draft Central Player of the Week: NAB League Girls – Round 6

In one of the steals of the draft, Bendigo Pioneers’ Slender made her way to the Roos with the first pick in the second round. A tall utility who after dominating as a key defender in past years, went forward to be a leading target in 2021, and even spent time through the midfield amassing one game of 27 disposals against top Victorian pick Georgie Prespakis. Her strong hands in the air and ability to lay fierce tackles at ground level make her the all-round performer, and captaining the Bendigo Pioneers this season, Slender has leadership traits that will help her adapt to the top level going forward in whatever role the Roos choose to play her in.

The Kangaroos made their intentions of picking up Rennie very clear during trade week, and whilst it did not eventuate, they got their ruck in the second round of the AFLW Draft. A 182cm readymade prospect who played four seasons at the Western Bulldogs – 18 games – Rennie was knocked down the pecking order in 2021 by Celine Moody, and therefore looked for more opportunities. With Emma King playing forward and Kate Gillespie-Jones moved on, Rennie’s change to Arden Street gives her a great chance at taking over that role. In the VFLW season, Rennie booted four goals in five games as a forward to showcase her ability there and rotate with King if need be.

In a surprise to no one, King became the first Tasmanian taken in the AFLW Draft, selected at Pick 43 by North Melbourne, continuing the link between the roos and the Apple Isle. A balanced midifelder who can win the hard ball or spread to the outside and use her running capacity, King has a perfect blend of offensive and defensive traits. She will burst out of a stoppage and burn off an opponent, or go forward and hit the scoreboard or set up teammates. As one who has already tasted VFLW experience, expect her to be not too far off an AFLW debut with the work the AFLW Academy member has already put in.

The ex-Gippsland Power tall is an inspirational story of resilience in terms of not being drafted at first opportunity, but plugging away in the VFLW and working on her deficiencies to become one of the premier defenders in the state league competition. Not only did Ferguson provide consistency to help the Magpies remain undefeated and stingy in defence, but she showed some offensive capabilities too, attracting the eyes of North Melbourne to the point where they called her up to the AFLW program. Whilst Ferguson still has the chance to win a VFLW premiership in the black and white, she will be a readymade option in the back 50 to replace Gillespie-Jones who could play in that role too.

A top-ager who missed out on being drafted last year, Maurer took her game to another level in 2021, tripling her output in terms of disposals (5.0 to 16.8) and then going to another level again for the Allies at the AFLW Under 19 Championships. Maurer averaged the 18 disposals and six tackles, as well as three clearances for the Allies, becoming a really impressive and consistent midfielder across multiple teams. In two games with North’s VFLW program, Maurer looked comfortable at the level, ticking the final box required of her to decide to call out her name with the Roos’ final pick in the AFL Women’s Draft.

North Melbourne produced some of the greatest steals in the AFLW Draft, whilst picking up readymade talent to further bolster its stocks for the 2022 AFL Women’s season. The trio of Craven, Slender and King were all taken under value, and were considered Top 10 players in our AFLW Draft Power Rankings. The Roos will be ecstatic to bring them on, as well as tall options Rennie and Ferguson who can provide an immediate boost, as well as another Tasmanian and big improver in Maurer. Overall, the Roos could be considered one of the biggest winners in this year’s draft without a doubt.