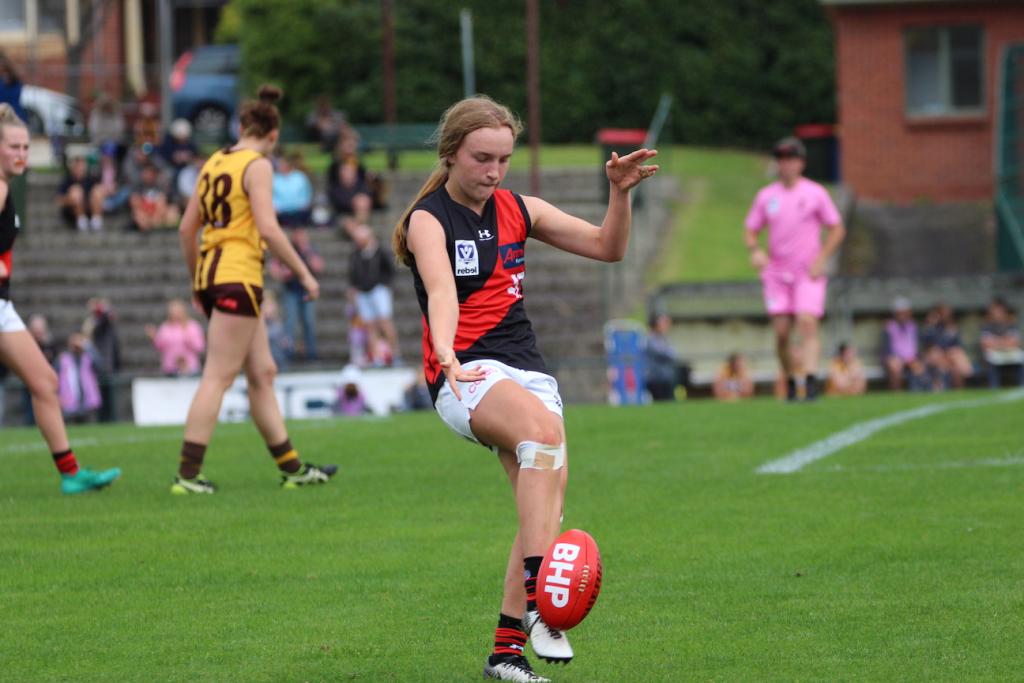 A GRAND Final spot is on the line tomorrow when Essendon hosts Geelong at Windy Hill in the 2021 Victorian Football League (VFL) Women’s preliminary final. Collingwood awaits the winner in the grand final, and has been waiting for a few weeks now after a fortnight out of football due to the Victorian lockdown. It has meant the AFL Women’s Draft has come and gone, and put a number of players in an unusual situation of playing against the team they have been drafted to for the 2022 AFL Women’s season.

In the preliminary final we find the second placed Cats having to travel to the fifth placed Bombers as part of a quirk in the unusual VFL Women’s finals series. Geelong lost to Collingwood in the quarter finals, as Essendon upset Casey Demons, unlocking a double-chance for the Bombers who had to use it when they also fell to the unbeaten Magpies. Meanwhile Geelong kept its hopes alive by taking down Southern Saints in the do-or-die semi-final, but now head north to Windy Hill where they look to get another crack at Collingwood in the 2021 VFLW Grand Final.

In a four-quarter performance, Geelong kicked away at Deakin University to draw or win every quarter against the Bombers. Sophie Van De Heuvel and Richelle Cranston booted two goals apiece as the Cats kept Essendon goalless in the first half, and then extended their 15-point final break lead to a 23-point full-time margin. Claudia Gunjaca and Rene Caris were deemed the best for the Cats, whilst Alex Morcom, Eloise Ashley-Cooper and Alana Barba, the latter of whom kicked one of the Bombers’ two goals, were among the best for the red and black.

Who are the AFL Women’s draftees?

The two with the strangest circumstance will be Top 10 picks, Georgie Prespakis and Zali Friswell. Both Calder Cannons products, playing for a team after being drafted by another was always going to be strange enough, but the fact the two Essendon VFLW talents are lining up against the Cats – the team they will play for next year – adds an extra unusual dimension to the mix. Prespakis has been named in Essendon’s ominous midfield, while Friswell has been named at half-forward.

Tahlia Gillard is also running around in the red and black after being picked up by Melbourne, while Richmond’s Emelia Yassir is also playing for the Bombers. Both will be expected to rotate through the forward line, with Gillard chopping out in the ruck. For the Cats, it is a little more straight forward, with Olivia Fuller and Gunjaca picked up prior to the AFL Women’s Draft as compensation selections, and Annabel Johnson drafted with Pick 15, the Cats’ last selection in the draft.

Essendon also has Elizabeth Snell (Western Bulldogs) on its list, but Snell has been named as an emergency, whilst Tara Slender (North Melbourne) was not selected. Similarly for the Cats, Annie Lee (Carlton) was not picked for the clash, but other draft hopefuls who unfortunately missed out on being picked up in Renee Tierney and Chloe Leonard (both Vic Country representatives) will don the blue and white hoops. For the Bombers, Vic Metro representative Kasey Lennox is another Calder Cannon named in the side.

Where will the game be won?

Both sides have star-studded midfields, with Georgia Nanscawen arguably the best player not on an AFL Women’s list, teaming up with top Victorian pick Prespakis, and fellow AFLW experienced talent Ruby Svarc. Barba rolls through the onball group. with Courtney Ugle providing some pace, and Ashley-Cooper another prominent player in there.

For the Cats, they have an AFL Women’s midfield, with Van de Heuvel, Darcy Moloney and Rebecca Webster roving to the recently upgraded Fuller. Add in Laura Gardiner off the bench, and the likes of Tamara Smith who can roll through there, and both sides have some serious talent to win around the stoppages.

Geelong deserve to be favourites, they finished higher, took control in the last game and have enough AFLW experience to hold the Bombers at bay. But the Essendon midfield is as good as a VFLW midfield gets, and the youth around the ground more than makes up for it. The Cats have more AFLW experience, particularly inside 50, but the Bombers share the goals around and no doubt Mia-Rae Clifford is a player who will be keen to impact the scoreboard for the red and black against her former side.