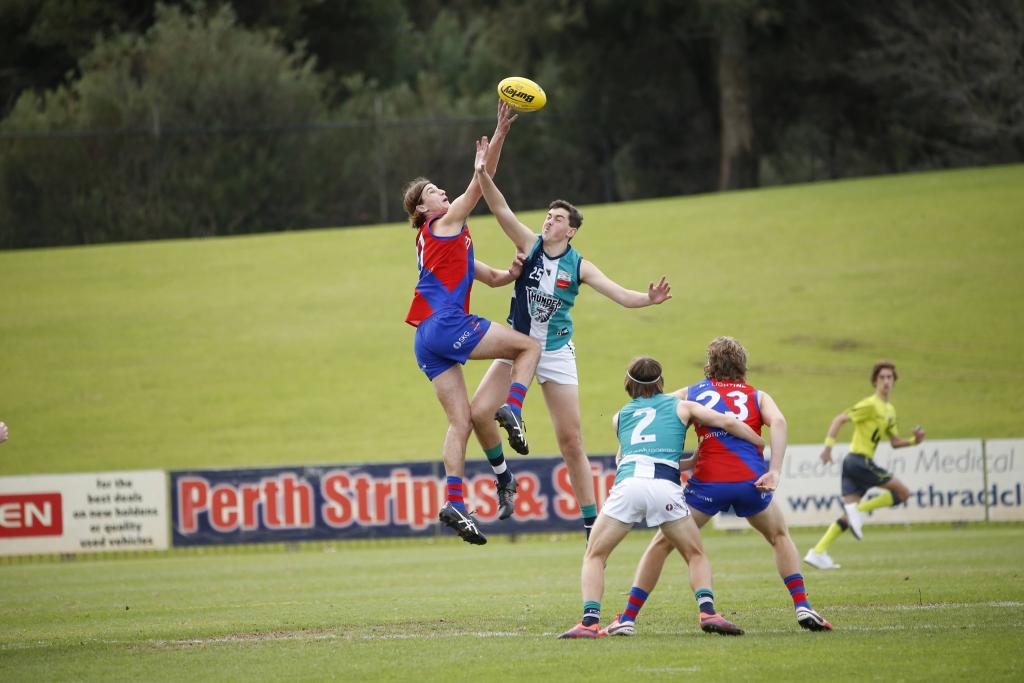 STATE Under 17 talent returned to the WAFL Colts competition in Round 16, contributing to four enthralling fixtures which shook up the race for finals. Three sides are now tied on five wins as they vie for the all-important fifth spot with under a month of regular season action left to play out. Swan Districts remains the team to beat after another impressive victory, while East Perth had the bye, though a select Royals team took on the state’s Under 19 side.

We recap all the action and outstanding performances in our weekly wrap, while also taking a look around the grounds at youngsters who impressed in senior grades.

Swan Districts continues to soar atop the WAFL Colts ladder after securing its 10th win of the season, downing Perth by 79 points in a top-versus-bottom clash. The Swans led by just eight points at half time, but kicked away with 11 majors thereafter while keeping the Demons scoreless.

Swans dominated possession with a total 326 disposals to Perth’s 182, headlined by ball winners Ben Hewett and Noah Hannah (both 32 disposals and one goal). Darcy Jones and Elijah Hewett were others to stand up in the win, while Braydon Fawcett and Ethyn Kane both booted a game-high three majors. Ben Weymouth was the lone Demon to tick up over 20 touches with his 23 and 17 tackles, but his side was comfortably outplayed in the second half.

West Perth continued its ascent back towards the top five with a 15-point win over Peel Thunder, meaning they head the trailing pack in what is becoming a hotly contested finals race. In a tight affair, the final margin was the largest of any break, with the Falcons made to overturn an eight-point deficit at three quarter time.

Claremont remains in the hunt for top spot after continuing its winning streak via a 15-point triumph over East Fremantle. In what was the only meeting between two top five sides for the weekend, the Tigers led at every break and consistently answered the Sharks’ surges with too much firepower moving forward

Tyreice Brown was terrific for the victors with 19 disposals, six marks and 4.2, while Talon Delacey had a game-high 25 touches and Max Mumme provided plenty of drive with his 24. Dylan Mulligan also took on some added responsibility well, finishing with 24 disposals, 23 hitouts and two goals. Samuel Otto notched a team-high 21 disposals for East Fremantle, followed closely by Luke Yeo (20, eight tackles) as the Sharks slipped down to fifth.

Subiaco slipped out of the top five after going down by a single point to South Fremantle in the round’s final fixture. A five-goal to one opening term from the Bulldogs proved crucial, as they were made to hold on amid Subiaco’s charge and only just managed to maintain their one-point lead from three quarter time, to the final siren.

Caleb Stephens again led the way for South with 22 disposals, joined by Tyler Piazzola on that figure, as Chase Bourne snared two goals from his 17 touches. Meanwhile, Jed Kemp racked up 36 disposals for Subi, with Jacob Evitt (25 disposals, five marks) another strong contributor.

While much of Western Australia’s top Under 19 talent donned representative colours this past weekend, there remained a handful of state squad members who instead ran out at League level. All five played in losses, starting with East Fremantle pair Corey Warner and Finn Gorringe. Warner’s level of consistency has been terrific in the senior grade, and he picked up another 15 disposals while also booting his first League goal. Gorringe had it 12 times, continuing his steady form in the top flight.

19-year-old Perth defender Jack Avery played his sixth senior game for the Demons and had his moments with 11 disposals and three marks. South Fremantle and Fremantle NGA small forward Jesse Motlop also popped up in spurts, laying five tackles and booting a goal among his handful of possessions. The state Under 19 squad will play against a select Perth squad this coming weekend, though all of the above players will turn out for their clubs should League selection again come knocking.