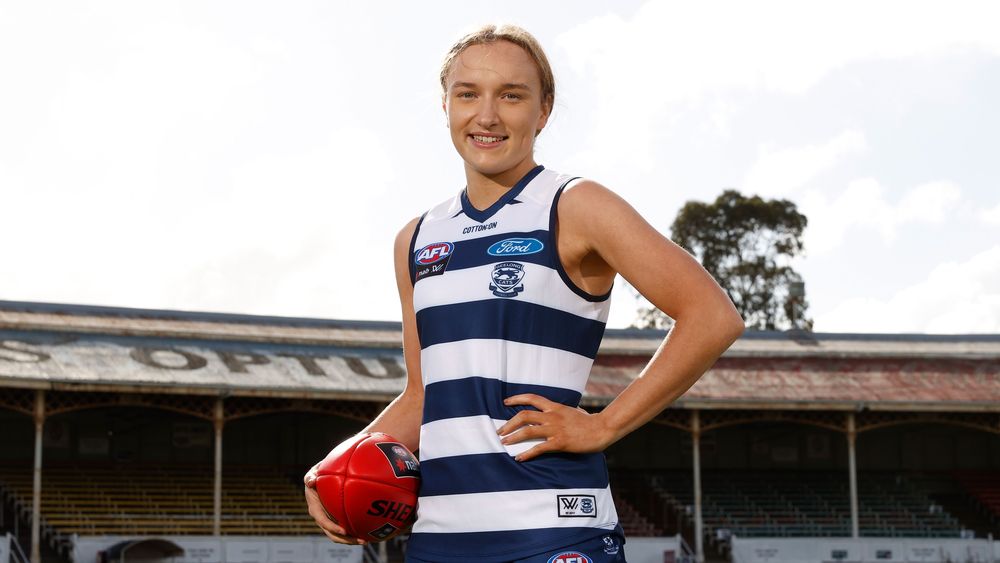 NOW the AFL Women’s Draft is done and dusted, Draft Central will review each club’s draft hand, and provide supporters with all the content they need to know about the latest additions to their AFL Women’s programs. We continue the club-by-club reviews with Geelong.

It was no surprise to see Geelong take Prespakis with the first pick in the Victorian pool, with the potentially generational talent near-impossible to deny in pole position. The sister of Maddy will quickly break that tag, with her own talents proving exceptional throughout the junior pathways – starting with her NAB League best and fairest win at 16-years-old in 2019. Prespakis is as well-rounded a midfielder you can find; able to win her own ball at the coalface, use her running capacity to accumulate around the ground, prove effective by hand and penetrative by foot, while also providing her fair share of tackling pressure. She is a star in the making and ready to go at senior level, providing ideal cover for the loss of Liv Purcell among a regenerating Cats midfield.

The Cats pulled off one of the surprise picks of the first round by taking Friswell at pick seven, though the selection is a shrewd one in context. A teammate of Prespakis through multiple competitions, the 17-year-old has waxed with her new Cats teammate through the NAB League, VFLW, and AFLW Under 19 National Championships. But let’s get it straight – she is far from just a sweetener in the Prespakis coup. Friswell is a gun midfielder in her own right with elite running capacity and a great balance of traits in the engine room. She was made to play a variety of roles throughout 2021 at either end of the ground, but looks most comfortable around the ball and has the potential to be a very reliable ball winning asset for Geelong.

Geelong seldom misses out on local talent and like usual, snapped up a Falcons graduate among this year’s intake. Having sured up their midfield stocks, Featherston was the player the Cats went for, an exciting player with rare athleticism and enormous upside. Such is the power of Featherston’s leap, she rotated through the ruck for Geelong Falcons and Vic Country this season at just 169cm and more than held her own. She is mostly stationed up forward though, where that same athleticism translates to her potential as a marking target who attacks the aerial ball with vigour and possesses a thumping kick. The 17-year-old is almost certain to capture fans’ imaginations with her style of play, and has great potential to grow into a top player.

After promoting mature-agers Claudia Gunjaca and Olivia Fuller from their VFLW side, the Cats added another with pick 15 in the form of Johnson. The multi-sport athlete is a relative newcomer to high levels of Australian football but has taken to the code quickly and shown a rapid rate of development over the last couple of years. The 20-year-old needed just one season in Geelong’s VFLW system to prove her worth, with her athletic base and promising state league form on both sides of midfield enough to see her crack the top flight.

Geelong’s draft night ended as quickly as it began, with the Cats on the clock early at pick two and out of action by pick 15. They were smart to pair Prespakis alongside long-time teammate in Friswell with their first two picks, making for a one-two midfield punch which promises to prove more than handy. The Cats always pick local and did so once again in taking on Featherston, adding some dynamism and excitement to a talented crop of midfielders. VFLW product, Johnson was the final cab off the rank, another athletic type who adds a different element to the midfield mix. With four selections within the top 15, the Cats have made good on an opportunity to accelerate their regeneration.