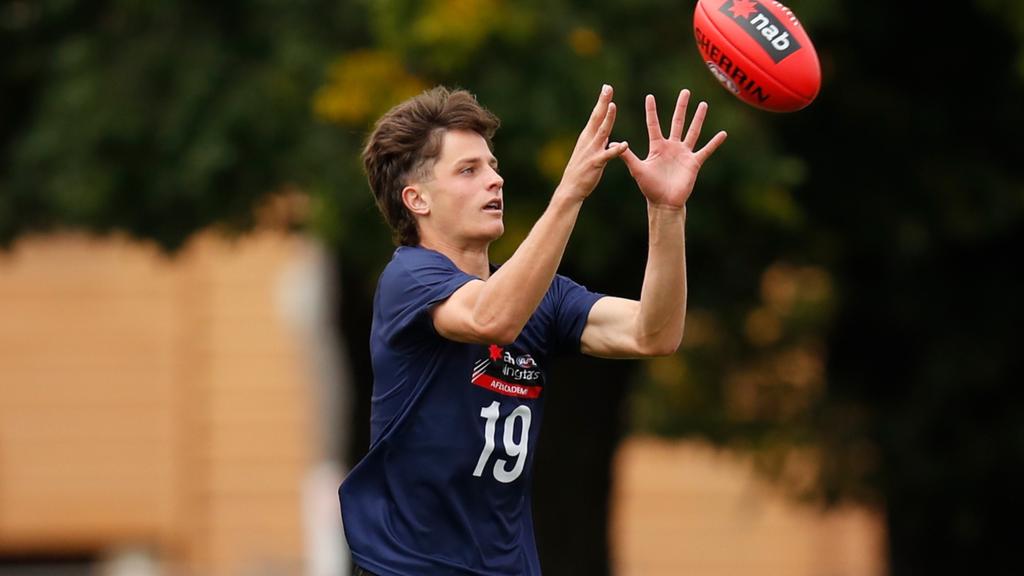 SUBIACO midfielder-forward Neil Erasmus has become arguably Western Australia’s top draft prospect in 2021 after some outstanding form to date. On Saturday, he made his return from a month-long injury lay-off, helping his state Under 19s side defeat a select East Perth squad 16.6 (102) to 9.6 (60). The 17-year-old got right back to his ball winning ways, notching 30 disposals and six marks as he warmed to the contest nicely.

With averages of 28 disposals, eight marks and four tackles at WAFL Colts level for Subiaco, and 37 disposals, nine marks and a goal for Hale School in the PSA, Erasmus is as consistent and dynamic an accumulator as any among the talent pool. We put his latest performance under the Player Focus microscope, covering his every move quarter-by-quarter.

The West Australian coaching staff would have been forgiven for wanting to ease Erasmus back into action off his quad injury, but the 17-year-old proved ready to go as he started at the opening centre bounce.

His first touch was a sighter for things to come, an uncontested mark at half-back which was followed by a neat kick down the line. In an early showing of his accumulative ability, Erasmus worked into space to receive the kick back and chip another forward.

He looked more comfortable in those open spaces during the opening exchanges, with the couple of times he got first hands to the ball in-tight resulting in rushed handballs away under tackling pressure. That tendency would later be refined.

Most of Erasmus’ work was done by hand as he peeled off the stoppages and worked back to finished the term with seven disposals (two kicks, five handballs) and two marks, despite going off sore with under five minutes left to play.

After being clipped in the latter stages of the first quarter, Erasmus wasn’t sighted at the opening centre bounce of term two. Once rotated on, he was thrust straight back into the on-ball mix and took some time to get involved.

The Subiaco star’s first big moment came with a terrific overhead mark at half-back, cutting across the waiting contest to pluck the ball solidly. In that same passage, Erasmus went on to chain three disposals together, following his short kicks to get the ball back and continue his side’s forward momentum.

In those instances, Erasmus was clean and used both feet with efficiency, showing great improvement in the kicking department. While not overly quick, he also hit ground balls at speed and was quite slick in his ball handling.

He fed plenty of runners in term two to finish with eight disposals (four kicks, four handballs) in total, bringing his tally for the half up to 15 disposals and four marks.

Having attended nine of 14 centre bounces in the first half, Erasmus was present at all seven during term three as he produced his equal-most productive term – at least in terms of pure numbers.

He began to show great poise in possession, taking time to assess his options before delivering neat kicks forward or flicking out handballs under pressure. His use by hand was again effective in releasing runners and opening up the play.

Erasmus also had a good defensive moment deep in his own 50m arc, corralling an opponent towards the boundary line and laying a tackle to force the throw-in.

He finished the quarter with eight disposals (four kicks, four handballs) once more, to go with one mark, one tackle, and an inside 50 kick as he broke clear from the corridor.

Erasmus began to utilise his kicking game in more diverse and impactful ways during a strong final quarter, in which he was again rotated on through the midfield.

His first break with ball in hand came at a centre bounce, where he swooped on the loose pill and kicked a bullet pass up to half-forward, before following up to ask for the hands back.

He still worked around the ground to find plenty of uncontested ball, but also snared first possession more often at the coalface. Erasmus’ best moment came late on as he received on the wing, turned forward quickly and executed a beautiful pass to assist Richard Farmer’s goal.

In the end, another seven disposals (four kicks, three handballs) saw Erasmus finish with 30 touches (14 kicks, 16 handballs) and six marks to put the stamp on an impressive return outing.

Erasmus firmed his case as Western Australia’s top draft prospect this year, hardly missing a beat in his return from a quad injury. The Subiaco talent ran out a full game in midfield and leant on his running capacity to find plenty of the ball, which he has had no trouble doing this year. He displayed marked improvement with his kicking on both sides and was typically clean by hand, while showing a single glimpse of his aerial ability with an overhead mark in term two. While not overly quick, Erasmus showed nice poise under tackling pressure and looked to stay on the move at stoppages, most often peeling forward once his teammates had won the contested ball. He attended 21 of 29 centre bounces for the day, but found most of his 30 disposals around the ground. As he continues to work back to full flight, Erasmus will continue to lurk around the top 10 mark, but certainly looks a first round talent.