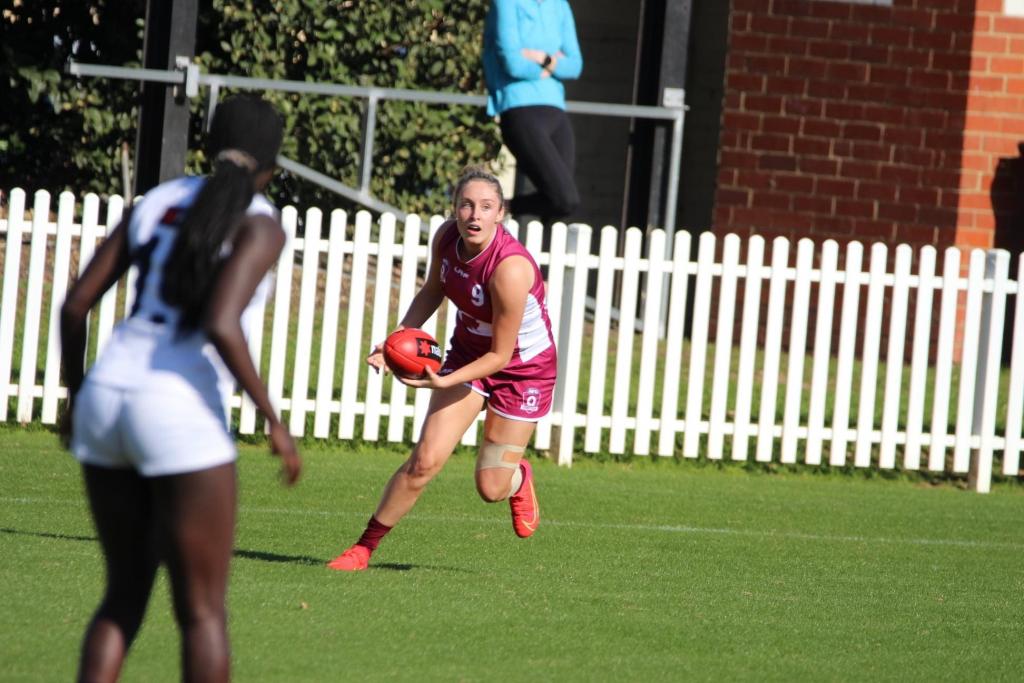 2020 GREATER Western Sydney draftee Tarni Evans is a name you may already be familiar with. In 2021, her younger cousin Sally Evans is looking to join her in the top flight come AFLW Draft day, on Tuesday. The 17-year-old Queenslander represented her state this year, while also developing through the Gold Coast SUNS Academy and at QAFLW level.

Akin to her established cousin, Evans has good speed on the outer and moves forward well. With the similarities evident, she says Tarni has been a key source of inspiration along her own journey.

“Watching her journey from where she started to where she is now (has been inspiring),” Evans said. “She played nearly every position, they’ve thrown her around and she’s adapted so well. She had a really great season.

“I would say my speed is a strength as I predominantly play along the wing, and my ground level movement – especially crumbing in the forwardline.”

Evans started out in Australian football five years ago, playing all of her juniors at Coolangatta Tweed before eventually cracking the senior grade. After getting a couple of QAFLW games under her belt for the Blues, she transferred over to Bond University and added a few more outings before season’s end.

While Queensland was beaten handily to the tune of 54 points against Vic Country in its sole Under 19 championships match, Evans could not fault the team for effort. She was also glowing in her review of the SUNS Academy.

“Obviously we didn’t love the outcome that we received, but I think we tried our hardest,” Evans said. “We probably could’ve gone in respecting them a little bit more knowing how good of a team they were, but I think we did our best.

“I love the academy. Our head coach Sam (Iles) is awesome, he’s always wanting the best for us and always trying to give us as many opportunities as possible. All the girls are fantastic.”

Being drafted “for the SUNS or any team” is Evans’ end goal for this year, but she also has her sights on simply improving “everything” in her game. Learning game structure and sharpening her marking skills are top of the list, and would add to the promising arsenal of weapons she hopes to wield at the top level.