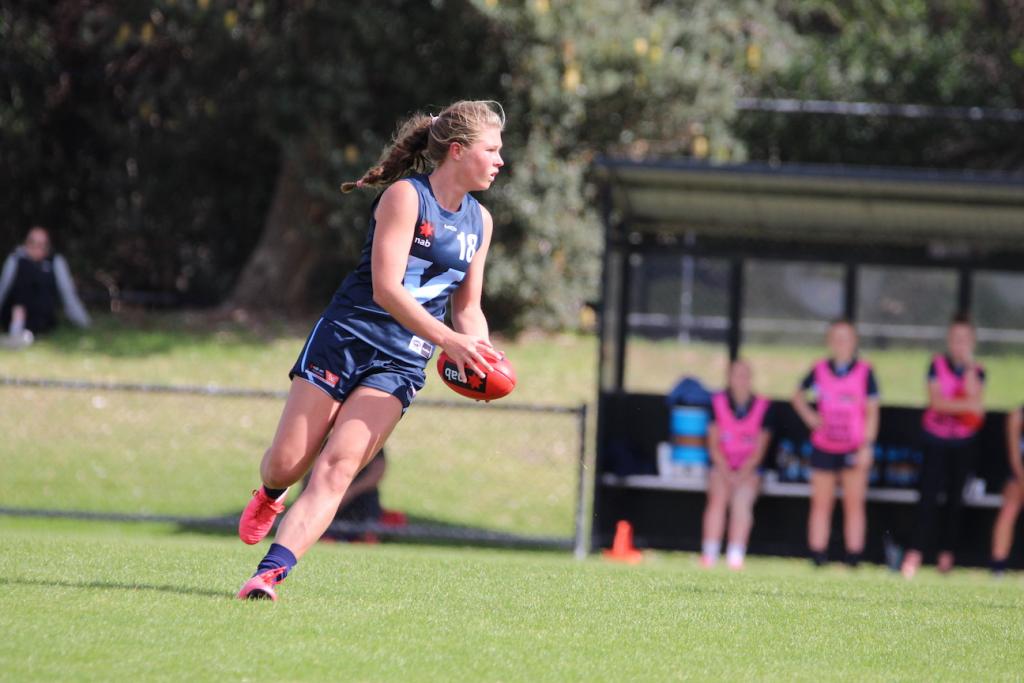 ONE more sleep remains until the 2021 AFL Women’s Draft and the 14 clubs are preparing to welcome a host of new players into the elite system. Draft Central has split its club-by-club draft previews into two parts, starting with the first seven clubs of Adelaide to Gold Coast in this edition, with the GWS GIANTS through to the Western Bulldogs published tomorrow morning. We take a look at the selections your club has, and some of the names who could replace outgoing players, or add something new to the table.

The Crows enter the draft with three selections, and an abundance of talent at their disposal. Going all the way to the AFL Women’s Grand Final for the third time, the Crows do not need a great deal of anything in particular, and more can grab best available talent. With Rhiannon Metcalfe ruled inactive for the 2022 season, it opens the door for Zoe Prowse to come in, with fellow AFLW Academy member Gypsy Schirmer capable of playing a similar role to the outgoing Chloe Scheer as well. Both players are expected to take up two of the Crows’ three selections.

From there it gets a little tougher, but there are five genuine South Australian options who could fill roles, with Glenelg’s Brooke Tonon – SANFLW premiership player and late addition to the AFLW Academy post-championships – and Zoe Venning – All-Australian and West Adelaide best and fairest winner – the two front runners. Tahlita Buethke adds a point of difference and could be that athletic type the Crows swoop on, whilst Lauren Breguet is a powerful forward that could play the Scheer role if Schirmer is destined for another position, and Abbie Ballard being that pinpoint left foot mid-forward with hardness.

Brisbane coming off its inaugural flag has a fair bit of experience out the door with captain Emma Zielke and the experienced Lauren Arnell among the retirements, as well as Jordan Zanchetta and Rheanne Lugg also departing. They picked up Phoebe Monahan as a free agent from the Tigers, but will be looking to top up with some terrific talent around the field. Luckily for the Lions, their Academy is brimming with talent. AFL Women’s Academy members Maggie Harmer and Mikayla Pauga are the two names at the top of the list, with Harmer a half-back with a capacity to push up to a wing thanks to her strong running power, and Pauga a clever half-forward with clean hands and a nous for goals.

Outside those two, the likes of Bella Smith and Abby Hewett standout, with Smith that inside bull who will put her body on the line each and every contest, while Hewett can play wherever is required from inside, to outside, forward to back, and has versatility very few have. The quartet have been the standout players this season, with Queensland captain and half-back Christine Okesene a chance with her booming boot, and Casey Wynne another member of the Academy who received an AFLW Draft Combine invite. Steph O’Brien is a mature-age tall with a long netball career.

Carlton had a busy trade period, and not in terms of incoming players. They lost serious experience in overhauling the list, as Alison Downie, Katie Loynes, Tayla Harris and Jess Hosking all left, though Jess Dal Pos joined the Navy Blues to regain a bit of readymade experience. Whilst the Blues have Pick 10 and Pick 11 in the overall draft, it equates to Pick 6 and Pick 7 in the Victorian pool. Expect the Blues to pick up a tall and a small with the selections if available, with a midfielder on their radar. Whilst unlikely to slip through two Geelong picks, Tess Craven would be high up on the radar to replace Hosking, with Tara Slender and Ella Friend two key position talls who could play the versatile – even more so – role that Harris did.

With a couple of handy mid-20s picks as well, the Blues would look at Tahlia Gillard – at either set of picks – if Slender and Friend are both unavailable – whilst Stella Reid and Brooke Vickers are a couple of slick ball users that the Blues could bring in. For their last selection, the Blues might grab an experienced VFLW player such as Meagan Kiely, Brooke Hards or Alana Barba to immediately fill a hole through the middle, with the Blues known for picking up other VFLW teams’ players.

The Magpies are coming off a great season, getting within a kick of an AFLW Grand Final and pushing the eventual premiers Brisbane all the way. The Magpies will be in and out of the draft quickly once they start, with three consecutive picks in the Victorian pool. Collingwood will almost certainly look to bring in a tall option given the retirements of Sharni Norder and Abbey Green, though Sabrina Frederick and Alison Downie coming into the side gives them some cover in that area. They might want a tall forward option who can roll through the ruck as a long-term solution, which means Tahlia Gillard is a potential player who they bring in, though they could also look internally at VFLW leading goalkicker Imogen Barnett who is right under the Magpies’ nose.

Other Collingwood VFLW players who have stepped up this year include Jasmine Ferguson and Marla Neal, with Matilda Zander and Olivia Meagher among the most consistent talents for the black and white. From a NAB League Girls perspective, the Eastern Ranges and Oakleigh Chargers have a good connection with Collingwood, and Keeley Sherar or Brooke Vickers could be options for the Magpies. Gippsland Power ruck Grace Matser, or Dandenong Stingrays forward Ashleigh Richards are others who could fill needs for the Pies. Ex-Demon Tegan Cunningham is a readymade Round 1 replacement inside 50 as a forward/ruck.

Fremantle has a lot of list options with six selections given he high volume of outs compared to ins over the trade period. Sabreena Duffy and Ashley Sharp are unavailable next season, with a further five players also exiting the club without bringing anyone in, meaning the Dockers have plenty of room for a mix of youth and experience. The big question mark will be whether or not they go tall or small at their first selection, with West Coast having first dibs on a West Australian prospect. The Eagles are tipped to go Courtney Rowley, which means the Dockers would lean to key position utility Amy Franklin. If the Eagles pick up Franklin, the Dockers will grab Rowley, though Charlotte Thomas is the other possibility, with the AFLW Academy member missing the majority of the 2021 season through a wrist injury.

After their first selection, the Dockers will have a fair bit of free rein at the back-end of the West Australian Pool, with five of the last six picks in that Pool. Dana East is a talented inside midfielder who could be still on the board at the Dockers’ second selection, with Sarah Lakay a ruck potential if the Eagles do not snap her up first. Jade Halfpenny is a Norwood talent choosing to take a chance in Western Australia and is readymade to impact inside 50, whilst Emily Bennett, Bella Mann and Beth Schilling can all play behind the football, and Nyra Anderson and Tessa Doumanis inside 50. Chloe Reilly is a versatile utility with potential to step up to the next level, whilst North Melbourne’s Airlie Runnalls and Geelong’s Thereisa Meissner are those from the VFLW opting to head west.

Geelong will be quick to finish off its draft given the Cats hold four picks inside the first nine Victorian selections. Knowing they have the first Victorian pick, they will be able to replace the experience like retiring Aasta O’Connor, and a dozen of delisted players headlined by Richelle Cranston. Olivia Purcell headed to the Dees, and Denby Taylor will sit out the year, whilst Chantel Emonson and Chloe Scheer provide much needed experience back into the line-up. Holding the first pick in the AFLW Draft, the favourite is Calder Cannons Georgie Prespakis, who will immediately provide an improvement to the onball brigade, also able to play forward as a strong one-on-one player. She is tipped to be the one chosen at the selection given her standout season, and following in the footsteps of sister Maddison.

As for the remaining three Geelong selections, a tall is tipped to be somewhere in there, with Ella Friend and Tara Slender both likely to be on the radar, whilst a handful of Geelong Falcons would be considered. Tess Craven is a name that jumps off the page, but whether or not the inside midfielder is still there, is yet to be seen, but another few choices include defender Annie Lee and clean forward/mid Poppy Schaap, with Gabbi Featherston another potential local pick. If looking for an additional ruck, Tahlia Gillard is one the Cats might turn to with their final selection.

Gold Coast kick off proceedings tomorrow night and should have a fairly predictable draft hand for the first two selections. Sally Riley, Sam Virgo and Leah Kaslar all departed the club, with experience such as Jordann Hickey among a host of delisted players. St Kilda’s Claudia Whitfort and North Melbourne’s Vivien Saad came into the fold late, and left the Suns with four selections – as well as the opportunity to pick a couple of mature-age talents if required. The first pick is predicted to be Oakleigh Chargers’ Charlie Rowbottom who opted to go to Queensland ahead of her home state Victoria, and the Suns will duly reward her with the first pick in the draft. The other consideration is Suns Academy member Teagan Levi, with both players being talented inside midfielders who can impact with their size around the stoppages.

With the first two selections done and dusted, the Suns have some choices after that, with key defender Giselle Davies one player who might get chosen for Gold Coast as a tall option, whilst Madison Goodwin is another big-bodied midfielder who can impact. Having access to the Northern Territory zone, the Suns would consider 18-year-old Grace Mulvahil out of Southern Districts to provide some run and carry off half-back, whilst dangerous forward Ashanti Bush – eligible for an over-age selection – is another top prospect, with Bella Clarke – a 20-year-old who has come through the junior representative programs – the other AFLW Draft Combine invite this year.