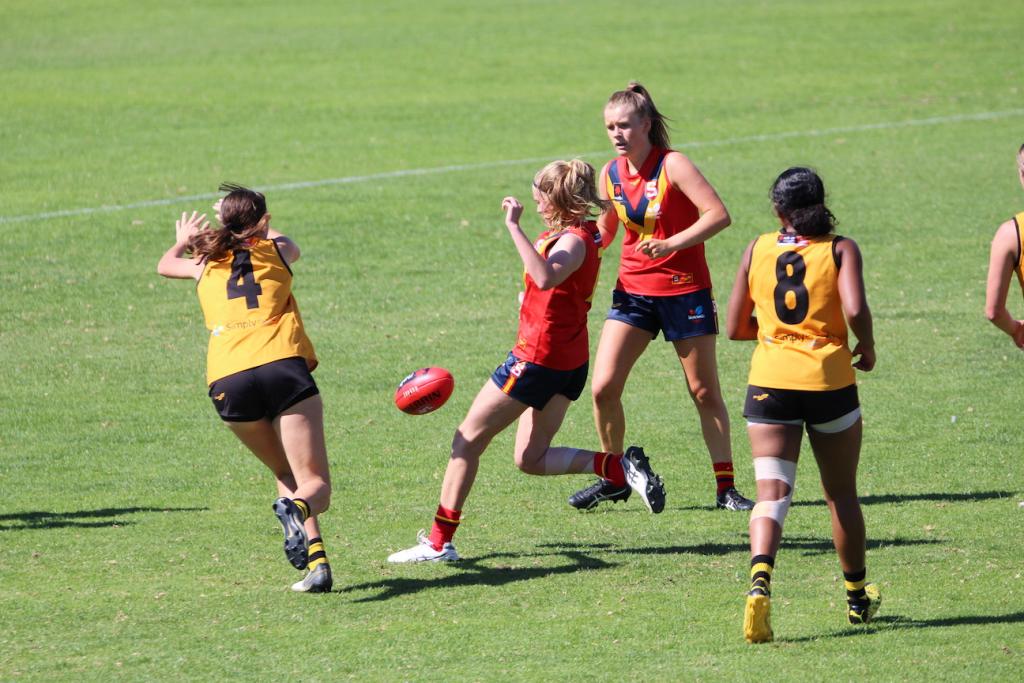 SO impressive was Brooke Tonon‘s form in 2021, she earned a call-up to the illustrious AFLW Academy. She was fresh off an impressive Under 19 National Championships campaign with South Australia, and en route to SANFLW premiership honours with Glenelg – showcasing a rapid rate of development across both competitions.

The SANFLW team of the year half-back proved more than capable at senior level, flicking a switch once past the white line with a blend of aggression and skill. After debuting last year, Tonon says she has “learned so much” in a variety of roles.

“My game has developed massively since I started playing,” Tonon said. “I’ve learned all positions. I started off forward, played on the wing, and now in defence so it’s been really good.

“I’m really loving half-back right now. I don’t mind the wing and I love playing forward, obviously kicking goals, but it’s a really hard position to play and I feel more naturally suited to the backline.”

The 17-year-old has truly found a home at half-back, a position which suits her strengths, but also allows her to properly assess key areas of improvement.

“I feel like I have the ability to read the play really well,” she said. “I can position myself in spots where I can impact the game and with my execution by foot, I can see where to kick to and hit targets.

“I need to learn when to not attack as much and kind of stay back, or settle myself and be more composed rather than rushing and playing on. It’s just switching between attack and defence as I’m playing half-back.”

Tonon’s game has grown throughout the junior talent pathways too, having been mentored by the likes of AFLW star Chelsea Randall in the Crows Academy, and eventually ending up among South Australia’s Under 19 squad. Having travelled over to Melbourne for the second National Championships leg, Tonon lauded the experience as “awesome”.

“Coming (to Melbourne) and playing against so many more talented girls, the competition’s amazing,” she said. “Then learning off everyone (in the SA team), I’ve never met a more talented group of girls ever. They’re amazing.”

Amazing is right, and competition for spots at the next level will be tough in 2021 for the South Australian crop as Adelaide is the state’s sole AFLW side. Tonon hopes to be one of a predicted four talents drafted in that bunch, but says she will remain optimistic if things pan out differently.

“I really hope to get drafted, but if that doesn’t happen I’d love to keep playing really good SANFLW footy and hopefully make my way up through there,” she said.