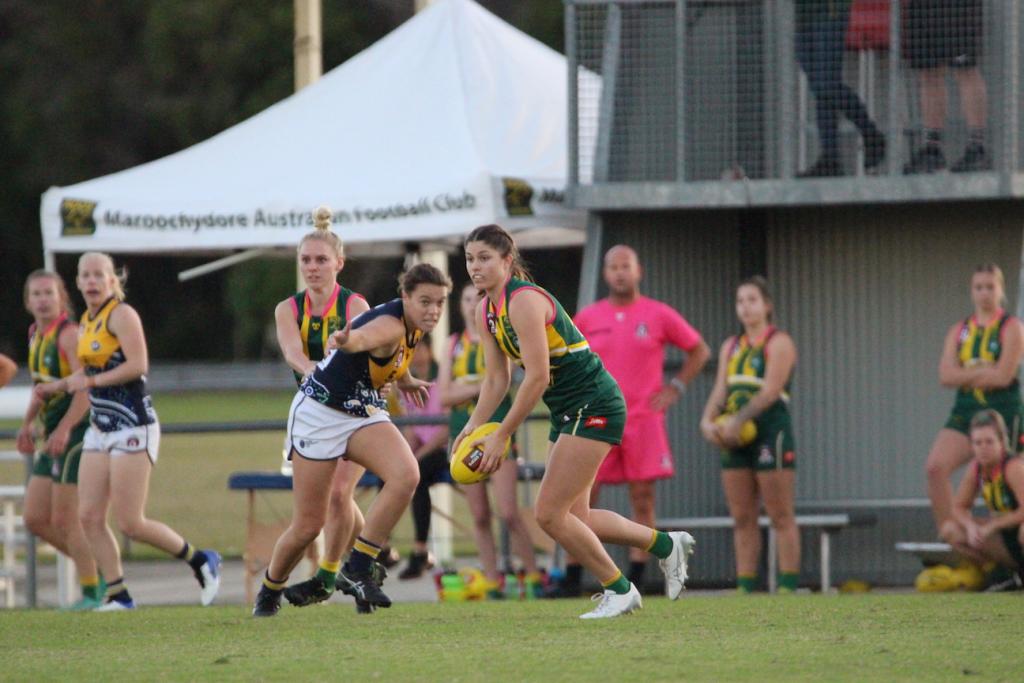 IN the air and on the ground. Intercept marking combined with run-and-carry. That’s the kind of impact Maroochydore prospect Maggie Harmer aims to make across half-back. The versatile talent is in line to become one of the first Brisbane Lions Academy products called out on draft night, and has a pair of senior defenders to look up to.

Come July 27, Kate Lutkins and Nat Grider could go from idols to teammates for Harmer, who is hoping to harness their respective strengths in order to get “the best of both worlds” as a player.

“Kate has such a good intercept mark and Nat has also got that run-and-carry which is really good, so it’s the best of both worlds between them,” Harmer said.

With the long-term goal of simply improving as a player in mind, the 18-year-old recognises her strengths, but also her areas for improvement.

“Across half-back, (my strengths are) reading the play and taking intercept marks when the opposition is looking for those forward 50 entries and trying to cut off those long kicks,” Harmer said.

“I’m more of an (aerial) player, so my ground balls are always something I’ve wanted to work on, just clean pick-ups. Also my one-on-one contests, holding my own up against those bigger girls.”

Harmer has earned a raft of opportunities since being introduced to Australian football in her final years of primary school, culminating in AFLW Academy honours, Under 19 All Australian selection, and the opportunity to represent her state throughout 2021.

Above all else, Harmer says the opportunity to test her skills and be challenged by the nation’s best talent provided some valuable tests and lessons.

“I didn’t think it was going to be that much of a flogging (against Vic Country),” she said. “But the score didn’t really represent the contest.

“(AFLW Academy training) is big challenge because it’s another step to what we’re used to at club training and even academy. But I think it really pushes you to be the best player you can be and try to keep up with those older girls that are playing at such a high level.”

In their only National Championships dig for 2021, Queensland’s Under 19s went down to Vic Country by 54 points down in Melbourne, but Harmer was able to showcase some of her best traits with 15 disposals, five marks and five tackles.

Her ability to turn attack into defence with that aforementioned intercept game, as well as positive forward running makes Harmer a productive type. Queensland talent manager Mark Browning also gave a glowing review, boding well not just for draft night, but for her impact on the game in years to come.

“She’s probably the one that excites me the most when she trains,” Browning said. “It hasn’t quite transpired to games yet, but I think she’s got the most natural running out of all of them.”