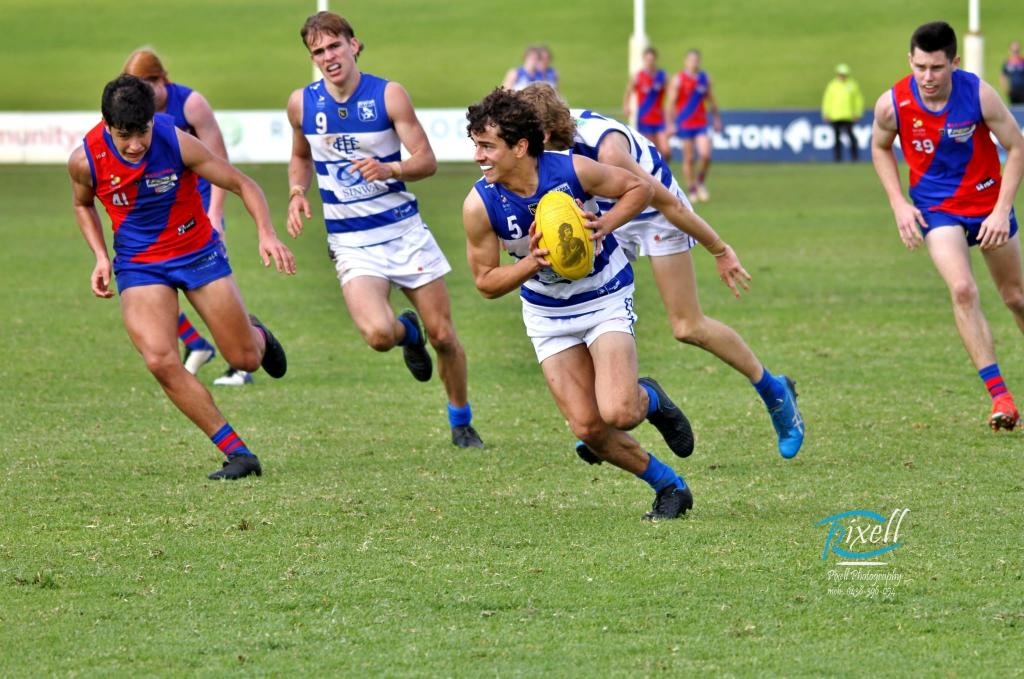 WHILE a bunch of Western Australia’s best talent went head-to-head in Saturday’s Under 17 vs. Under 19 trial game, the WAFL Colts competition rolled on into Round 15 over the weekend. Swan Districts swooped on a ninth win to continue its reign atop the table, while West Perth closed the gap on fifth with an upset win over East Fremantle.

We recap all the action and outstanding performances in our weekly wrap, while also taking a look around the grounds at youngsters who impressed in senior grades.

Claremont continues to hunt the top two sides after defeating Peel Thunder by 29 points last Friday night, 10.13 (73) to 6.8 (44). The Tigers shot out of the blocks with four goals to one in the opening term, holding at least a 20-point buffer at each break in what was a strong victory.

Kendyll Blurton’s fine form continued, as he notched a game-high 29 disposals to go with six inside 50s for the winners. Talon Delacey was again his partner in crime with 26 touches and five tackles, while Max Mumme had it 20 times and kicked a goal in his second game back at the level.

For Peel, Aquinas College midfielder Michael Sellwood returned well from a finger injury and PSA duties, collecting a team-high 23 disposals and five inside 50s to go with a goal. The versatile Cooper Osbourne managed 21 touches, while small midfielder Scott Tuia finished with 16.

While plenty of stars were impressing in the weekend’s state trial game, East Perth did enough to beat Perth by 22 points in Saturday morning’s opening fixture, winning 8.16 (64) to 6.6 (42).

Perth had a couple of shining lights in its 11th loss, as Damian Sinclair notched a team-high 29 disposals, while Harry Quartermaine took 12 marks among his 26 touches. Aiden O’Driscoll, the brother of Fremantle’s Emma and Nathan was the game’s sole multiple goal kicker, snaring two in his fourth outing at 16-years-old.

West Perth closed the gap on the top five, drawing to within a game of the leading pack with a 19-point upset win over East Fremantle, coming from behind at the final break to get up 11.9 (75) to 8.8 (56).

Luke Michael led all comers with 31 disposals and 14 marks for the Falcons in his best showing for the season, while Luke Reilly (28 disposals, nine tackles) and Darcy Dixon (21 disposals, 1.3) also got busy in the win. Rucking against stiff opposition, Riley Sprigg showed promising signs with 15 touches and 32 hitouts.

Kobe McMillan was the Sharks’ ruck, returning from Reserves duties to share the role with Joshua Cripps. Their top ball winners were Jake Urquhart (29 disposals) and Samuel Emery (28), while Fremantle NGA hopeful Richard Bartlett was amongst the goalkickers.

Meanwhile, Caleb Stephens continues to shine for South after his 35 disposals and two goals, supported by Caden Turnbull (27 disposals, eight marks) this time out with pressure mounting on the Bulldogs’ fifth-place standing.

Fremantle NGA prospect Jesse Motlop, the son of Daniel, made his League debut with South Fremantle on Saturday, booting two goals from 13 disposals as his Bulldogs beat Swan Districts. If not for his top flight berth, the exciting forward would have run out for the Under 19s state squad on the same day.

A few of WA’s most highly touted talent also missed Saturday’s trial game through injury, headlined by Subiaco midfielder Neil Erasmus. Prolific East Fremantle midfielder Josh Browne and versatile Perth tall Jaiden Hunter were also in that boat. The former two should be available for the Under 19s carnival-opener against South Australia on August 7.

At Reserves level, Deklyn Grocott (Perth) and Tyrell Metcalf (Swan Districts) were among those to continue their step-ups into senior grades. The former managed 14 disposals in Perth’s win over East Perth, while the latter had 13 touches as Swans went down to South Fremantle.