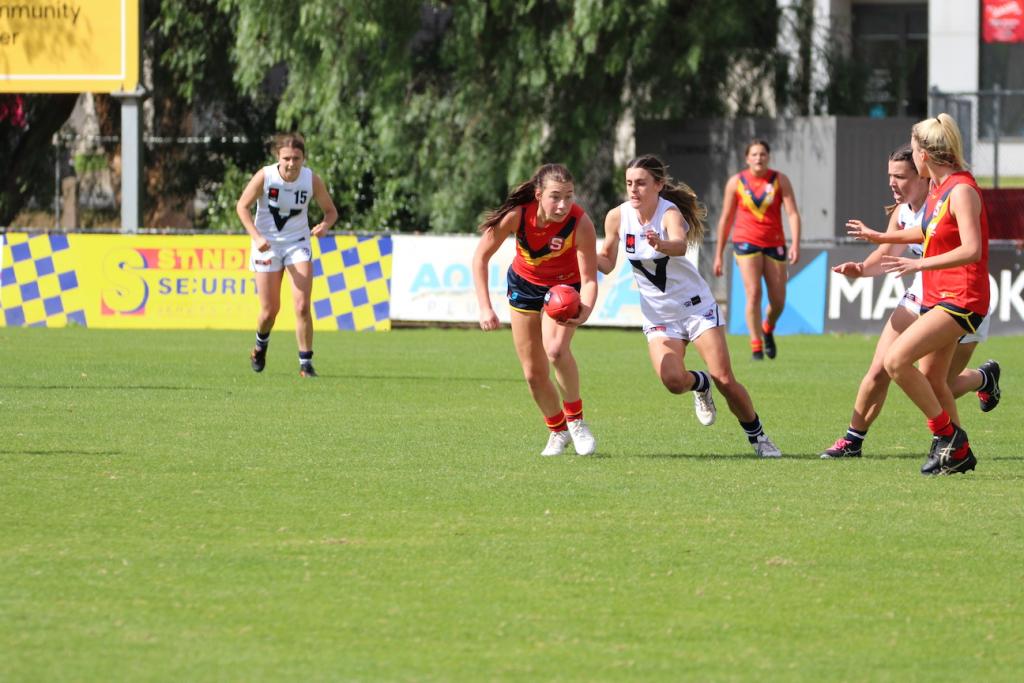 BY her own account, Lauren Breguet‘s footballing journey is “a bit of a long story”, and the explosive Central District forward has come quite some way in a short period of time. The 18-year-old hopped codes and borders to get to where she is now, thriving at SANFL Women’s level and in the South Australian State Under 19s Academy.

“I originally started basketball in Mildura, then my mum was like ‘it’d be a great idea for you to play football’,” Breguet said. “I started doing the Bendigo Pioneers programs over there before we moved for family reasons. Then I made it to Centrals and now I’m in the state squad, so it’s pretty exciting.”

Breguet says she’s “loving” being part of Centrals’ senior side, with which she played seven games in 2021 through injury and representative interruptions. Above all else, it has proven a valuable “learning opportunity” both on and off the field – from learning new positions, to gaining life lessons.

“It’s been a great experience,” she said. “I’ve learned so much from all these different coaches. It’s just such a great learning opportunity that I can take on and hopefully better my football, and even life lessons. “I’m still learning the game. I’m starting to learn more positions which I find really useful. I’m still (improving) the defence side of it, and I’m almost finished learning forward which is great.”

While still honing her defensive game in a positional sense, Breguet is “never shy of putting [her] body on the line”. With terrific speed both in possession and while chasing, she boasts some eye-catching traits in the forward half.

They show in her season averages too; managing 10 disposals and three tackles per each SANFLW outing, while lifting to 10.7 disposals and five tackles across three AFL Women’s Under 19 Championships games. All that, while most importantly hitting the scoreboard in both competitions.

It was little surprise, then, to hear just which current AFLW stars the youngster looks towards for inspiration.

“I look up to Darcy Vescio, I find her a great forward, and Monique Conti,” she said. “They’re both really great at what they do and that’s what I aspire to be like.”

With the season run and done, Breguet recently took part in South Australia’s AFLW Draft Combine, an event where selection indicates promising interest at the next level. The Centrals forward is taking nothing for granted though, simply aiming to “improve” and go “as far as [she] can” with her football.

“Even if I don’t make AFLW, it’s still a great opportunity… to meet some new people and love the game even more,” she said.

Breguet, along with hundreds of prospects from around the nation will hope to have her name called out at the fast-approaching AFLW Draft, on July 27.