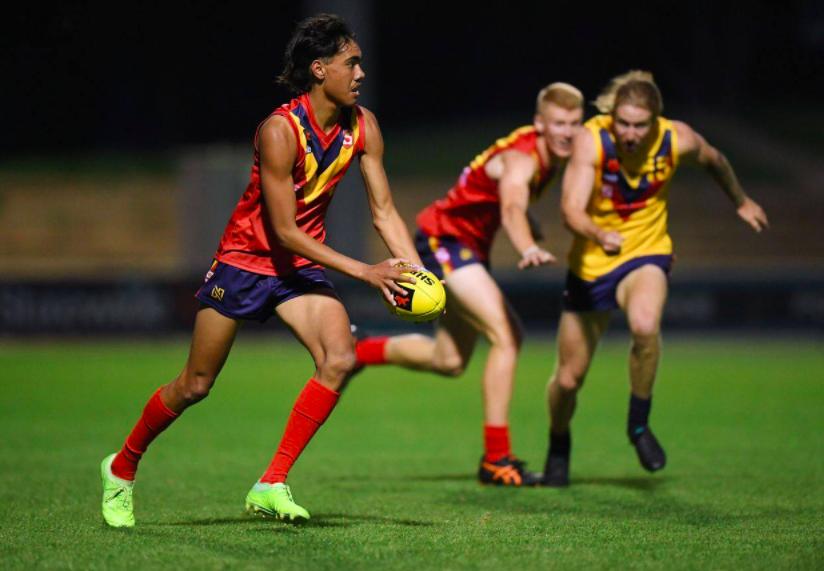 SOUTH Australia’s best available Under 19 talent went head-to-head on Friday night, contending with shocking weather to stake their claims for representative honours. A stronger Team Yellow handily beat its Team Blue counterpart, 8.7 (55) to 2.8 (20), though the result was an afterthought with state squad spots up for grabs.

First round prospects Jason Horne (League), Matthew Roberts, Arlo Draper, and Cooper Murley (all injured) were among those unavailable, but there were still some handy standouts who showed their class on a tough night for clean footy. We highlight them below in our opinion-based Scouting Notes.

Wet conditions typically suit those low to the ground and Dudley, the smallest player afield at 166cm, took toll. The Adelaide Next Generation Academy (NGA) product was crafty in his small forward post, proving near-impossible to monitor on the lead with his clever runs and deft bodywork. He kicked the only goal of the second term, edging the heavy ball home from a set shot, before adding another in the third. Dudley also got a late run in midfield and showcased slick skills, but looked most dangerous inside 50 when Team Yellow entered on a fast break.

Another of the crafty smalls for Team Yellow, O’Loughlin took up his usual position down back but also rotated nicely through midfield. He helped form a high line behind the ball, pushing up aggressively to force turnovers at ground level and thrust his side into attack with a sharp kicking game. The Adelaide NGA hopeful was particularly prominent in term four, as he found the ball in more space around the ground and hit some nice targets on the move.

Usually a consistent ball winner, Jackson proved as much once again as a staple in the Team Yellow midfield. He often took up the anchor spot at the back of centre bounces and read the flow of play beautifully to receive first hands on the outer. With a burst of speed, Jackson would then wheel around and carry the ball forward on his left side, but was sometimes let down by his kicking in the tough conditions. The North Adelaide midfielder also had a shot on goal in term one, seeing his attempt pushed wide as he was squeezed for space while kicking.

One of six 19th year prospects afield for Team Yellow, Grubb warmed to the contest well and got quite busy in the front half after quarter time. Starting forward, the Centrals speedster pushed up the ground before looking to use his pace when carrying back towards goal. He proved threatening in those quick passages and even had a couple of set shot chances on goal, which he couldn’t quite convert with the heavy ball.

While not his most prolific performance, Rayson was still able to showcase some of his value in a variety of roles. Stationed behind the ball and on both sides of midfield, the Glenelg prospect ran hard and provided nice drive with his speed and equally quick ball movement. He lurked on the outer and looked to either receive or work into space around the ground, where he typically does his best work in transition.

The lightly-built Port Adelaide father-son prospect was one of the best players afield before half time, racking up plenty of ball as he waxed between midfield and defence. Burgoyne, whose champion uncle is aptly nicknamed ‘Silk’, showed some of that exact trait with his sharp baulks and poise in possession. He found his way out of tough spots with class, propping in traffic before distributing cleanly by foot. He accumulated many of his touches across the backline in term two, but saw the play head back his way many times with clean ball movement difficult to generate.

Another talent with famous names to carry, Wanganeen-Milera is blazing his own trail. He looked the most polished player afield amid heavy rain and wind, making the wing his own and operating nicely between the arcs. The recent Glenelg League debutant proved threatening with his classy ball use going forward, making terrific decisions under pressure and finding ways to hit targets inside 50. While not always leaning on his speed, Milera played the conditions well with more agile shifts and can be damaging either way on the outer.

Liddy staked his claim for best afield honours, and could well have been through sheer output across the four quarters. The 19-year-old Sturt midfielder was a mainstay at the contest, using his mature frame to burrow in over the ball and bustle out of stoppages. He used his strength in those instances and was quite effective in both his decision making and use by hand, while still looking to develop his kicking and outside run. Liddy capped off his effort with a goal on the run in term three, taking the advantage and steadying nicely inside 50.

Involved throughout the defensive half, Thomson did his best to impact contests and stop incoming opposition attacks as they flew in. Had a few crucial moments early on, taking a couple of intercept marks in the defensive 50 and kicking it out wide. It became evident pretty quickly that Thomson is able to get good distance behind his kicks, generally gaining 40 or 50 meters on each one, with a kick in during the second quarter where he took three steps and launched it to the centre square the best example of his penetration.

Looking like one of the standout performers from the Blue side, Dnistriansky was seemingly involved in everything in the backline, mixing his intercept marking and kicking ability to cause constant headaches for the Yellow forwardline. He took his time to work into things but once he stuck his first mark he was always present. The Norwood prospect looked to kick the ball wide when he had possession and there weren’t any options up the ground, but wasn’t afraid to take trickier kicks further up the field to try and create something offensively, in a game where those opportunities didn’t come about too often. He pushed up the ground as the game went on and started taking marks on the wing to send the ball long inside 50.

Whitlum was sighted everywhere through the game, impacting in all thirds of the ground. He looked his best in the thick of the contest, able to throw his weight around and knock others off balance to win the ball, or apply high pressure on opposition ball winners to force stoppages. It was the story of his game early on, unable to really stick tackles but pushing opponents into tricky spots, but as he worked into the game he started sticking them more. Whitlum generally used the ball well by foot, taking safer options when they were presented.