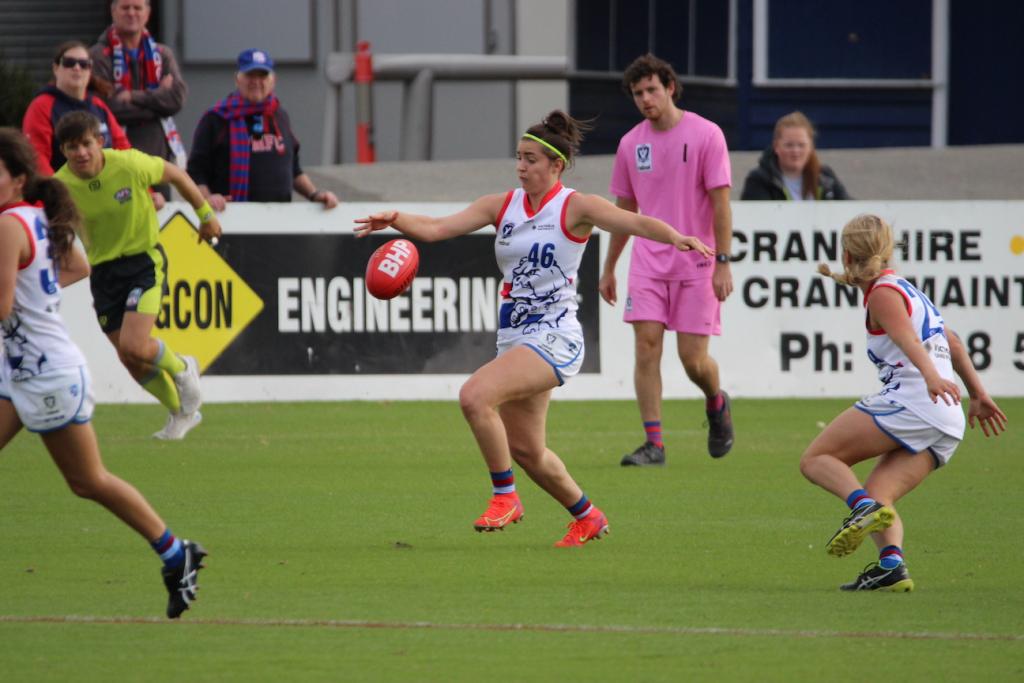 THE road to the AFL Women’s is not always straight forward, and for the 2020 draft-eligible players, a global pandemic was thrown in the mix. For aspiring Victorian AFLW Draft players, their top-age year was effectively thrown out the window, not able to play any competitive matches after March, and even were limited with training sessions. In this exclusive Player Diary, we get an insight into one of those player’s journeys.

Like every footballing journey, it starts somewhere and last Thursday, the first of a two-part AFLW Draft Player Diary, ex-Bendigo Pioneers and now Western Bulldogs VFLW Player Brooke Hards outlines the highs and lows of her footballing journey from when she first picked up a ball, to the AFL Women’s Draft.

In this part two, will feature Brooke’s 19th year in the VFLW and how she has adapted to playing senior football. It will also get a few thoughts on the upcoming AFLW Draft.

AFLW Draft recap from Part I

Night of the draft was a lot of emotions and feelings coming through, my family and best friend Annabel Hocking came over to my dad’s house. I had the closest people to me there supporting me, sadly I did not get drafted. I was down and put out of routine for a bit but was slowly finding my way back into it. Year 12 was becoming to an end and I was waiting to see if I got into university whilst waiting, I got a fair few phone clubs from different clubs wanting me to play VFLW for them and I had a lot of decisions I had to make. Had two meetings with two different clubs and had to make my decision. I got into Victoria University so I chose the Western Bulldogs VFLW team to go to, it was going to make things a lot easier for me and I was super excited.

I played all 14 games, played all the positions on the ground, I was very lucky to play against some AFLW players that has helped me grown into the footballer I am today and developing my skills on a larger basis. Playing with such a friendly inspiring team made me feel so comfortable coming into a new team and club. Sean Kavanagh was a great coach, he always pushed us all and his speeches before the games always made me so keen to get out on the ground, it was motivating.

Also, I was very lucky to have Nathan Burke on the sidelines for majority of games helping and using his loud voice to direct us at times when we need it. The coaching staff were incredible and always tried getting the best out of each of us because they’re also so passionate as well as us players. Playing with some top talent for the AFLW Bulldogs team, I learnt a lot off them and look up to them as well. Kicking a goal against St Kilda with Jess Fitzgerald and I doing the double cobra was such a highlight of that particular game.

Upcoming draft will be different, with a lot of talent not getting picked up last year and has played a year of VFLW whilst everyone has improved in their skills. As like everyone, I’m excited but always keeping a level head if the same thing happens like it did last year. The Western Bulldogs improved my skills and I’m only going to keep improving and that is exactly what excites me the most. I would love to be drafted, mainly because I want to continue to improve, and I want to excel. There will always be nerves and stress, but you can only control what you can control and this point of time I can only focus what I can control, which is continuing on trying to be the best version of myself. I will be surrounded by family who have non-stop supported me throughout the process and it will continuously be there no matter what the outcome is on the 27th of July.