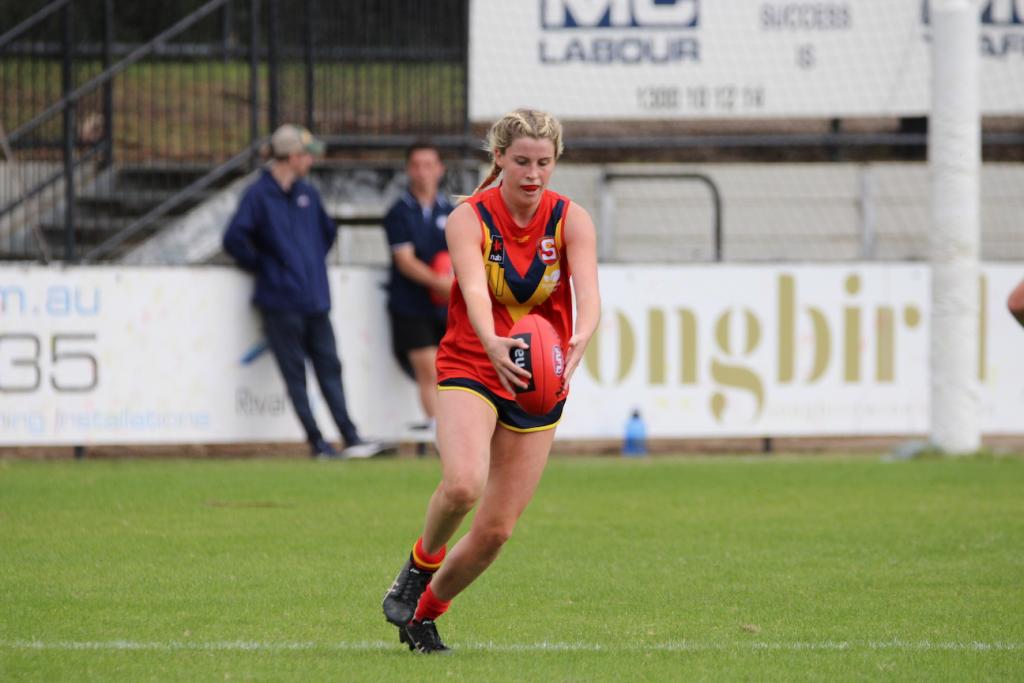 WINNING your club’s best and fairest award over the league and state Under 19s MVP is no mean feat, but it’s exactly what West Adelaide midfielder Zoe Venning pulled off in 2021. The tenacious ball winner was part of a strong Westies side which surged to this year’s SANFL Women’s grand final, averaging 16.5 disposals, 4.7 tackles, and 2.1 clearances across 12 games.

Having previously played netball at a high level, the 17-year-old says she knew exactly what it would take to be able to put in the “extra effort” required to make such strides at senior level.

“I was quite high up with my netball so I was used to putting the extra effort in off the field,” Venning said. “I always did my running… I know what it takes to put in hard work so that wasn’t something I was inexperienced with, it was more the age gap because I had always played with girls my age.

“Moving to SANFLW and playing with older girls matured my level of training, being a bit more mature was the biggest challenge.”

Venning credited her footballing journey to her dad, who encouraged her to “give it a go” having already excelled in netball and basketball. After starting out with the Mitcham Hawks, she fell in love with the game and soon found team success closer to home.

“I got to where I am now through my dad,” she said. “I first played at Mitcham Hawks when I was 13 and I didn’t want to play at all but dad said ‘come on Zoe, give it a go’ and I really liked it. My first game I got a lot of it, kicking off my shin but I just loved it.

“My dad wanted to make a girl’s program where I live, so he started up the Blackwood Football Club girl’s program and I’ve played there ever since and every year we’ve won the premiership. It’s just been such a good culture, all my best friends play there so that’s really how I started footy.”

Having started out scrubbing the ball off her shin, Venning has since added some polish to her game but remains a tough sort of ball winner who thrives at the contest. When outlining her strengths, the versatile talent was quick to list “contested ball wins” atop the tree.

“I really back myself,” she said. “I don’t really get intimidated by who I’m (against). I control if I’m going to get the ball or not, I’m not an outside receiver.

“I also think my marking’s quite strong. As a midfielder I can take a strong mark and be a link-up player, even on the kick-outs.”

Venning’s strengths made her a lock for SANFLW Team of the Year honours, and she brought the same kind of vigour to her state representative duties. With averages of 23 disposals, seven tackles, and four clearances per her three National Championship games, she also earned Under 19 All Australian status.

Speaking amid April’s Victorian leg of the carnival, she had both individual and team goals in mind.

“It’s been a really good achievement and I’m really excited just to show people what I’ve got,” she said. “I’m looking at it as an opportunity for me and the team to really utilise the talent we have in SA because it’s our standalone year.

“I’m just looking forward to showing my teamwork with others and it’s not just me, I want everyone to do well. But I still want to show that I am a strong player and I’m here to get drafted.”

While finding her way onto an AFLW list is the end goal, Venning is also seeking to succeed in her current Year 12 studies and knows missing out may not be the “be all and end all”. She also has a strong source of inspiration to look up to at the next level.

“An inspiration is Rachelle Martin, who was in my Westies team,” she said. “She inspires me because she worked so hard to get where she is now, playing for the Crows. “She’s a really hard worker, really nice, always caring to her teammates and that’s mainly what inspires me to keep going. I see her work ethic and I want to be like that.”

Come July 27 at the 2021 AFLW Draft, Venning has the chance to join Martin at Adelaide.