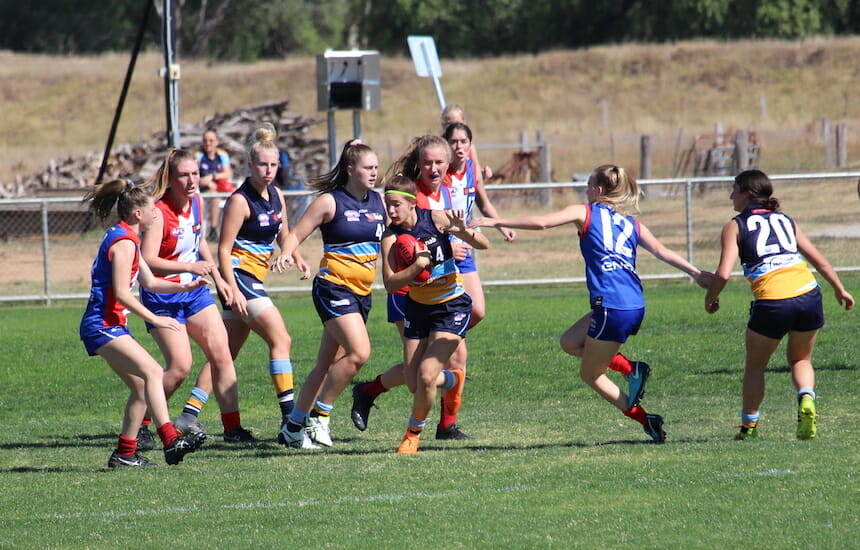 THE road to the AFL Women’s is not always straight forward, and for the 2020 draft-eligible players, a global pandemic was thrown in the mix. For aspiring Victorian AFLW Draft players, their top-age year was effectively thrown out the window, not able to play any competitive matches after March, and even were limited with training sessions. In this exclusive Player Diary, we get an insight into one of those player’s journeys.

Like every footballing journey, it starts somewhere and in the first of a two-part AFLW Draft Player Diary, ex-Bendigo Pioneers and now Western Bulldogs VFLW Player Brooke Hards outlines the highs and lows of her footballing journey from when she first picked up a ball, to the AFL Women’s Draft. Part two will feature Brooke’s 19th year in the VFLW and how she has adapted to playing senior football.

How my football journey started…

When it came to inter-schoolgirls footy sign ups, I made myself there pretty quickly, but calmly only because I did not want to show how excited I was until I got to actually play. It came to game days, representing my school Irymple Secondary College, I was in Year 9 at the time being very urged to get onto the football field just to have some fun tackling girls. My mum Nikki, came to watch that year, as a normal mum taking heaps of pictures and videos using up all her storage on her phone; she saw something in me. At the time she had a partner and showed him videos of me playing and she was very impressed because I’ve never played football before. My dad Jason was shown and told from the words “Brooke can play football” but at this time I was playing basketball and representing Sunraysia in netball. Dad knew I picked up a lot of sports quite well, but not this one. The next year came along fast being in my last year at Irymple Secondary College, luckily enough I signed up for the inter-schoolgirls team for the last year, this time not only mum came and watched again, but dad also came along to check it out, and by the end of the day, he was impressed too.

At this time my mind was set on trying to become a netballer, (I know I’m only 166cm) but I at least wanted to give it a crack. Representing Sunraysia for a fair few years, I got picked to try out for the Northern Zone Academy for netball, got knocked back until the next year came along, I got asked again and made it. Being a country girl from Mildura, every training was hours away, travelling majority weekends, clocking over the kilometres on dad’s cruiser car, but it was all worth it. In the meantime, with all that I saw something in the local paper about the Bendigo Pioneers coach Shawn McCormick and a couple of other people were heading to Mildura just to throw a footy even for a couple of hours to see some talent in Mildura. I attended it with my netball friends purely for some fun. A couple of months go by and something exciting was happening. I received an email saying I’ve been selected to represent the Bendigo Pioneers Girls Program in the V/Line Cup…

Starting my football journey later than average, from my first game playing an actual game of football was representing the Bendigo Pioneers team in the V/ Line Cup in 2017 as a 15-year-old. Being selected because not only did my parents see something in me, so did Shawn the Bendigo Pioneers Girl coach, but the funny thing was, I didn’t know all the positions, so dad had to draw me up an oval and mark where the positions were, and I was re-reading it before getting to my game. As you could imagine there was a lot of travelling again to make some trainings, but sometimes the coaches would come to Mildura to run some trainings which were good.

But at this time, I wasn’t only travelling for football, but netball as well. It started getting hectic, playing netball for my local club Irymple Swallows, to also playing Northern Zone netball, a couple games of basketball throughout the week, including training for both sports then increasing to football on weekends too. You’re probably wondering how I, myself, kept up with this and my family, well when your family can see that you have a desire to play these sports and to make it somewhere and to be somebody, they do their best to make it happen. Dad bought a notebook to sit me down to write down what we’ve got on during the week. He also had work throughout the day so you can imagine how tired he would be when it got to after school/work hours trying to get my brother Jordan and I to our trainings. At this time Jordan and I were week by week alternating weeks with both our parents, dad lived about 35km out of town which takes about 25-30 minutes each trip in, whilst mum lived in town which made it less difficult to swing around to trainings.

From only playing three games, to being asked to train in Mildura to potentially making the Under 18s Bendigo Pioneers team at the age of 15, going on 16 midways through the season, I was excited but very determined. From getting the inspiration from my brother, watching him play at local level in his dominating position full-back, I wanted to be trusted and relied on just like how he was from his coaches and teammates. Luckily enough getting selected in the team as an underage I learnt a lot from being picked every game to play, playing predominately in the back line/wing. There was a lot of great leaders I looked up to Megan Williamson (captain) playing for Williamtown now and Carly Isaac. They were always there offering guidance on and off the football field, but why I looked up to them was because I wanted to play a lot like them, hard at the footy, their endurance, run and carry, I loved it all.

Being lucky enough to represent the Bendigo Pioneers, I was also very moved by being selected to represent Victoria in girl’s football! Still trying to learn the pace of football, how to kick properly, running patterns, there was just a lot of learning still to be done, but having the coaching staff we did such as Emma Grant and Katherine Smith they were patient and always tried to deliver the best information as a new footballer coming through.

From a big preseason ahead, I was pumped to play more football, with not many Mildura girls training to try out there was roughly nine at the most, but not everyone would be coming to training so a lot of it, most there was five and that’s how we trained. Very lucky to have Nathan Manuel coaching us Mildura girls, he always pushed us very hard at training to give us the best opportunity to make the team.

After being selected as my second year for the Bendigo Pioneers team, I played a lot of midfield and won the tackle count out of the whole NAB League girls then got presented with best and fairest as an underage, and that night I got told that I had been selected in the Vic Country under 18s team, and I was only 16 turning 17.

A big opportunity was ahead of me and I couldn’t thank my dad driving me to majority of the games, so many hours and kilometres were clocked up and thank my mum always supporting me if she couldn’t make my games. I was picked for the Vic Country vs Vic Metro starting in the midfield, I learnt so much from playing with the likes of Lucy McEvoy, Molly McDonald, Sophie Molan and Sophie Locke. The next three games were in Queensland. I played two of them and didn’t get picked for one of them and Sophie Locke didn’t either. At this time dad flew down to Queensland to watch me and I was very lucky to have him there, whilst a lot of my teammates were very supportive and were there for me. I take that with me, massive learning curve and yes, I was upset but I still had a role for my team to play.

I was named captain with Annabel Strahan, I played three games and then suddenly COVID hit, no football for the rest of the year, halfway through the year I got a Draft Combine invite, trained hard, running every single day, doing gym, playing around with the football.

Night of the draft was a lot of emotions and feelings coming through, my family and best friend Annabel Hocking came over to my dad’s house. I had the closest people to me there supporting me, sadly I did not get drafted. I was down and put out of routine for a bit but was slowly finding my way back into it. Year 12 was becoming to an end and I was waiting to see if I got into university whilst waiting, I got a fair few phone clubs from different clubs wanting me to play VFLW for them and I had a lot of decisions I had to make. Had two meetings with two different clubs and had to make my decision. I got into Victoria University so I chose the Western Bulldogs VFLW team to go to, it was going to make things a lot easier for me and I was super excited.