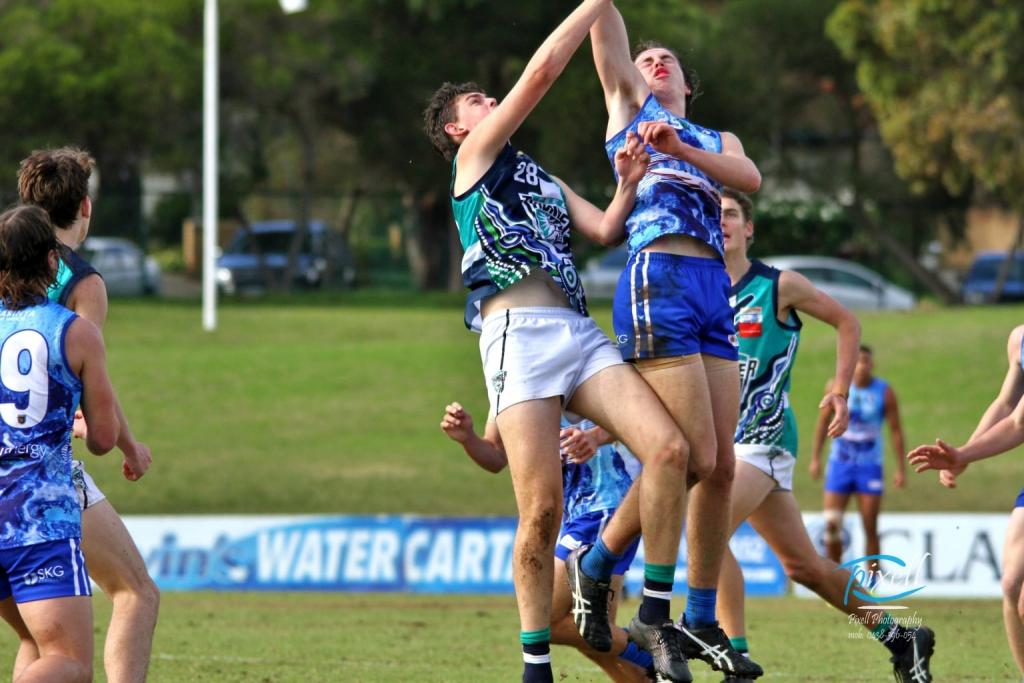 PEEL Thunder pulled off a memorable upset over East Fremantle on Saturday morning, coming from behind at each break to snatch victory within the last 90 seconds, 9.8 (62) to 7.16 (58).

The inaccurate Sharks were made to pay for their inability to shut the door on Peel, with their early control of the territory, midfield and scoring shot domination counting for little as they fell behind at the last hurdle.

16-year-old Koen Sanchez had the chance to win back the points for East Freo with a flying shot in the last 30 seconds, but pulled it wide to seal the result in soggy conditions at New Choice Homes Park.

We take a look at a few of the top performers from either side in our Scouting Notes, and go around the grounds with some of the other outstanding Colts performances out of Round 13.

The 2005-born talent is an exciting prospect for the future, and started brightly in his latest WAFL Colts outing. Sanchez was stationed out on the wing and provided really good drive between the arcs, running hard and proving a quick thinker in possession. He unfortunately put wide a game-winning opportunity in the last 30 seconds, but it was a decent effort on the fly from the 16-year-old.

Hagan was another who started well, contributing the first two scores of the game – albeit both behinds. As a permanent fixture in midfield, the bottom-ager was wonderfully clean below his knees and clever at the contest, able to win the ball at will and draw free kicks under pressure. He again found plenty of the ball with 26 disposals, working to all areas of the ground with smooth movement and slick ball use. Looks a dead ringer for recent North Melbourne draftee, Will Phillips.

As he so often does, Browne finished Saturday’s game as the clear leading ball winner, racking up 33 disposals and looking particularly ominous in the first half. He was the go-to midfielder at stoppages, often able to get first hands on the ball and move it on cleanly by hand. His quick clearing kicks were less effective and not quite penetrative, but Browne consistently got his hands on the ball and corrected some of those deficiencies. After spurning a set shot opportunity in term two, he straightened up to slot one home in the following quarter.

One of the more polished players afield, McVee was able to display his smooth movement on the rebound off half-back. He positioned well to intercept across the backline, before distributing nicely by foot. His composure on the ball pointed towards great class, and there were a couple of instances where McVee spun out of tight spots or sold candy to keep the play moving fluently.

The Melbourne father-son hopeful was another of East Fremantle’s prolific ball winners, providing good drive out of the engine room. He often received the ball facing forward, or had momentum going that way, which he continued with his carry and capped off with clean kicks. He began to find more of the ball away from the contest after half time and snuck forward to drill through a terrific goal in the final term.

In his first WAFL Colts outing for the season, Bartlett showed some promise and class in the front half. The Fremantle NGA prospect has slick hands and a punchy kind of kick, which he used to get creative at half-forward. He presented well and took a couple of clean overhead marks, but mostly caught the eye with his goal at the start of the fourth term. He had also kicked one in the second quarter but missed another late set shot chance and even gave a couple off.

14 disposals and six marks do not quite do justice to the mark Cleaver made at half-back, with his no-frills kind of approach proving important in the defensive half. The solidly built bottom-ager was exactly that – solid – as he saw most of his possessions on the defensive side of the corridor where he looked to distribute with short kicks. While there was nothing spectacular about his game, Cleaver played his role well and was handy in most departments.

Spending more time in the ruck than usual, Williams had his work cut out for him but still managed to put up good numbers with 17 disposals, five marks, 18 hitouts and 1.2 on the scoreboard. The versatile tall prospect was shrewd with his ruck bodywork and just as clever in his ability to peel off after initial forward marking contests. He showed this on two occasions, with both breaks leading to set shot opportunities and the first resulting in a goal. He was typically assured in the air, but could be a touch stronger when bodied in contests.

Finch popped up to be one of Peel’s best midfielders in crucial moments, including a couple of centre bounce breaks during term four. He also came up clutch with the game-winning goal with 90 seconds left on the clock, winning a free kick inside 50 before coolly converting. With crafty movement and foot skills, Finch impacted both at the fall of the ball and coming away from the contest.

Hough spent plenty of time forward before shifting back into midfield, proving another who stood up in the tough moments. He provided Jackson Klepzig with the game’s first goal, breaking over the back in transition and kicking long inside 50. He really started to get going after half time, helping Peel shift into attack with positive forward carry. The state Under 19 squad member lifted his urgency late on, breaking tackles and looking to move inside 50 quickly.

The mobile tall again rotated into the ruck from his key forward post, moving well in both roles and taking the game on with vigour for a player of his stature. Polson looked ominous in the early-goings with a solid mark and shot on goal, but popped up for more moment- type plays as the game wore on. He was not afraid to back his athleticism to burn opponents or move through traffic, and his effort to break multiple tackles led to Blake Offer’s important fourth term goal.

Offer was the most effective key forward afield in terms of scoreboard impact, booting a game-high three goals with each of them coming in different terms. He got on the board with two set shots in the opening half, and snapped a clutch goal in the final quarter to help draw Peel back within two goals. His clean finishing proved key to the Thunder’s comeback victory as East Fremantle faltered.

The bottom-aged tall showed some nice signs throughout the match, using his height advantage well in the ruck and hitting to dangerous zones at stoppages. He won a game-high 24 hitouts, competing plenty against highly touted Sharks prospect, Jack Williams. Broadbent only notched eight disposals and spend a good amount of time forward, but did his best work in the ruck.

Another of Peel’s state Under 19 squad members, McIlvinney was strong in his usual defensive post and did most of his best work aerially. He took four marks for the day, winning one-on-ones inside defensive 50 and using his reach to advantage to pluck the ball at high points.

Subiaco earned a thumping 70-point win over Perth to open the round, with leading Lions prospect Matthew Johnson notching 28 disposals, nine marks, 10 tackles and a goal. Jed Kemp (33 disposals) was also prominent, while Jacob Evitt (23 disposals, two goals) and Ezekiel Bolton (22 and three) found plenty of the ball and the goals.

Claremont were the other big winners in Round 14, trouncing South Fremantle to the tune of 68 points away from home. Small forward Jahmal Stretch booted four goals to prove his credentials as a state squad member, as ball winners Angus Sheldrick (28 disposals) and Talon Delacey (22, one goal) went to work. Caleb Stephens was again prolific for the Bulldogs, winning a game-high 29 touches and snagging a goal.

A few Colts guns were also sighted at League level, headlined by the debut of East Fremantle midfielder Corey Warner. The brother of Chad managed 14 disposals and five marks in his maiden outing, making for a solid start to his senior career. Claremont forward Jacob Van Rooyen made another appearance as the Tigers lost to South Fremantle by a point, while Fremantle NGA prospect Jesse Motlop kicked a goal for the Bulldogs’ Reserves.