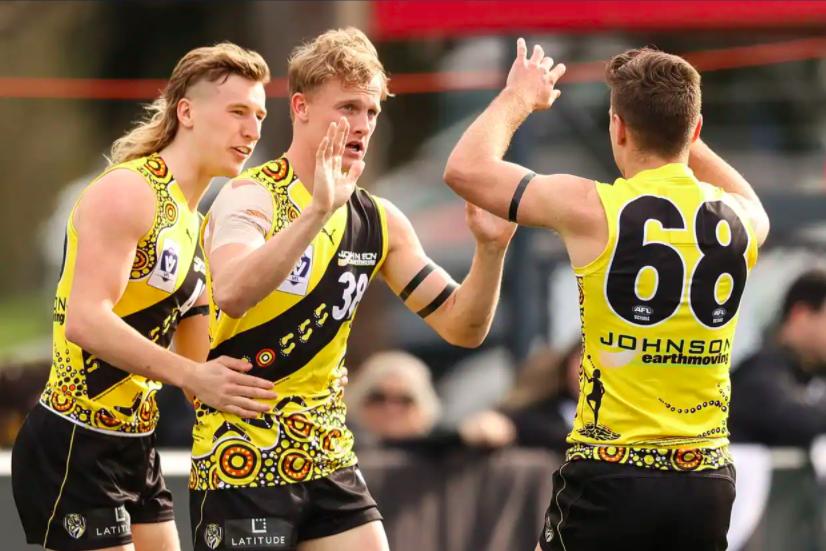 A BUNCH of up-and-coming talents pressed their claims for senior selection across the state leagues this past weekend, with finals time drawing closer in the top tier. The West Australian Football League (WAFL) made its return after a week away due to lockdown, while it was business as usual around the nation with just over a month of home-and-away action left to play out. We run you through all the results from around the nation and what they mean moving forward in this week’s state leagues wrap.

The Battle of Bell Street headlined Round 13’s action in the VFL, with the Northern Bullants holding on to win by a single point against traditional local rival, Coburg. Players did justice to the resumption of this long-standing rivalry, though the Lions’ last ditch surge was not enough to snatch victory at Piranha Park. Bullants big man Daniel Hughes took home the inaugural Harold Martin Medal as best afield, having finished with 18 disposals and 35 hitouts.

While the Bullants picked up their third-consecutive win, Footscray avoided a major boilover to remain undefeated in 2021, defeating Sydney by seven points on the back of a six-goal final term. The Bulldogs twice trailed by as many as six goals throughout the contest, but did enough to power past the plucky Swans outfit. Patrick Lipinski‘s claims for a recall remain strong after 36 disposals and a goal, while tall Sydney pair Logan McDonald (14 marks, four goals) and Patrick McCartin (27 disposals, 11 marks) dominated the airways.

Collingwood and Geelong remain fixed in the top eight after earning their own closely contested victories, downing 2019 grand finalists Richmond and Williamstown respectively. The Cats lead at every break in their 12-point triumph, while senior-listed midfielder Charlie Constable (30 disposals, seven tackles, one goal) continuing his ominous form, while young forwards Jack Ginnivan (four goals) and Noah Cumberland (five) were sensational in the Magpies’ five-point salute on enemy territory.

While Port Melbourne was thumped by 95 points in Frankston on Friday, the Borough’s home deck was used on Saturday to field the clash between Greater Western Sydney (GWS) and Gold Coast. The Giants, who had a handy mix of AFL-listed players and academy products, ran out 40-point winners with Zach Sproule (five goals), Matt De Boer (35 disposals, three goals), and senior skipper Stephen Coniglio (36 disposals, eight tackles) proving a class above.

Casey and Sandringham were the other Victorian sides to register premiership points in Round 13, while Southport returned to the fray with a resounding 109-point romping of Brisbane. The result sees the Sharks sit a win clear in second, still an equal amount of points away from current frontrunner Footscray. The Round 14 fixture has also been announced, with both Sydney teams having the bye while Queensland travel is set to resume for a trio of Victorian clubs.

Ladder position counted for plenty in Round 14 of the SANFL, as all of the top five sides registered wins against their bottom five counterparts. The handful of fixtures took part on a super Saturday of state league action, which did little to really shake up the order of things ranking-wise.

Reigning premier Woodville-West Torrens opened proceedings with a 19-point win over the bottom-placed West Adelaide, despite managing just nine goals from 30 scoring shots. Westies tidied up the margin with three final term consolation goals, but the Eagles’ scoring power was all too much in the end. Jack Hayes had a day to remember for the victors, clunking 20 marks (seven contested) and booting two goals, while prolific small forward Tyson Stengle managed 3.4 from eight touches.

Competition frontrunner Glenelg pushed its undefeated streak out to 13 games with a 30-point win over Sturt, kicking away in a five-goal to one third term. Bays spearhead Liam McBean booted six goals in a commanding display, as Lachie Wilsdon snared eight in North Adelaide’s 48-point salute over Central District. The likes of Harrison Wigg (42 disposals, nine clearances), Samuel McInerney (24 disposals, five goals), and Campbell Combe (29 disposals, two goals) were among the Roosters’ other outstanding individual performers.

North’s win opened up a gap to Port Adelaide in sixth, after the Magpies went down to Norwood by 36 points. The usual suspects were amongst it for the Redlegs, with Mitch Grigg (31 disposals, seven clearances, one goal), Richard Douglas (30 disposals, eight clearances), and Brad McKenzie (24 disposals, two goals) all in the thick of things. South Adelaide was the weekend’s other winner, with pick one contender Jason Horne (19 disposals, one goal) again catching plenty of eyes as his Panthers got the better of Adelaide.

Launceston took out a crucial TSL top-of-the-table clash on Saturday, downing North Launceston by 53 points to strength its spot as the league leader. The Blues now boast a two-game gap to their closest rival, and consolidated their latest victory with five goals to nil in the final quarter. Brayden Pitcher booted six majors to spearhead the Blues’ win, Jake Hinds and competition stalwart Jay Blackberry took out votes as the best two players afield.

Fellow top four sides Tigers and Clarence also picked up wins against the bottom two teams, in North Hobart and Lauderdale respectively. The Tigers accelerated during a five-goal second term to end up 40-point victors on the road, while Colin Garland snared another bag of six goals as his Roos wrapped up a 49-point win on home turf. Both sides remain locked on 32 points, with Clarence ahead in third by 0.23 per cent.

The WAFL returned after last week’s lockdown with crowds enjoying five fixtures across a stacked Saturday of state league football. The home sides won out in four of those games, while Subiaco shot back to the top of the table as the race for minor premiership honours heats up.

Claremont’s one-point loss to South Fremantle opened the door for Subiaco to reclaim top spot on percentage, though all three teams now sit level on eight wins with a two-pronged chasing pack ready to pounce at just one game adrift. The top five looks relatively set, with a three-game gap now opened up between Swan Districts in fifth and Peel Thunder in sixth.

Swans scraped past the ever-improving West Coast by two points to remain in the hunt with West Perth, as the Falcons had a much easier time defeating East Perth by 30 points. Geelong champion Harry Taylor returned to East Fremantle and booted four goals as Corey Warner, the brother of Chad made his League debut, but their efforts were not enough to help overcome the Thunder in a 26-point loss.