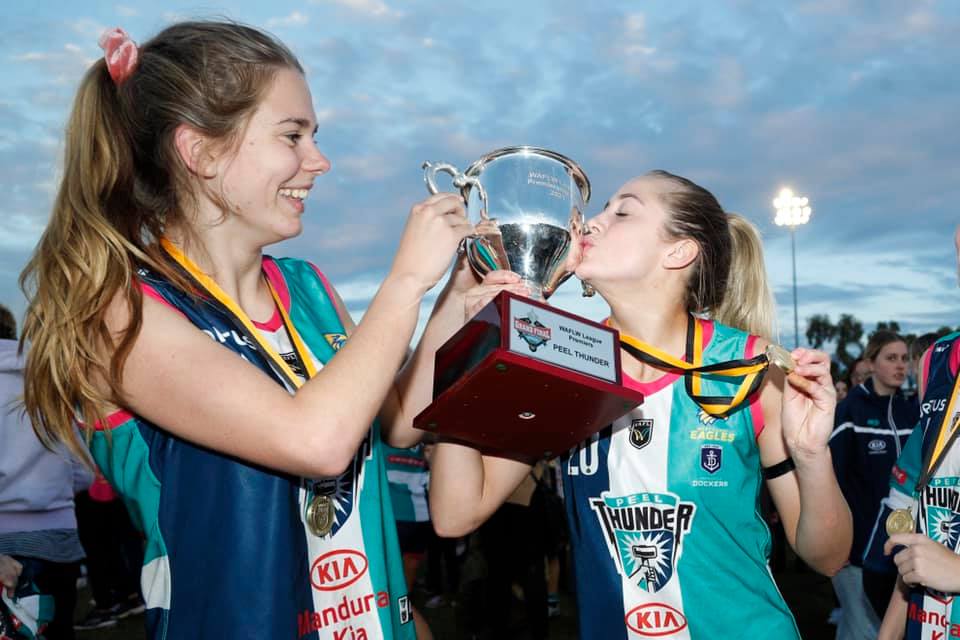 PEEL Thunder claimed their second successive flag with a memorable 5.6 (36) to 2.3 (15) win over Swan Districts on Sunday. Whilst plenty of AFL Women’s talent stood up, we took a look at how some of the State Academy members performed from both sides. Note: Any statistics cited are manually taken. All notes are the opinion of the individual writer.

The youngster found a heap of the ball throughout the game, working hard in close and using it by hand or foot to extract it from the stoppages. At times she was rushed and under pressure, but she was able to amass the most touches of any of the Under 19s or Under 17s players, picking up 18 disposals, with three marks and three inside 50s. Whilst the experience around her found plenty of it, Fenton did not look overawed on the big stage and showed some promising signs for the future.

A young talent in the making shoed a lot of promising plays. Her ability to run through traffic, does the job for her team, picks the ball up runs and kicks it inside her teams’ advantage 50, that results as a set shot on goal. Great performance very early into the game, used her speed and her control including her football smarts to kick it over into grass to let her teammates run onto it. Four minutes left in the first term; Roberts struggles to hold onto the mark but can always keep tracking the ball to make sure she keeps it in her teams’ possession. She provided great tackling pressure creating ball ups giving her team time to set up.

Almost kicking a goal, she showed her smarts by turning and snapping but just missing. Ten and a half minutes into the second term, Roberts just misses the mark but straight away and turns and picks it up nicely and runs and carries, takes one bounce only just going her way, right kick inside 50 but Jaime Henry was too good and intercepted the mark for her team. Beautiful set of hands from a kick from teammate Sabreena Duffy, goes for a goal from 30m out and just misses. Roberts has been consistent, and her intensity was outstanding throughout all four quarters.

In the second term, Britton drove the ball deep from a smart quick run and carry, something she did on numerous occasions throughout the game. Whilst not having a heap of it, Britton did enough up with about eight kicks, a couple of marks and three inside 50s to keep the ball moving in transition and the Swan Districts defence under pressure. The Under 19s State Academy captain worked hard throughout the four quarters and continued to remain an option providing good metres gained.

Had a promising game to finish with 11 disposals, three marks and an inside 50. In one instant she had a great handball out into space to teammate that gives them a clear inside 50. She buzzed around the half-forward line and always looked lively, working hard as an attacking player looking to go forward.

Helped chop out in the ruck and competed well against Under 19s teammate Sarah Lakay. Had the four touches, two marks, two tackles and seven hitouts for the match, breaking even in her one-on-ones.

Had an early impression four minutes in the first term, out in the open 40m out and goes to the right as a behind. The wind impacted that shot for goal, but the wing showed plenty of run throughout the match. Whilst she did not always win a heap of the ball, she provided good spacing and had some nice touches late in the game, often getting around the contest.

Not her most prolific game but still had some important clearances and tackles, finishing with nine disposals, two clearances and three tackles. She worked hard throughout and rotated through the middle, having less time and space than in some games.

Hardy provided a number of smart handballs to clear the ball out into space to teammates. She marked on the chest from a kick outside of their 50m and she sends it back in there as quick as she can without wasting time. She also showed off her game smarts by rarely ever turning the ball over when she has it in her hands.

Read the play very well, from a kick inside 50m from Ella Roberts on the opposition team, Henry read the play and intercepted the mark that would have saved her team from the opposition getting a goal. The important third quarter with 10 minutes remaining, Henry took the ball and opposition on with dodging and weaving through two players and kicks it to Mikayla Hyde through the middle of the ground. After a quieter start, Henry had a productive 13 disposals, three marks and four rebound 50s, having to often battle against Kira Phillips.

Had some quick disposals throughout the game and won a 50m in range of the goals, however moved the ball too fast and low and kicked onto the player on the mark. She finished with seven touches for the game and showed some good signs for the coming years.

Showcasing her speed and skill, at one stage Taylor won it out of the middle and went for a run, with a quick kick inside their 50 that gave the Swans a chance on goal. Laid three tackles and had a couple of inside 50s to go with her five kicks.

Lakay was a very dominant tap ruck throughout the game. Early in the second term, Lakay wrapped up an opponent and won a free kick. Getting the free kick early in the second term, she showed she is not only good at rucking, but also very good at ground level as well. The standout ruck on the ground with nine disposals, three marks, 16 hitouts and two inside 50s. One of the better Swans players in the first half of the match.